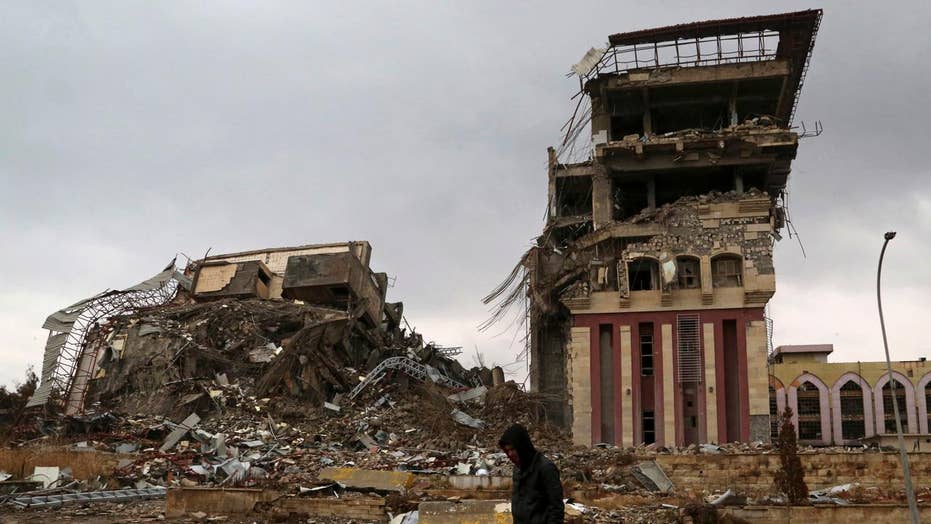 Iraqi VP warns of dangerous terrorist alliance in the works

More than 30 U.S.-backed Syrian and Iraqi Kurdish fighters were killed in a series of airstrikes carried out by Turkish jets on Monday, two American defense officials confirmed to Fox News.

Dozens of fighters were also wounded in the strikes. Both officials said there were no U.S. troops among the fighters who were hit. The closest U.S. soldiers were about six miles from the site of the strikes.

“This is very serious,” said one outraged U.S. official.

U.S. and Russian troops in the areas of the attacks were warned about an hour before 24 Turkish jets and two Turkish drones bombed locations in northern Iraq and northeast Syria. Senior Russian officials contacted U.S. counterparts to try to get Turkey to back off the strikes, but those pleas were ignored by the Turks, officials said.

"This is very serious."

“Given the extraordinarily complex battlespace in these areas, it is vital that Turkey and all partners in the defeat-ISIS effort coordinate their actions closely as we work together to maintain maximum pressure on ISIS and ensure the safety of all Coalition personnel in theater,” Pentagon spokesman Maj. Adrian J.T. Rankine-Galloway told Fox News.

U.S. officials told Fox News that Kurds were not warned in advance of Turkish airstrike.

Turkish President Recep Tayyip Erdogan responded: “We are obliged to take measures. We must take steps. We shared this with the U.S. and Russia and we are sharing it with Iraq as well,” Reuters reported.

Earlier this month, Defense Secretary Jim Mattis hosted his Turkish counterpart, Fikri Isik, at the Pentagon for talks about the upcoming Raqqa offensive in Syria.

Both secretaries ignored a question from a reporter about the role Kurds would play in that operation.

There are currently about 1,000 U.S. troops on the ground in Syria. In March, 400 Marines deployed to Syria as part of an artillery battery to support U.S.-backed troops fighting around Raqqa.

The U.S. Air Force uses a Turkish airbase near the border with Syria to conduct strikes against ISIS.

Last week, Fox News reported ISIS leaders and hundreds of “bureaucrats” had been seen by U.S. military drones fleeing the terror group's so-called capital during the past two months and heading to the Syrian city of Deir ez-Zor, located 90 miles southeast of Raqqa. Some also fled to al-Mayadin, further down the Euphrates River and the location where U.S. special operations forces killed a mid-level associate of ISIS leader Abu Bakr al-Baghdadi late last week.

The U.S. views the Syrian-Kurdish People’s Protection Units, known as the YPG, as key allies in the fight against ISIS. Turkey views the group as an extension of the Kurdistan Worker’s Party, or PKK, a Turkish insurgent group that has conducted a decades long insurgency that's killed thousands. Both Ankara and Washington consider the PKK a terrorist organization.

Turkish airstrikes hit PKK positions "on and around Mt. Sinjar" earlier in the day, resulting in five deaths, according to a statement from the Ministry of Peshmerga Affairs.