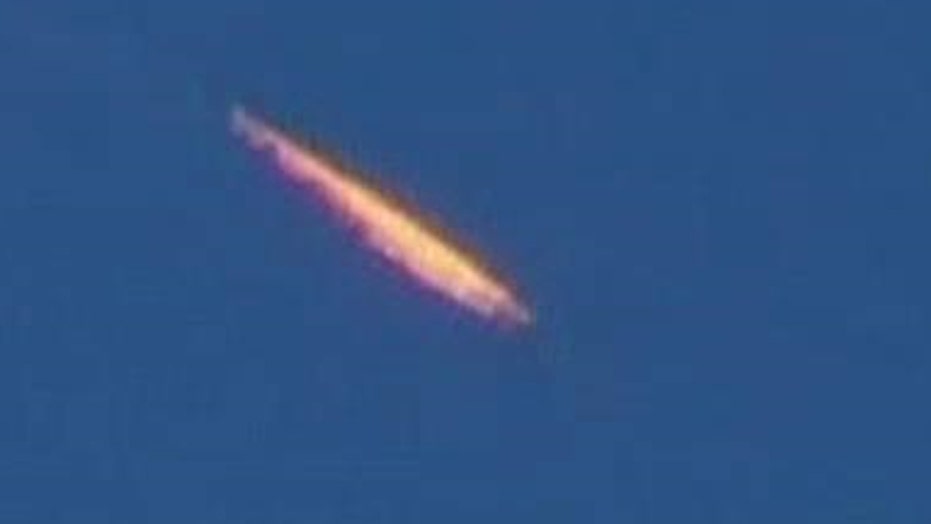 Russia calls action a 'stab in the back'

Russian President Vladimir Putin said Tuesday that Turkey’s decision to shoot down a Russian warplane near Turkey's border with Syria is a "stab in the back" and it would have “significant consequences” for its relations with Turkey, as NATO called an emergency meeting over the incident.

Putin said the Russian Sukhoi-24 jet was shot by a missile from a Turkish jet over Syria about just over a half-mile away from the Turkish border, which he described as a "stab in the back by the terrorists' accomplices." Turkey said it warned the jet several times that it was in its airspace.

Putin was meeting with Jordanian King Abdullah II in Sochi. Prior to the meeting, The New York Times said Putin was "speaking slowly and clearly angry."

NATO called an emergency meeting in Brussels on Tuesday after the incident.

"The aim of this extraordinary North Atlantic Council meeting is for Turkey to inform allies about the downing of a Russian airplane," NATO's deputy spokesperson Carmen Romero told the Associated Press.

A spokesman for the U.S.-led coalition based out of Baghdad said the U.S. indeed heard Turkey on "open channels" issue 10 warnings to the Russian jet before the incident. Reports out of Russia also say a military helicopter was shot at in Syria, killing one serviceman. The helicopter was reportedly on a rescue mission.

Rebels said they fired at the two parachuting pilots as they descended, and that one had died. A rebel spokesman said they would consider releasing the body in exchange for prisoners held by Syria. The fate of the second pilot was not immediately known.

VIDEO: Raw footage of Russian jet being shot down

“This will get complicated,” the official said.

Tuesday's incident is the first time since the 1950s that a Russian or Soviet military aircraft has been publicly acknowledged to have been shot down by a NATO country, according to Reuters.

President Obama, at a joint press conference with French President François Hollande, cautioned that information about the incident was still emerging and discouraged escalation. He added that Turkey had a "right to defend its territory and its airspace."

The president said the shootdown underscored an "ongoing problem" with Russia's military operations in Syria, where the Russians have been targeting groups near the Turkish border. The incident also shows a need to move forward quickly on a diplomatic resolution to the conflict in Syria, he said.

Russia said the Su-24 was downed by artillery fire, but Turkey claimed that its F-16s fired on the Russian plane after it ignored the warnings.

“This will get complicated”

Putin warned that the incident would have "significant consequences" for its relations with Turkey and criticized Ankara for turning to NATO to discuss the incident instead of first explaining to Russia what happened.

A U.S. official confirmed to Fox News that the Russian Su-24 was downed north of the Syrian port city of Latakia.

The official told Fox News that the Su-24's two pilots parachuted and were last seen attempting to evade capture. Two Russian helicopters were airborne to attempt a rescue mission.

A video that was later released by Syrian rebels showed one of the pilots dead, while the fate of the other one is unclear.

Jahed Ahmad of the 10th Brigade in the Coast, a rebel group, told The Associated Press that the two Russian crew members tried to land in their parachutes in government-held areas after they ejected, but came under fire from members of his group.

He added that rebels shot one of the pilots, who landed dead on the ground on Tuesday.

The group released a video showing gunmen standing around a blond pilot whose face was bruised and appeared dead.

Ahmad said his group would consider exchanging the body of the pilot with prisoners held by the Syrian government.

"This is the body of a Russian member of the military who was killing Syrian people," he said. "We have the body and we will see what to do with it."

Video footage of the incident showed the Russian plane on fire before crashing on a hill.

Rami Abdurrahman, who heads the Britain-based Syrian Observatory for Human Rights said the warplane crashed in the Turkmen Mountains region in the coastal province of Latakia. The region has been subjected to an offensive by Syrian government forces over the past several days under the cover of Russian airstrikes. The area is controlled by several insurgent groups, including Al Qaeda's branch in Syria, the Nusra Front, and the 2nd Coastal Division that consists of local Turkmen fighters.

A Turkish military statement said the plane entered Turkish airspace over the town of Yayladagi, in Hatay province. It said the plane was warned 10 times within the space of 5 minutes.

Russia denied that the plane ever crossed the Syrian border into Turkish skies.

"We are looking into the circumstances of the crash of the Russian jet," the country's Defense Ministry said in a statement. "The Ministry of Defense would like to stress that the plane was over the Syrian territory throughout the flight."

A statement from Turkish Prime Minister Ahmet Davutoglu's office said the Turkish leader spoke with Turkey's military chief and foreign ministry about the incident. It said Davutoglu would start "initiatives" within NATO and the United Nations.

On Friday, Turkey's Foreign Ministry summoned the Russian ambassador demanding that Russia cease operations in Syria targeting Turkmen villages, saying the Russian actions did not "constitute a fight against terrorism" but the bombing of civilians. Ambassador Andrey Karlov was warned during the meeting that the Russian operations could lead to serious consequences, the ministry said.

Turkey changed its rules of engagement a few years ago after Syria shot down a Turkish plane. According to the new rules, Turkey said it would consider all "elements" approaching from Syria an enemy threat and would act accordingly.

Following earlier accusations of Russian intrusion into Turkish airspace, the U.S. European Command on Nov. 6 deployed six U.S. Air Force F-15 fighters from their base in Britain to Incirlik Air Base in Turkey to help the NATO-member country secure its skies.

Despite harsh words, some analysts believe that Russia and Turkey have reasons not to let the incident escalate.

"Relations have been very strained between Russia and Turkey of late so Moscow will be trying its utmost to contain the damage this might cause," said Natasha Kuhrt, lecturer in International Peace and Security at King's College London. "It's a serious incident in anybody's book," added Ian Kearns, director of the European Leadership Network, a London think-tank.

The European Command said the deployment was "in response to the government of Turkey's request for support in securing the sovereignty of Turkish airspace."