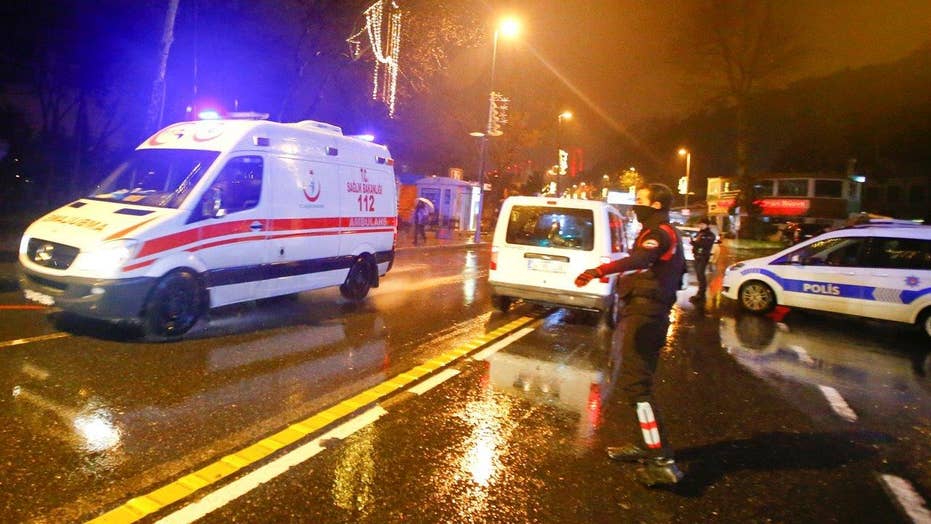 Once the West’s safe, stable and fiercely secular portal into the Middle East, Turkey’s bloody 2016 showed the perils of its position between two worlds.

A dramatic coup attempt, 100 terror attacks that killed more than 500 people, the brazen assassination of a Russian diplomat and a shocking nightclub attack that left 39 dead in Istanbul on the final day of the year underscored the precarious status of the key Muslim nation and NATO member. Turkey’s descent into violence was driven by jihadists and refugees passing each other on their way to and from the killing fields of Syria and Iraq, an increasingly Islamist and authoritarian President Recep Tayyip Erdogan and terrorists domestic and foreign.

Experts say there is little reason to expect things to improve, and some fear the military and economic powerhouse could continue to unravel amid sectarian violence, political infighting and terrorism.

“… under Erdogan’s personal rule, Turkey’s destabilization is likely to continue,” Svante Cornell wrote in a July blogpost for the Wilfried Martens Centre for European Studies. “Thus, European leaders now need to see what has been obvious for some time: rather than an ally with which to handle regional problems, Turkey will itself increasingly be the problem.”

The nightclub attack, for which ISIS claimed credit, came less than a month after two separate car bomb attacks by Kurdish militants killed around 60 Turkish security forces within the same week. While mass killings by ISIS and Kurdish militant groups gained strong momentum in Turkey in 2016, a July 15 coup attempt allegedly by followers of Pennsylvania-based cleric Fethullah Gulen was the most dramatic challenge to stability.

The threat from ISIS represents an ominous turn of events. Erdogan was long criticized for his soft stance against the terror group, going as far as providing militants medical care in Turkish hospitals. Russia also accused Turkey of facilitating the lucrative black market oil trade that brought billions of dollars to ISIS during its rapid ascent.

Now, the black-clad jihadist army appears to be exporting more than oil into Turkey.

"There is a suicide bombing craze in the region,” said Metin Gurcan, a security analyst and columnist at T24, citing reports of more than 1,000 suicide attacks in Syria and Iraq in the last 13 months. “There are tens of thousands of ISIS militants squeezed between Iraq and Syria with nowhere to go, and they are fleeing to Turkey and carrying their operational skills as well."

It is not clear how many of the 100 terror attacks inside Turkey were perpetrated by ISIS. Some were of small scale like mine explosions, while others brought heavy casualties. One of the most prominent was the assassination of a Russian ambassador in December by a member of the Turkish police who shouted “Allahu Akbar” and “Don’t forget Aleppo” as he fired 9 bullets into the ambassador at an art gallery, sending shockwaves around the world.

While Turkey blamed the Gulenists for the assassination, it appeared that the radicalized police shouted a chant affiliated with a jihadist militant group in Syria, known as Al Nusra and affiliated with Al Qaeda.

Several months before this incident, in June 2016, three ISIS suicide bombers stormed Istanbul’s Ataturk Airport with automatic assault guns killing at least 45 people and injuring 236 before blowing themselves up.

The July coup attempt resulted in clashes between armed forces and civilians that left around 250 people dead and more than 2,000 injured in a single night, while the Turkish government dismissed hundreds of thousands of people from their jobs in a purge in the aftermath.

As Turkey finds itself increasingly threatened by deadly attacks from a variety of foreign and domestic enemies, Erdogan has responded by consolidating power and implementing an increasingly more Islamicized agenda.

"We are facing a Turkey that is feeding the arguments of the old times into a new argument, but is putting the Ottoman to the core of that new argument,” said Serhat Guvenc, professor of international relations at Kadir Has University and a security analyst. “What is new is that the extent of religion, of Islam, in this amalgamation is at the forefront much more."

However, Erdogan’s growing dominance has not brought calm, say critics. On the contrary, they say, his absolute control over almost all of the state institutions has only further polarized the population with secularists against Islamists, Turks against Kurds, and Erdogan supporters against the main opposition groups. A group visiting the site of a car bomb attack in Istanbul’s central district of Besiktas in early December that killed 37 people attacked a propaganda car belonging to the secularist opposition party. In addition, ultra nationalist groups staged small theatrical acts in different cities playing Ottoman marches and putting a gun against the head of a man dressed as Santa Claus, condemning Christmas and New Year celebrations.

A big banner also was hung in Istanbul depicting a man in Islamic dress punching Santa in the face, telling him Christmas and New Year celebrations were un-Islamic.

Once a stronghold of secularism, following the footsteps of founder Mustafa Kemal Ataturk in a region devastated by sectarian violence and dictatorial ambitions, Turkey is increasingly finding itself in the midst of an engulfing chaos. Its status as a bulwark against terror and sectarian violence will continue to be tested in 2017, experts agree.