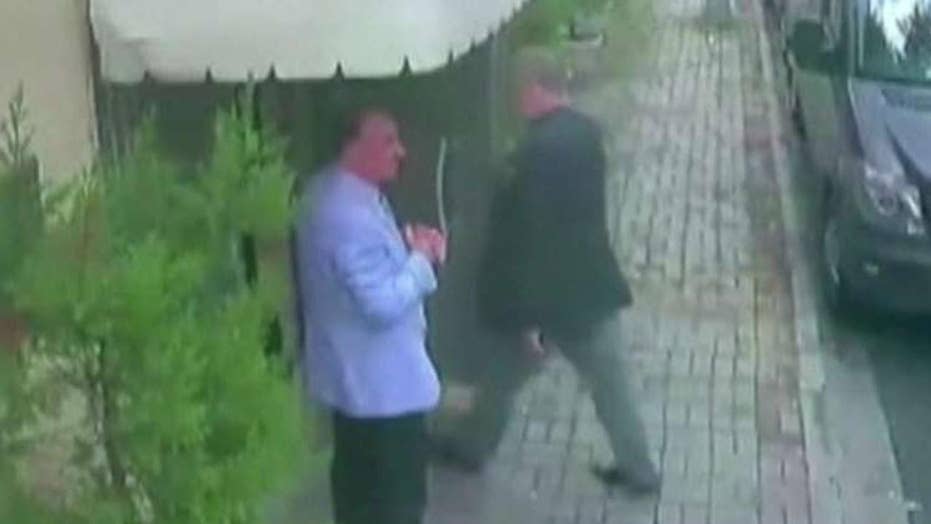 Turkish officials have told their American counterparts that they have audio and video recordings that prove writer and activist Jamal Khashoggi, a Washington Post contributor, was murdered inside the Saudi consulate in Istanbul earlier this month, the paper reported late Thursday.

The recordings would represent the first hard evidence to support the Ankara government's contention that a 15-member "assassination squad" apprehended Khashoggi after he entered the consulate on Oct. 2, then killed him and dismembered his body. Previously published surveillance footage shows the 59-year-old Khashoggi entering the consulate. Saudi officials have claimed that he left the building by a different way and they do not know his whereabouts.

The report added that Turkish officials have balked at releasing the recordings out of fear it would compromise intelligence methods.

Turkish media, including sources close to the government of Recep Tayyip Erdogan, have previously claimed that Saudi royal guards, intelligence officers, soldiers and an autopsy expert had been part of the team flown in on the day Khashoggi vanished.

Khashoggi, who has repeatedly criticized the Saudi leadership in columns for the Post, had gone to the Istanbul consulate to get marriage paperwork as his fiancee waited outside. The fiancee, Hatice Cengiz, has led calls for the Trump administration to shed light on Khashoggi's fate.

In an interview with "Fox & Friends" Thursday morning, Trump said that  "we have investigators over there and we're working with Turkey" and with Saudi Arabia on the case, but he provided no evidence or elaboration. Later in the day, Trump told reporters at the White House that "if it turns out to be as bad as it might be, there are certainly other ways of handling this situation" besides canceling sales of U.S. weapons to the kingdom.

An Erdogan spokesman told the state-run Anadolu Agency that Turkey and Saudi Arabia would form a "joint working group" to look into the journalist's disappearance.

In Washington, State Department spokeswoman Heather Nauert said that the Saudi ambassador to the U.S. was traveling to Saudi Arabia, and that the U.S. expects him to provide information about the Khashoggi case when he returns. She added that the U.S. had not requested the ambassador, Prince Khalid bin Salman bin Abdulaziz, to leave.