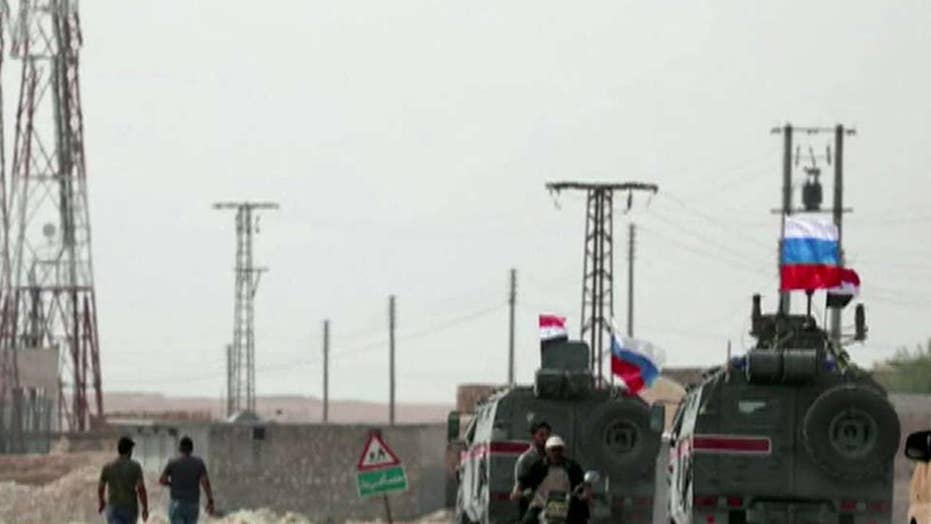 Officials are reviewing plans to evacuate up to 50 U.S. nuclear bombs that have long been stored at Incirlik Air Base in Turkey in the wake of Ankara's military offensive in northern Syria, according to a report.

The Cold War-era B61 nuclear bombs are said to be located 100-250 miles from the Syrian border, according to The Guardian. A former U.S. official told the outlet that Turkish diplomats responded to suggestions about moving the bombs by saying Turkey would start to develop its own.

"The potential problems have been discussed for over a decade," the former official said. "And now we’ve finally gotten to a point where this is a problem that we can’t ignore anymore."

President Trump announced on Oct. 6 that the U.S. would pull all troops from northeast Syria, clearing the way for a Turkish air and ground incursion. Erdogan's troops launched an assault on Wednesday and ground forces invaded later that day.

The Pentagon said Friday that U.S. troops near the border town of Kobane in northern Syria came under artillery fire from Turkish positions. No American troops were injured.

In an interview with Fox News, a senior adviser to Erdogan denied that Turkey had fired at U.S. troops.

“I think this is a first — a country with U.S. nuclear weapons stationed in it literally firing artillery at U.S. forces,” said Jeffrey Lewis, from the California-based James Martin Center for Nonproliferation Studies, The Times reported.

In this image provided by Hawar News Agency, ANHA, U.S. military vehicles travel down a main road in northeast Syria on Oct. 7. U.S.-backed Kurdish-led forces in Syria said American troops began withdrawing Monday from their positions along Turkey's border in northeastern Syria, ahead of an anticipated Turkish invasion that the Kurds say will overturn five years of achievements in the battle against the Islamic State group. (ANHA via AP)

Trump said Monday that U.S. troops in northeastern Syria will be withdrawn from the country as planned and redeployed “in the region to monitor the situation and prevent a repeat of 2014,” when the Islamic State terrorist group (ISIS) made major territorial gains.

"After defeating 100% of the ISIS Caliphate, I largely moved our troops out of Syria. Let Syria and [President Bashar al] Assad protect the Kurds and fight Turkey for their own land," the president tweeted Monday. "I said to my Generals, why should we be fighting for Syria [...] and Assad to protect the land of our enemy? Anyone who wants to assist Syria in protecting the Kurds is good with me, whether it is Russia, China, or Napoleon Bonaparte. I hope they all do great, we are 7,000 miles away!"

A “small footprint” of American forces will remain at a garrison in southern Syria to continue to disrupt remnants of ISIS, the president said in a statement. It wasn't clear when the roughly 1,000 U.S. troops in Syria would be pulled back.

Russian military forces on Monday went to patrol near the Syria-Turkey border, indicating that Moscow is looking to fill a security vacuum following U.S. troops' withdrawal from the region last week.

Trump said in his statement Monday that the U.S. would "aggressively use economic sanctions to target those who enable, facilitate and finance these heinous acts in Syria."

"I am fully prepared to swiftly destroy Turkey’s economy if Turkish leaders continue down this dangerous and destructive path," he said.

On Monday, European Union member countries vowed to suspend weapons exports to Turkey over its military operations in Syria. The move falls short of a formal arms embargo but halts arms export licenses to the Middle Eastern nation.

Fox News' Lucas Tomlinson, Lucia I. Suarez Sang and Louis Casiano contributed to this report, as well as The Associated Press.