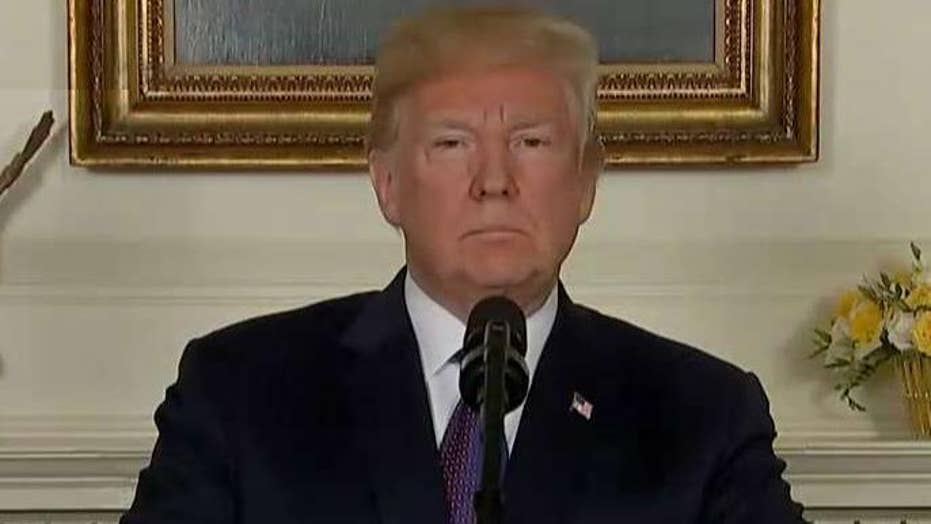 Lawmakers from both sides of the aisle reacted Friday night after President Donald Trump announced that U.S. military strikes would be carried out in Syria against the regime of Bashar al-Assad.

The news came after a suspected chemical attack by pro-regime forces last weekend in the rebel-held town of Douma. At least 40 people died in the attack and more than 500 people, mostly women and children, were hospitalized.

On Friday, Trump said Assad’s actions were not those “of a man” but rather “the crimes of a monster instead.”

Immediately following Trump’s address to the nation, loud explosions and thick smoke were reported in Damascus.

Here's what members of Congress and other officials had to say about the announcement:

Senate Majority Leader Mitch McConnell, R-Ky., said, “Tonight, the administration notified me of the president's decision to use military action to deter Bashar al-Assad and respond to the Syrian regime's use of chemical weapons against its own people. I support both the action and objective.

"The planning for this robust operation by the United States and our allies was clearly well-considered," McConnell continued. "It is evident that the President was provided with a number of options, and that our forces executed a challenging mission."

"The planning for this robust operation by the United States and our allies was clearly well-considered. It is evident that the President was provided with a number of options, and that our forces executed a challenging mission."

House Speaker Paul Ryan, R-Wis., released a statement saying, "Tonight, the United States has taken decisive action in coordination with our allies. We are united in our resolve that Assad's barbaric use of chemical weapons cannot go unanswered. His regime's unconscionable brutality against innocent civilians cannot be tolerated."

"There should be no doubt that Russia and Iran have blood on their hands, and their partnership with Assad reveals the true nature of their regimes," he continued. "The United States and our allies must continue to seek ways to hold Assad's enablers accountable. Let us all pay tribute to the men and women of our armed forces."

Senate Minority Leader Chuck Schumer, D-N.Y., stated, "A pinpointed, limited action to punish and hopefully deter Assad from doing this again is appropriate, but the administration has to be careful about not getting us into a greater and more involved war in Syria."

House Minority Leader Nancy Pelosi, D-Calif., tweeted a statement and added that the president "must come to Congress to obtain a new AUMF [Authorization for Use of Military Force], present a clear set of objectives, & ultimately hold Putin accountable for the bloodshed he has enabled."

U.S. Sen. Orrin Hatch, R-Utah, tweeted a statement saying, "The President's decision to retaliate with air strikes as part of a broader military response reflect his seriousness in addressing the scale and depravity of Assad's actions."

U.S. Sen. Bill Nelson, D-Fla., shared his support for the attack, saying "Assad musut be held accountable for the use of chemical weapons.

U.S. Sen. Bernie Sanders, I-Vt., said, "It is Congress, not the president, which has the constitutional responsibility for making war. The international community must uphold the prohibition against the use of chemical weapons, but it is unclear how Trump's illegal and unauthorized strikes on Syria achieve that goal."

U.S. Sen. David Perdue, R-Ga., issued a statement saying, “Chemical attacks against innocent children and civilians are horrific and totally unacceptable. Assad must know his inhumane actions will not be tolerated. I’ve met some of the Syrian families who fled Assad’s terror and are living in a refugee camp at the Turkish border. For too long, the world has been asking: when will Assad stop? It is time for action. President Trump is engaged and led our allies in measured response to hold Assad accountable."

House Majority Whip Steve Scalise, R-La., tweeted his strong support of Trump's decision to ally with the U.K. and France in response "to the Syrian regime's criminal use of chemical weapons against innocent men, women and children."

He added that the president was "right to assert that the Assad regime's evil acts cannot go unanswered."

U.S. Rep. Thomas Massie, R-Ky., tweeted, “I haven’t read France’s or Britain’s ‘Constitution,’ but I’ve read ours and no where in it is Presidential authority to strike Syria.”

U.S. Rep. Mac Thornberry, R-Texas, issued a statement, saying he supported "the President's decision to undertake this strike together with out allies."

"Tough questions about the future of our policy in Syria remain, but those questions should not detract from the justness of tonight's actions," he continued.