The world marked International Holocaust Remembrance Day on Saturday as elderly survivors gathered at the former Auschwitz death camp and political leaders warned that the Nazi genocide must continue to serve as a warning.

“On Holocaust Remembrance Day we mourn and grieve the murder of 6 million innocent Jewish men, women and children, and the millions of others who perished in the evil Nazi Genocide,” President Trump tweeted Saturday afternoon. “We pledge with all of our might and resolve: Never Again!”

On Friday Trump issued a statement in advance of the commemoration that said that "our nation is indebted to the Holocaust's survivors."

“Tomorrow marks the 73rd anniversary of the liberation of Auschwitz-Birkenau, the Nazi death and concentration camp in Nazi-occupied Poland,” Trump said. “We take this opportunity to recall the Nazis’ systematic persecution and brutal murder of six million Jewish people. In their death camps and under their inhuman rule, the Nazis also enslaved and killed millions of Slavs, Roma, gays, people with disabilities, priests and religious leaders, and others who courageously opposed their brutal regime.”

First lady Melania Trump visited the U.S. Holocaust Memorial Museum in Washington on Thursday after skipping the trip to Switzerland with her husband for the global economic summit in Davos.

The first lady later tweeted that the visit was "a powerful & moving tour that honors the millions of innocent lives lost, and educates us on the tragedies and effects of the holocaust."

"My thoughts and prayers are with the people whose lives and families were broken by the horrors of the Holocaust," she said in a statement. "My heart is with you, and we remember." 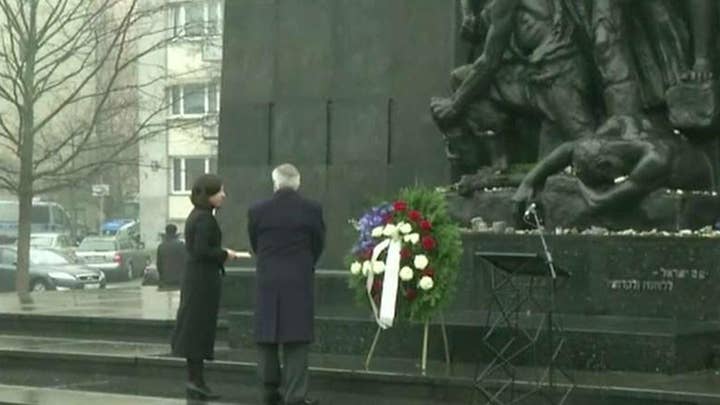 In Warsaw, Poland, U.S. Secretary of State Rex Tillerson paid his respects in a solemn ceremony Saturday at a memorial to the Jews who died revolting against German forces in the doomed Warsaw Ghetto Uprising of 1943.

Tillerson trailed two uniformed Polish military officers and readjusted a wreath underneath the monument, a hulking structure located in what was once the Warsaw Ghetto.

The head of Warsaw's Jewish community read a prayer and Tillerson made brief remarks about the importance of not forgetting the horrors of the Holocaust.

"The western alliance which emerged from World War II has committed itself to the assuring the security of all, that this would never happen again," he said. "As we mark this day in solemn remembrance, let us repeat the words of our own commitment: Never again. Never again."

His words came amid signs in Europe and beyond that ultra-nationalism and extreme right-wing groups are on the rise.

In Germany and Austria, the nations that perpetrated the killing of 6 million Jews and millions of others during World War II, far-right parties with their roots in the Nazi era are gaining strength. The anti-migrant, anti-Muslim AfD party won seats in the German parliament for the first time last year, while in Austria the nationalist, anti-migrant Freedom Party is in the government.

Both parties have had issues with members making anti-Semitic remarks.

Even Poland -- which was occupied and terrorized by Hitler's regime -- was convulsed this week by revelations of a fringe neo-Nazi group that honors Hitler. Other ultranationalist parties that espouse anti-Jewish and anti-Muslim views seem increasingly emboldened as well.

In Europe, that support is partially a backlash to the large influx of mostly Muslim migrants that peaked in 2015.

Some of those migrants, especially from Arab countries, have brought their own brand of anti-Semitism with them.

In Germany, many Jews have reported feeling threatened by anti-Semitism -- both from native far-right groups and from Arabs -- and Jewish institutions across the country have increased security.

Meanwhile, Muslim immigrants have been the target of German far-right attacks or threats.

She said schools, which already teach about the country's Nazi past, will need to work harder at that especially so immigrant students from Arab countries will not "exercise anti-Semitism."

She called it "incomprehensible and a disgrace that no Jewish institution can exist without police security --whether it is a school, a kindergarten or a synagogue."

Commemorations are set to take place on Saturday after dusk, after the end of the Jewish Sabbath, to mark the 73rd anniversary of the liberation of Auschwitz, located in southern Poland.