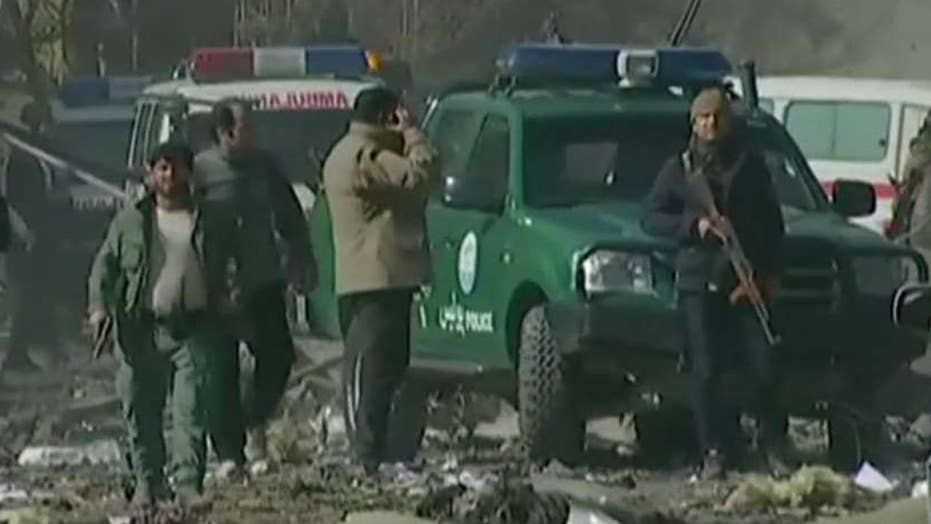 Ellison Barber has the latest details.

In comments released by the White House, Trump said: "This murderous attack renews our resolve and that of our Afghan partners."

"The Taliban's cruelty will not prevail," the statement continued. "The United States is committed to a secure Afghanistan that is free from terrorists who would target Americans, our allies, and anyone who does not share their wicked ideology. Now, all countries should take decisive action against the Taliban and the terrorist infrastructure that supports them."

Security forces inspect at the site of a deadly suicide attack in the center of Kabul, Afghanistan. (AP)

The bombing, which unfolded earlier in the day, was the deadliest insurgent attack in the country so far this year.

Wahid Majroh, a spokesman for the public health ministry, said that the toll might still rise, because reports from the hospital show many of the wounded appear to be in critical condition.

The attacker used an ambulance filled with explosives to pass through a security checkpoint, telling police he was transporting a patient to a nearby hospital, said Nasrat Rahimi, deputy spokesperson for the Interior Ministry.

The attacker then detonated the explosives at a second checkpoint.

Wounded people are assisted at the site of an explosion in downtown Kabul, Afghanistan. (AP)

"The majority of the dead in the attack are civilians, but of course we have military casualties as well," Rahimi said. He said four suspects had been arrested and were being questioned but he didn't elaborate.

The bombing sent thick black smoke into the sky from the site near the government’s former Interior Ministry building. Also nearby are the European Union and Indian consulates.

The powerful explosion was felt throughout the capital. At the scene, dozens of vehicles were damaged or destroyed. Several shops, including some selling antiques and photography equipment, were also destroyed.

Zabihullah Mujahid, a Taliban spokesperson, claimed responsibility for the bombing. It was the second successful Taliban attack in a week on various high security targets in the city.

"Cowardly Taliban targeted innocent Afghans & brave police in Kabul today," the tweet said. "We, along with our international partners, are there to stop terrorists from exporting their evil terror to the U.S. or our allies. Together with our Afghan partners, we will not allow the Taliban to win!"

"The Taliban's use of an ambulance as a weapon to target civilians represents inhumane disregard for the people of Afghanistan and all those working to bring peace to the country, and is a violation of the most basic international norms," Tillerson said in a statement. "We commend all the emergency services personnel for their courageous actions in responding to this terrorist attack."

Last Saturday, six Taliban militants attacked the Intercontinental Hotel, leaving 22 people dead, including 14 foreigners. Some 150 guests fled the gun battle and fire sparked by the assault by shimmying down bedsheets from the upper floors. The U.S. State Department said multiple American citizens were killed and injured in the attack.

Afghan security forces have struggled to fight the Taliban since the U.S. and NATO formally ended their combat mission in 2014.

President Donald Trump has pursued a plan that involves sending thousands more U.S. troops to Afghanistan and envisions shifting away from a "time-based" approach to one that more explicitly links U.S. assistance to concrete results from the Afghan government. Trump's U.N. envoy, Nikki Haley, said after a recent visit to Afghanistan that Trump's policy was working and that peace talks between the government and the Taliban are closer than ever before.

On Wednesday, ISIS militants stormed the offices of Save the Children in eastern Afghanistan killing four and triggering a standoff with police that lasted almost 10 hours. The Islamic State group was involved in at least 10 fatal attacks in Afghanistan last year.