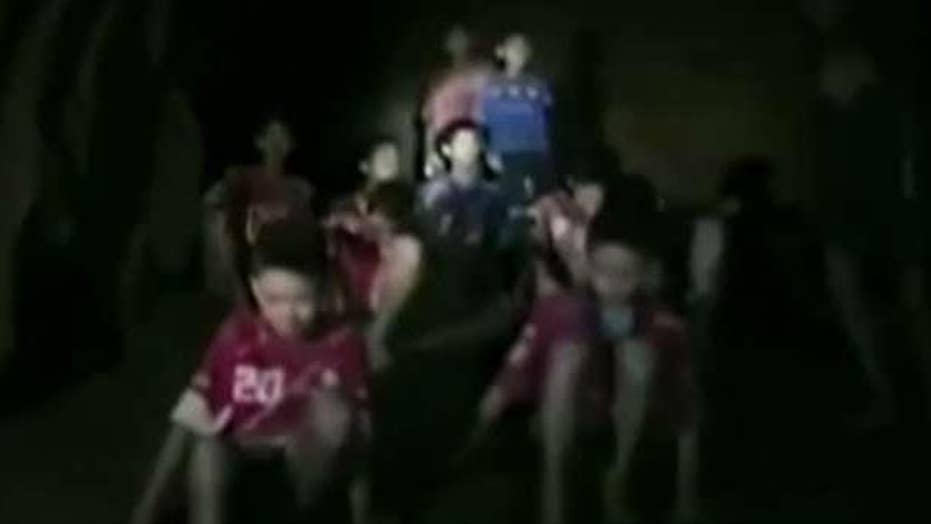 Thai officials say it could take months to get boys out of cave due to rainy season; reaction and analysis on 'The Five.'

A diver helping to rescue a group of boys who have been trapped in a cave in Thailand says the kids entered the complex as part of an "initiation."

The group of 12 boys entered the Tham Luang cave complex in Chiang Rai province on June 23 with their 25-year-old soccer coach, just after practice had ended. They became trapped after heavy rains flooded key passages.

A Dutch diver who was reportedly part of the group of rescue workers who found the boys told Sky News they were partaking in some sort of ritual.

The boys had left their backpacks and shoes outside the complex "before wading in and trying to go to the end of the tunnel," Ben Reymenants said. "Sort of like an initiation for local young boys to... write your name on the wall and make it back."

"Now a flash flood because of sudden heavy rain lock them in," the diver said, adding the young boys were strong but were weak in the caves from a lack of food.

Thai SEAL commander Rear Adm. Arpakorn Yookongkaew said Tuesday that seven members of his unit — including a doctor and a nurse — are now with the group of 13 people in the cave.

His team members "have given the boys food, starting from easily digested and high-powered food with enough minerals," he said at a news conferece.

The commander said having the trapped group dive out of the caves was one of several options being considered. If it were employed, he said they “have to be certain that it will work and have to have a drill to make that it’s 100 percent safe.”

THAI SOCCER TEAM RESCUE EFFORTS 'WILL TAKE TIME': A LOOK AT SOME OF THE OPTIONS

He said there was no rush to bring them out as they are safe where they are.

Teams, according to Thai English-language website Khaosodenglish.com, have been pumping roughly 2,600 gallons of water out of the complex every hour. Water in the cave is reportedly knee-deep, but is neck-deep in the chamber.