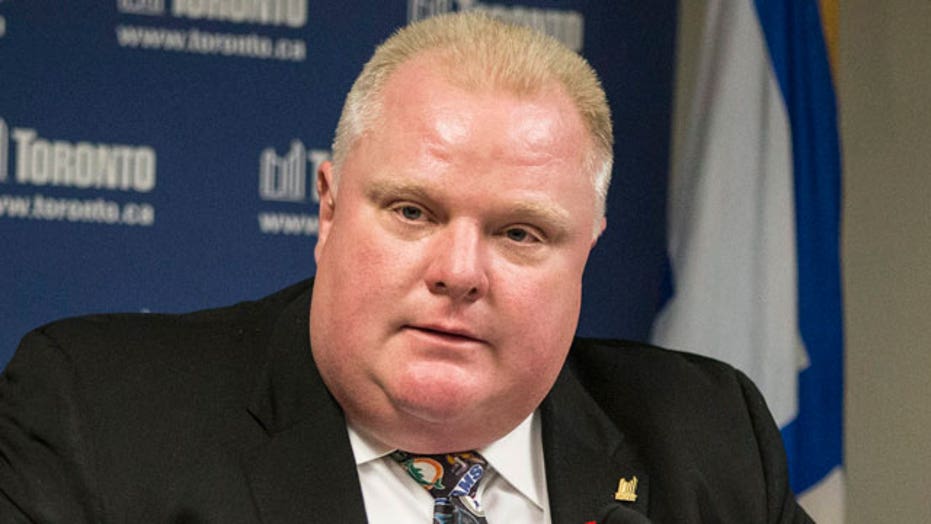 Does the embattled mayor of Canada's largest city need to step down?

Toronto Mayor Rob Ford has admitted to smoking crack, saying Tuesday that he did it “probably a year ago” during a “drunken stupor,” but says he loves his job and will continue as mayor.

“Yes, I have smoked crack cocaine,” Ford said in a scrum with reporters outside his city hall office, according to CBC. "No I’m not an addict and no, I do not do drugs. I made mistakes in the past and all I can do is apologize, but it is what it is and I can’t change the past.”

Despite his admission, Ford against insisted he would not resign. Ford said Tuesday he will continue in his job and will seek re-election next year.

Municipal law makes no provision for the mayor's forced removal from office unless he's convicted and jailed for a criminal offense.

City Councilor Denzil Minnan-Wong, a member of Ford's executive committee, said he would put forward a motion asking Ford to take a leave of absence.

Councilor Jaye Robinson said the mayor needs to step aside and address his problems.

"We have become a laughing stock of North America, if not the world," Robinson said.

The admission came after Ford dodged a direct question on the issue a day earlier during a radio talk show appearance about whether he has ever used crack cocaine. On Sunday, Ford apologized for "a lot of stupid things" and acknowledged the need to curb his drinking.

When asked by the host of The John Oakley Show if he has ever used crack Monday, Ford responded by saying only that he was not a drug addict or an alcoholic.

Ford continued to insist that he doesn't have an addiction when he was asked if he would be able to recognize the signs of addiction.

"If I am an addict I could not show up to work every single day and you know I cannot miss work," he said.

The populist, conservative mayor was interviewed on the show addressing a media storm that broke after police revealed last week that they had obtained a copy of a video that appears to show the mayor puffing on a crack cocaine pipe.

The video was recovered from a computer hard drive during an investigation of Alexander Lisi, an associate of Ford's who is suspected of providing him with drugs. Police have said they don't have grounds to charge the mayor with any crime.

Ford didn't address the contents of the video Sunday, saying he cannot comment on a tape he hasn't seen. He pleaded with police to release the video to the public. However, police have said they cannot release the video because it is evidence in the Lisi case.

Police said the video will come out when Lisi goes to trial on drug and extortion charges. Lisi is accused of threatening two alleged gang members who had been trying to sell the video to the media.

Earlier Tuesday, Ford's brother, Doug, criticized Police Chief Bill Blair for saying he was "disappointed" in the mayor after watching the video. Doug Ford called the chief's comments "inappropriate" and "biased" and said Blair should step aside.

"We have the most political police chief we have ever seen," said Doug Ford, a Toronto City Councillor. "The police chief believes he's the judge, the jury and the executioner."

Blair says he responded honestly when asked about his feelings after watching the video.

Police have said they want to talk to Ford, but his lawyer so far has declined.

Ford on Sunday acknowledged making "mistakes," saying he was referring to being inebriated in public and texting while driving. He did not say much about the contents of the alleged video.

He said that while he's not going to curb his drinking altogether, he'll slow down on "the eating and drinking and everything."

Councilor Sarah Docuette said Monday that she doesn't think many councilors feel like his apology is enough.

"I don't think it (the apology) was adequate," said Councilor Gloria Lindsay Luby. "It didn't address what most people were very concerned about, which were the drug allegations."

Toronto's deputy mayor Norm Kelly said Monday that while Ford's public apology "may not be the one that everyone had anticipated," it was enough.

"I think that apology and the acknowledgment together, and a commitment to change his behavior is a good first step," Kelly said. "I'll hold him to his commitment, and hopefully time will prove that he's made the right decision."

All four major Toronto newspapers have called on Ford to resign.

Ford, 44, whose term ends in Oct. 2014, vowed Sunday to run for re-election and the crack smoking allegations do not seem to have hurt him with his base in the Toronto suburbs.

According to a Forum Research poll conducted on Nov. 1 — a day after the police announcement — the mayor's approval rating rose to 44 percent from 39 percent, with 98 percent of respondents saying they were aware of the news of the recovered video.