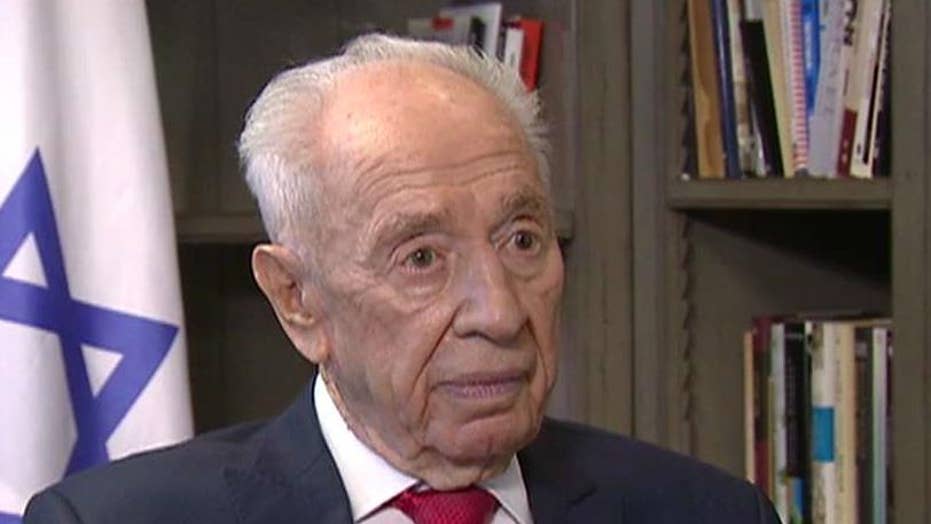 Erics Interview with the Israeli leader

That life advice came from Shimon Peres as I sat with him in his Tel Aviv apartment for a Fox News interview just two months ago.

The former Israeli Prime Minister and President who was a founding father of the Jewish state died at age 93 Tuesday night, but as we met this summer he was full of life, optimistic, insightful, and wise. I felt as if I was sitting with a loving and kind grandfather who just happened to be one of the founding fathers of his nation and an iconic world statesman, as he shared his views in a very personal way about what he had learned over decades.

I was in Israel to shoot interviews focusing on the anniversary of the raid on Entebbe and Israel's experience fighting terrorism. I had interviewed Israeli Prime Minister Benjamin Netanyahu the day before, and I was scheduled to sit down with Former Prime Minister Ehud Barak later on the day I met Peres.

In a nearly one-hour interview, Peres not only expounded on the legacy of his nation, but philosophically spoke about the human spirit.

"People ask me, how can you go on? I say, 'I have to make one suggestion to you. Make a count of how many achievements you did in your life. Then make a second account, how many dreams do you have in your brain? If the number of dreams exceeds the number of achievements, you are young. If not, you're finished!’"

He recalled the creation of Israel in 1948.

"We were outgunned, out-manned, no friends," he observed. "We didn't have any natural resources, no oil nor gold. Then we were 650,000 people, the Arabs 50 million, and they decided to destroy us. They had an army, we didn't. We had nothing and nothing, neither people nor strength. No money, no friends, but we discovered something else, and that was the real natural resource is the human being. People don't realize that what a man has inside him, exceeds the land, it exceeds the water, and exceeds anything. Israel discovered that out of choice, that we can hang only on the talents, devotion, and courage of the human being. We made agriculture without land and without water."

He said that the map of Israel "exists in lengths, but doesn't have any waist. For a lady, it may be perfect. For a strategy, it is a catastrophe!"

He was also confident that the West will defeat terrorism.

"Don't underrate the danger of terrorists," he cautioned. "But don't take them as holy heroes. They are not. Their weakness is, that they are quite confused. And don't exaggerate with fear. You have to fear, but don't make fear the leading consideration because they have weaknesses and our voice have a strength of their own."

I cited the recent attacks in Orlando, the Boston bombings and 9/11. Peres said the conflict was different from the wars his nation has fought.

"We have a new world, let's not forget it. That's one of our problems," he said. "You have the old world, which is based on territory. You wanted more territory? War. You want to defend your borders? War."

But now, he said, terrorism can strike anywhere.

"Heal the reasons for terror. You have to fight terror, because you have to ask, what are the motives of terrorists?" he asked. "Partly it can be insult from the crusaders. They say 'you have insulted us, you brought us down, you put on us shame. Now we shall cut your heads."

"But there are other reasons, too. Poverty, ignorance, illness, lack of hope, lack of a future. This you can correct, because there are 400 million Arabs here in the region, and 60 percent of them are below the age of 25 or 20. For me, they are our natural partners and 70,000 or 60,000 of them belong to the terrorists. But hundreds of thousands of them go to universities, a different world. And the problem is when they graduate, they cannot find a job, because there is not enough high-tech centers in those countries.

"So I think we have to do what we are doing ... encourage the students to become entrepreneurs. I say, 'as we fight terrorists, we have to encourage students ... we have to fight the reasons for terror."

He was optimistic, saying that "I think the younger generation will stop it more than anybody else."

After our interview was finished, we sat in his living room to chat.

He also did something that was so life-affirming and charming, that I will cherish the experience always.

The former Prime Minister brought out a bottle of chilled white wine from the Golan Heights, and, along with my producer Jonathan Wachtel, we toasted life.

As we left, thanking him for his time and for an unforgettable experience, this remarkable man and inspirational figure bid us goodbye.

Johnathan Wachtel contributed to this report.