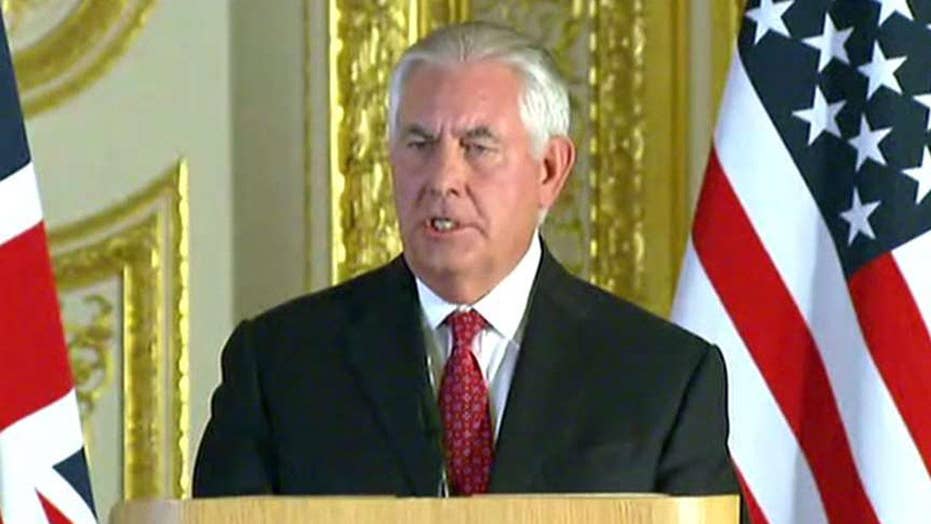 Secretary of state says he'd like to see China cut shipments of oil to North Korea; Rich Edson reports from the State Department

LONDON – U.S. Secretary of State Rex Tillerson on Thursday urged China to use its leverage as North Korea's principal supplier of oil to press the isolated nation into reconsidering its development of nuclear weapons.

The Trump administration sought an embargo on oil imports to North Korea at the U.N. Security Council this week in response to the North's most powerful nuclear test to date. But opposition from China and Russia forced the U.N. to approve weaker measures, although it did ban textile exports, an important source of its revenue for the North.

Tillerson said it was going to be "very difficult" to get China to consent to an embargo against its neighbor, but he still urged China as a "great country and a world power" to use its leverage as the supplier of virtually all North Korea's oil.

"That is a very powerful tool and it has been used in the past," Tillerson said at a news conference. "We hope China will not reject that."

He spoke after talks with Britain and France on how to increase pressure on the authoritarian government of Kim Jong Un as it moves closer to having a nuclear-tipped missile that could threaten the American mainland.

China opposes North Korea's nuclear weapons development but worries that greater economic pressure on the North could trigger a collapse. It wants the U.S. to restart long-stalled negotiations with North Korea.

The U.S., Britain and France are the other permanent members of the Security Council, the U.N.'s most powerful decision-making body. Diplomats from the three nations were meeting in London on Thursday to discuss issues that included the response to Hurricane Irma, which has caused havoc in the southeastern United States and the Caribbean.

Later, they were joined by representatives from the U.N., Italy, Egypt and the United Arab Emirates for discussions about the upheaval in Libya and a U.N.-backed mediation effort to stabilize the North African nation.

Libya fell into chaos following the 2011 NATO-backed uprising that toppled Moammar Gadhafi. Today it is split between rival parliaments and governments in the east and west, each backed by a set of militias, tribes and political factions.

Speaking to U.S. Embassy staff before the talks, Tillerson said the aim was to "knot their peace process together" and "put Libya back together."

British Foreign Secretary Boris Johnson, who visited Libya last month, said peace in Libya is "wholly achievable" and elections could be held next year, but a constitution needs to be put in place first.

Tillerson voiced U.S. support for the U.N. mediation effort. He said the U.S. does not want to see Libya become a safe haven for additional terrorist organizations including the Islamic State group.

Tillerson also met with British Prime Minister Theresa May and discussed the threat posed to the Mideast region by Iran.