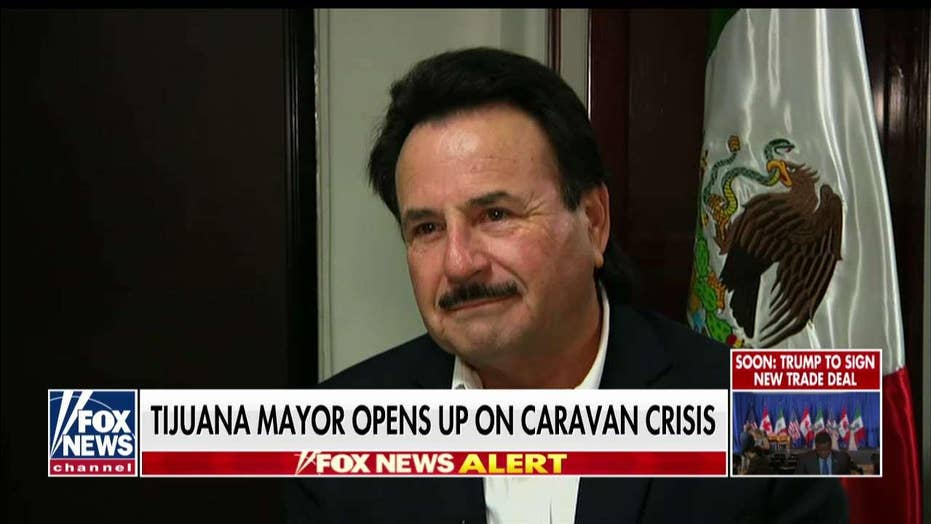 'It's a Federal Crime': Tijuana Mayor Says Caravan Organizers Should Be Arrested

TIJUANA, Mexico – After declaring the migrant caravan a “humanitarian crisis” this week, Mayor Juan Manuel Gastélum told Fox News that he can no longer continue to fund the municipal effort to shelter them without federal assistance.

“I’m not going to break public services to solve this problem,” the Tijuana mayor said.

Even worse, he could be forced to raise taxes on Tijuana’s 1.7 million residents who have already suffered from Sunday’s clashes.

“In those six hours that the border was closed, we lost approximately 129 million pesos,” he said. “That's not fair. How do you think people from Tijuana feel towards those people who are making problems?”

Authorities in the Mexican city of Tijuana have begun moving some of more than 6,000 Central American migrants from an overcrowded shelter on the border to an events hall further away. (AP Photo/Rebecca Blackwell)

Efforts were underway to move some of them to a new location because of reports that more migrants were making their way to Tijuana.

Mayor Gastélum blames the organizers for whom he cannot identify. He said they should be held accountable. He said the leaders of the caravan should face criminal charges.

“Those are the real criminals because they're dealing with the lives of people,” he says.

Authorities hold a Honduran migrant who was rescued after he tried to cross the US border by the sea in Tijuana beach, Mexico, Thursday, Nov. 29, 2018. (AP Photo/Ramon Espinosa)

Gastélum has a message for the incoming president.

“It's problem he must solve," he said, "as soon as he gets into office.”