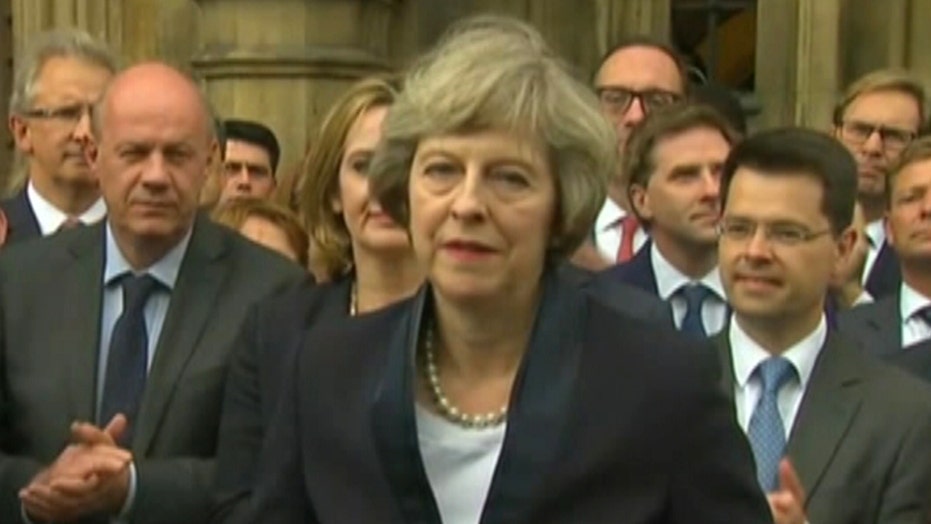 Theresa May said Monday she was "honored and humbled" to be chosen as Britain's next prime minister, after the Conservative Party confirmed she would take over from David Cameron this week.

May, 59, greeted a crowd of party officials and supporters in London before giving a short statement, saying, "Together we will build a better Britain." She will be only the second woman to hold the powerful position, after Margaret Thatcher.

May, who has served as Britain's home secretary for six years, became the country's leader-in-waiting after her sole remaining rival, Energy Minister Andrea Leadsom, unexpectedly withdrew earlier Monday. Cameron has said he will step down on Wednesday and May will immediately replace him.

May said she would do her best to lead Britain as it exited the European Union, signaling that she would not try to stop it. "Brexit means Brexit and we are going to make a success of it."

Graham Brady, who heads the committee running the leadership election, said May was confirmed by the party board.

Standing outside 10 Downing St. Cameron said: "We will have a new prime minister in that building behind me by Wednesday evening."

Cameron announced his resignation after failing to convince voters to remain in the EU in a June 23 referendum. May had campaigned tepidly for Britain to remain but on Monday sought to reassure those who voted "leave" that she would respect their wishes.

Leadsom, a "leave" supporter, said Britain needed stability amid the uncertainty caused by its vote to leave the European Union. She stepped down from the Conservative leadership race earlier Monday after a weekend furor over comments in which she appeared to say being a mother gave her an advantage over May, who has no children.

Her withdrawal -- only a week after she announced she was running -- took the country by surprise. May was 120 miles away in Birmingham formally launching her leadership campaign when Leadsom spoke outside her London campaign office.

In a brief statement, Leadsom said she had concluded she lacked "sufficient support" among legislators to be leader. She said "the interests of our country are best served by the immediate appointment of a strong and well-supported prime minister."

It is the latest spin of the political whirlwind unleashed by Britain's vote to leave the EU. Cameron's resignation announcement the next day triggered the Tory leadership race. The most prominent contenders to replace him -- including "leave" campaign leaders Boris Johnson and Michael Gove -- fell one by one amid allegations of treachery and scheming.

Conservative lawmakers narrowed the field from five contenders to two, Leadsom and May. Some 150,000 party members were due to choose between them in the coming weeks, and the result would have been announced in September.

Now, May will be invited to form a government by the queen on Wednesday. The monarch's role is ceremonial, but part of the custom of changes of government.

May is one of the most experienced ministers in Cameron's Cabinet, serving in the notoriously difficult job of home secretary, akin to the interior minister's post in other countries, for six years.

Like Cameron, she comes from the pro-EU wing of the party, but leading anti-EU Conservatives quickly rallied around her Monday. Gove, the justice secretary, said "she has my full support as our next prime minister," while former London mayor Johnson said May would "provide the authority and the leadership necessary to unite the Conservative Party and take the country forward."

Leadsom's decision to quit came after the weekend uproar over her comments about the role of motherhood in politics. She at first defended, then apologized for, an interview in which she said that being a mother "means you have a very real stake in the future of our country."

Before her announcement, Leadsom apologized to May, telling Monday's Daily Telegraph newspaper that she believed that having children has "no bearing on the ability to be PM."

Leadsom's rivals said both her comments on motherhood and her subsequent flip-flopping showed the junior energy minister lacked the experience under pressure required to be prime minister. Her allies accused May supporters of attempting to undermine Leadsom.

The Conservatives aren't the only ones thrown into turmoil by the referendum, which has also sparked a leadership struggle in the main opposition Labor party.

Labor lawmaker Angela Eagle on Monday launched an attempt to unseat party leader Jeremy Corbyn, a veteran left-winger who has a strong base of support among Labor members but little backing from the party's 229 lawmakers.

Labor legislators have passed a no-confidence motion in Corbyn, and many of his top team in Parliament resigned from their jobs to protest his leadership. He is refusing to resign and says he can win a leadership battle, which would be decided by a vote of party members.

May's accession is unlikely to end Britain's political turbulence. She will be under immediate pressure to launch formal exit talks with the EU by triggering Article 50 of the bloc's constitution.

She also faces calls to seek a mandate from voters well before the next scheduled national election in 2020, although there is no legal requirement for her to do so. The opposition Labor and Liberal Democrat parties both urged her Tuesday to call a quick poll.

"It is simply inconceivable that Theresa May should be crowned prime minister without even having won an election in her own party, let alone the country," said Liberal Democrat leader Tim Farron.

Oliver Daddow, senior lecturer in politics at Nottingham Trent University, said May would be well advised to call a snap election while Labor was in disarray.

"What's in her favor is that Labor are in such a mess," he said. "She'd have to really mess it up not to win."