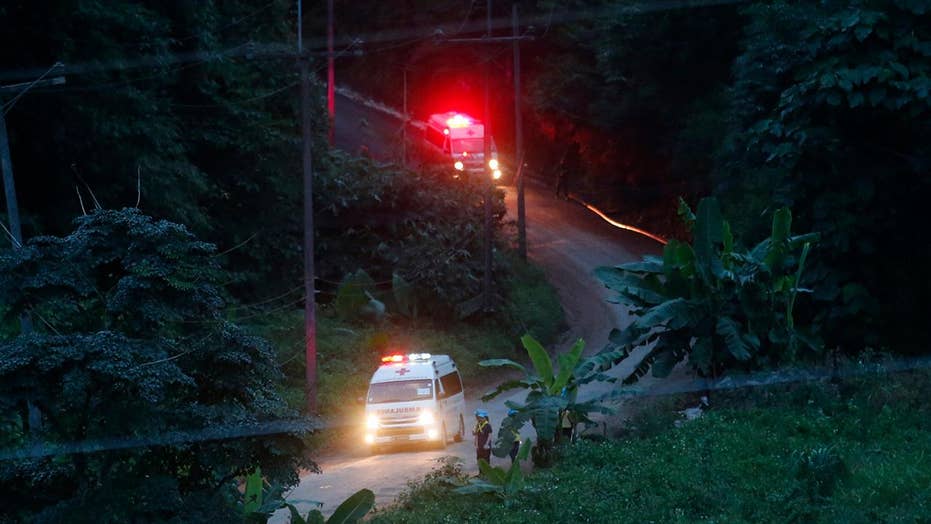 Rescuers free eight members of the youth soccer team who were trapped in a cave complex; Jeff Paul reports from Chiang Rai, Thailand.

Rescuers in Thailand on Monday freed four more members of the boys soccer team stranded in a flooded cave complex, as part of the second phase of a desperate rescue operation that aims to save four more kids and the team's coach before heavy rains imperil the effort.

Four ambulances with flashing lights were spotted leaving the area as Thai navy SEALs said on Facebook that four boys were brought out of the cave on Monday, bringing the total to eight rescued so far before rescue operations were suspended for the day.

Chiang Rai acting Gov. Narongsak Osatanakorn said at a news conference the rescue mission on Monday took only 9 hours compared to the 11 hours the previous day, adding that rescue crews are more familiar with the mission and additional help was present. A Thai army deputy commander added that the operation went "smoothly" but warned the next phase "will depend on all conditions," according to Sky News.

In this image made from video taken Sunday, July 8, 2018, an emergency team carries a stretcher carrying one of the rescued boys from the flooded cave to a waiting helicopter in Mae Sai, Chiang Mai province, northern Thailand. (Big Krean via AP)

Narongsak said that rescuers, which included 18 divers and 100 personnel, may need to adjust their operation if they choose to bring out the remaining five people on Tuesday, and that it may take multiple steps.

Thai officials stressed they are hoping the rescue operation will be wrapped up by Tuesday, and that the four who were first pulled out of the cave on Sunday are eating solid food now and in "good condition."

The newest set of rescues came about six hours after Chiang Rai acting Gov. Narongsak Osatanakorn said the second phase was underway. One helicopter carried the sixth and seventh boys to be rescued to a hospital, while the eighth boy was being transported on another helicopter for medical treatment.

Divers have been taking the boys through dark, tight and twisting passageways filled with muddy water and strong currents. (Thai Navy SEAL)

"All conditions are still as good as they were yesterday," Narongsak told a news conference. "The boys' strength, the plan — today we are ready like before. And we will do it faster because we are afraid of the rain."

On Sunday, Thai navy SEALs successfully retrieved the first four members of the youth soccer team from the cave where they had been trapped for more than two weeks in the first rescue operation.

Interior Minister Anupong Paojinda said early Monday the same group of expert divers who took part in Sunday's rescue returned to extricate the others because they know the cave conditions and what to do. He said fresh air tanks needed to be laid along the underwater route, as officials continue to pump water out of the cave.

Eighteen divers entered the cave to rescue the 12 boys and their soccer coach on Sunday. (Thai Navy SEAL)

Reuters, citing an unnamed source at a nearby hospital, reported the boys’ conditions were “not bad” but will continue to be monitored.

"This morning they said they were hungry and wanted to eat khao pad grapao," Narongsak said, according to the Associated Press, referring to a Thai dish of meat fried with chili and basil and served over rice.

The divers began the operation at 11 a.m. Monday local time to bring the remaining boys and their 25-year-old coach out of the Tham Luang Nang Non cave in Chiang Rai province.

It was not immediately clear Monday how the overnight rains had impacted water levels inside the flooded cave. Officials have said storms forecast for Chiang Rai province in Thailand's far north had factored into their decision to go ahead with a complicated and dangerous plan to have the boys and their coach dive out of the cave. If everything goes to according to plan, the operation should be completed on Tuesday, officials previously told The Wall Street Journal.

Narongsak previously said experts told him flooding from new rain could shrink the unflooded space where the boys are sheltering to just 108 square feet.

"I confirm that we are at war with water and time from the first day up to today," he said. "Finding the boys doesn't mean we've finished our mission. It is only a small battle we've won, but the war has not ended. The war ends when we win all three battles — the battles to search, rescue and send them home."

The death Friday of a former Thai navy SEAL underscored the risks. The diver, the first fatality of the rescue effort, was working in a volunteer capacity and died on a mission to place air canisters along the passage to where the boys are, a necessary task in order for divers to safely travel the five- to six-hour route.

Trips from the entrance to where the team is trapped and back to the entrance take about 11 hours and include walking, wading, climbing and diving, the BBC reported. There is reportedly a guide rope in place. Two divers will accompany each boy as they are gradually extracted.

An international team of expert divers—90 in all, 40 from Thailand and 50 from overseas—have been working in the area.

About 40 U.S. Air Force special operations personnel -- including an 18-person personnel recovery team -- were on the ground in Thailand at two locations, a U.S. defense official told Fox News.

The stranded boys, members of the Wild Boars soccer team, have been invited to the World Cup Final in Moscow if they make it out in time and can physically handle the trip.