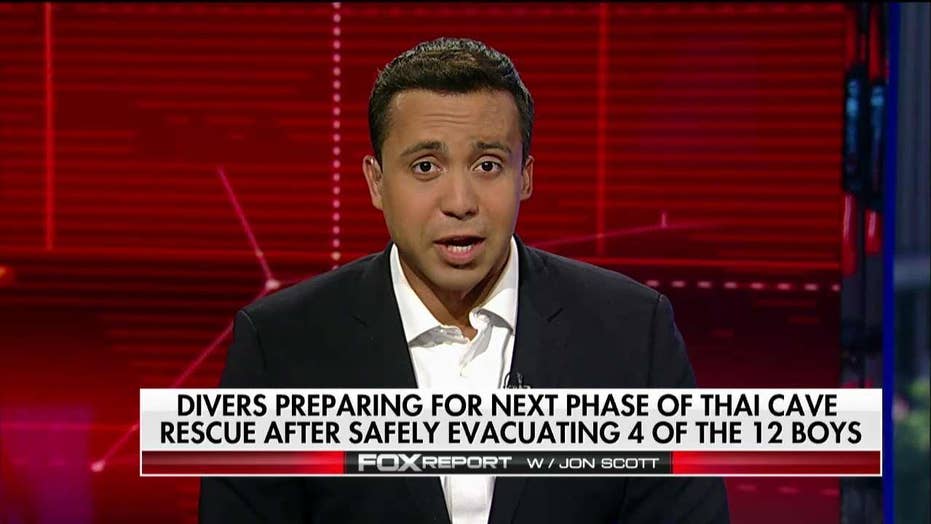 Divers prepare for next phase of Thai cave rescue

Divers are preparing for the next phase of Thai cave rescue after safely evacuating 4 of the 12 boys; Bryan Llenas has more.

Efforts to rescue eight boys and their soccer coach from a flooded cave in Thailand could take hours longer to resume than initially anticipated as rescuers replenish their air tanks.

Authorities temporarily halted their efforts Monday morning to put the new tanks in place along the cave's exit route. A previous rescue mission, which saw four boys removed from the cave, had used up the initial supply of tanks.

Rescuers arrive near the cave where 12 boys and their soccer coach have been trapped since June 23, in Mae Sai, Chiang Rai province, in northern Thailand Sunday, July 8, 2018. (AP Photo/Sakchai Lalit)

According to estimates, phase two of the rescue operation would not begin before 8 p.m. or 9 p.m. local time Monday (9 a.m. or 10 a.m. ET). Officials initially estimated the second phase of the mission would begin 10 to 12 hours after the first — roughly 7 a.m. local time Monday.

Officials told The Associated Press that it could take up to four days to complete the rescue.

After the four boys were removed from the cave Sunday evening, heavy rain started falling.

Authorities have said the monsoons could cause water to rise in the cave. That along with dwindling oxygen levels, added to the urgency of getting the team out. Earlier efforts to pump water out of the cave have been set back by heavy downpours.

The children were transported to the hospital — one by ambulance and three by helicopter — once they were able to leave the cave.

The boys' names nor their conditions were released, but the head of the joint command center coordinating the search said he met with the children and described them as being in "perfect" health and called today's mission the "best situation."

Officials had estimated the first phase of the rescue mission would take 12 hours, giving the divers six hours into the cave and back. However, Sunday's mission took 7 hours and 40 minutes.

Authorities temporarily halted their efforts Monday morning to put the new tanks in place along the cave's exit route.

A group of 18 divers — 13 foreign and five Thai — began the operation to remove the boys from the cave Sunday. Narongsak had called the mission "a D-Day for our operation."

"I confirm that we are at war with water and time from the first day up to today," Narongsak added. "Finding the boys doesn't mean we've finished our mission. It is only a small battle we've won, but the war has not ended. The war ends when we win all three battles — the battles to search, rescue and send them home."

The boys and their coach, whose team is known as the Wild Boars, became stranded when they were exploring the cave after a practice game on June 23.

Monsoon flooding cut off their escape route and prevented rescuers from finding them for almost 10 days.

The ordeal has riveted Thailand and captured the world's attention. The search and rescue operation has involved dozens of international experts and rescuers, including a U.S. military team.

Elon Musk's Space X rocket company plans to send a "tiny kid-sized submarine" in case it's needed. A spokesman for Musk's Boring Co. tunneling unit, which has four engineers at the cave, said in an email Sunday that Thai officials had requested the device and that divers have determined it could potentially help the children through narrow, flooded cave passageways.

Musk said on Twitter the aluminum sub would be tested until Sunday midafternoon California time before being placed on a 17-hour flight to Thailand. He posted a video of a diver testing the device in a pool.

President Donald Trump tweeted Sunday: "The U.S. is working very closely with the Government of Thailand to help get all of the children out of the cave and to safety. Very brave and talented people!"

Fox News' Jeff Paul and Katherine Lam and The Associated Press contributed to this report.