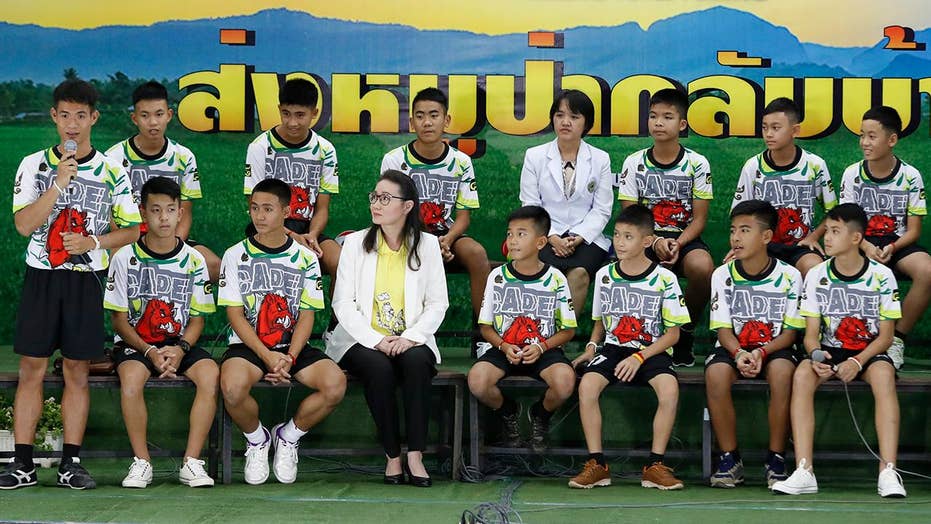 Players give press conference on days spent in cave; Benjamin Hall reports on what the boys had to say.

The members of a Thai youth soccer team whose gripping rescue from a flooded cavern captivated the globe left a hospital Wednesday and shared details of their harrowing two-week ordeal for the first time.

The news conference, held in a government building in the northern city of Chiang Rai, was the first opportunity the 12 boys and their 25-year-old coach had to speak directly to the media, though video of the group was released previously. Officials pre-screened questions to weed out any they felt may be psychologically damaging.

A conference hall prepared for the interview was decorated to look like a soccer field, and the event started with a tribute to diver and former Navy SEAL Saman Kunan, who was the lone death to occur during the rescue effort.

On entering the interview room, one of the boys could be heard saying, “everyone was worried about us and I’m speechless," according to Sky News.

Members of the rescued soccer team and their coach sit during a press conference discussing their ordeal in the cave in Chiang Rai, northern Thailand, Wednesday, July 18, 2018 (AP Photo/Vincent Thian)

Another boy said his "heart burst" when the first diver popped up, and a teammate told reporters he was "shocked" when one of the divers turned out to be British.

The Wild Boars team members, most of whom were not identified during Wednesday's interview, left soccer practice with their coach and entered the Tham Luang cave June 23 -- just before heavy rains flooded the caverns and cut off their way out.

Coach" Ake" Ekkapol Janthawong, left, speaks on behalf of the 12 boys and himself and their cave rescue during a press conference discussing their ordeal. (AP Photo/Vincent Thian)

The team's coach, "Ake" Ekkapol Janthawong, said he was the only member of the group who had previously been to the cave.

"The cave was deep and it was long," he told reporters. "We saw the water but it wasn't deep."

Ekkapol said he asked the boys if they wanted to explore, and told them they would have to swim. The team said they could all swim, and decided to go in. Ekkapol later told reporters he will "think twice" before he does anything similar in the future.

One of the boys said he was afraid during the ordeal he would be "scolded" by his mother after she found out the team was trapped.

Coach Ekkapol Janthawong, left, and members of the rescued soccer team express their thanks during a press conference discussing their experience of being trapped in a flooded cave. (AP)

The boys said they took turns digging a cave wall, alternating shifts to find clear drinking water after they felt water coming from the walls inside the cavern.

After a 10 day search, divers found the group huddling on a spot of dry ground deep inside the cave. An international team of rescuers using diving equipment and pulleys were then able to extract the 12 boys and coach through a lengthy process that included traversing tight, flooded passageways. It took three days to get everyone to safety.

One of the boys hailed a rescuer as being "like a father."

Divers involved in the rescue recently revealed each of the children were sedated to stop them from panicking during the rescue. The move was controversial enough that the Australian Government negotiated immunity from Thai authorities for any Australians involved in the sedation of the children in case anything went wrong, according to News.com.au.

Though one of the boys said during the news conference, “I was really afraid I would not be able to return home," the team said their coach was an inspirational leader, telling them to fight fear and not give in.

The Wild Boars and their coach had been pronounced generally healthy by doctors, aside from minor infections. One doctor who treated the boys said each gained about six pounds of weight since their rescue.

A mini soccer field being set up before a press conference on the 12 boys and coach released from the hospital in Chiang Rai province, northern Thailand, Wednesday, July 18, 2018 (AP Photo/Vincent Thian)

"They are physically and emotionally well," she said.

Several of the boys took the opportunity of the interview to apologize to their parents, saying they were sorry they did not inform them they were going into the cave.

"I want to apologize to my mother," one boy said. "I didn't tell her the truth as I said I was only going to [soccer practice]."

Another player feared his parents were searching the wrong cavern for him, because he accidentally told them he was going to a different cave.

"I like to say sorry to my parents, 'cause I told them the wrong cave...they were probably searching every cave for me," he said.

The family of one boy was preparing for his return Wednesday night. Banphot Konkum, an uncle who has raised 13-year-old Duangpetch Promthep, told the Associated Press he'll have a renovated bedroom and gifts awaiting him.