Coach Ekapol Chantawong trained with Buddhist monks for a decade after his family was killed by a disease. Friends say Ekapol, who became trapped in the Thailand cave along with 12 young members of the soccer team in June, “loves the boys more than he loves himself.” (AP Photo/Sakchai Lalit)

The 25-year-old soccer coach who led his youth team into a Thai cave complex where the group was stuck for more than two weeks is a former Buddhist monk who's cheated death at least once before.

Ekapol Chantawong, affectionately known as “Ake,” was trapped with the team of 12 boys — ranging 11 to 16 years of age — in northern Thailand’s Tham Luang Nang Non cave since June 23, when they went exploring after a practice game. The team was stuck without food for more than a week until rescuers discovered them alive.

Following a three-day harrowing rescue mission, all of the boys and the coach were rescued from the cave by July 10.

Ekapol had already cheated death; when he was just 10 years old, his parents and brother were killed by a disease that ravaged his village, only sparing him, The Australian reported.

He lived with extended family members for a short time after his family’s deaths, but he was “sad and lonely” so he was sent to a Buddhist temple for training to be a monk, his aunt, Umporn Sriwichai, told The Australian. 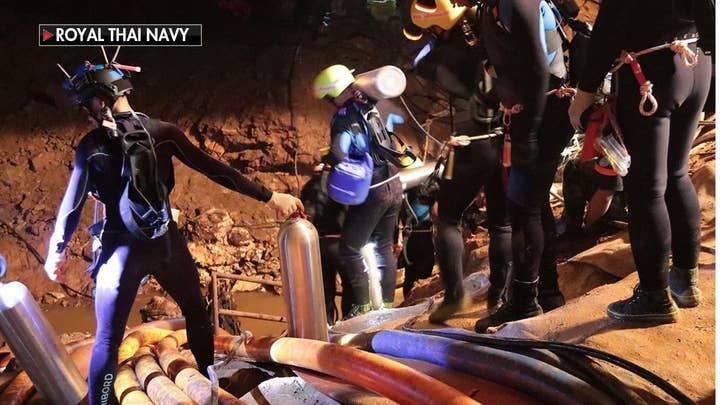 He spent 10 years at the temple and still occasionally visits to meditate, family members said. It’s that training that could have helped him keep the team alive as they remained trapped in the cave.

“He could meditate up to an hour,” Tham Chanthawong, another aunt, told The Associated Press. “It’s definitely helped him and probably helps the boys to stay calm.”

Police had said they were going to look into potential charges against Ekapol, but parents have credited the coach with keeping their children safe in the cave.

The Wild Boors senior coach said Ekapol “loves the boys more than he loves himself.”

Last week, the team was able to write letters to their loved ones, and Ekapol apologized to families of the children in his care.

“I promise I will care for the kids as best as possible. I want to say thanks for all the support and I want to apologize to the parents,” he wrote.

The team had to travel, with experienced divers, nearly three miles to exit the cave.

“Coach Ake is very dedicated to the team,” said Noppadon Kanthawong, whose 13-year-old son plays on the Wild Boars but decided to skip the cave trip. “He would be there at the field waiting for kids to show up after school. It is a great way to keep healthy, away from screens and have friends. I can tell that they are very close to each other.”

“When he comes out, we have to heal his heart,” Pornchai Kamluang, mother of one of the trapped boys, said, adding, “I would never blame [the coach]."

A close friend of some of the players praised Ekapol as the “real hero” throughout the ordeal.

“I love Ake, he’s the one I trust, he’s the one who takes care of all the kids,” friend Auttaporn Khamheng told local media. “To survive, they are all heroes, but the biggest hero is the coach. I’m sure he has done everything for all the kids in the cave.”

“When he comes out, we have to heal his heart. I would never blame you.”

— Pornchai Kamluang, mother of one of the trapped boys.

Ekapol had recently been given more responsibility with the team. He was the one with the team on June 23 because head coach Nopparat Kathawong reportedly had an appointment.

The members of the Wild Boars are a team on and off the soccer field, traveling to competitions, cycling mountain roads and swimming in waterfalls together.

Officials said it wasn't the first time some of the soccer players had been inside the cave.

"The kids have been in the cave before, but they didn't think that going in at this time would be that dangerous," Chote Narin, an officer at Mae Sai district police station, told The Associated Press.

Coach Ekapol's Facebook page is packed with photos and video of him and what appear to be members of his team practicing, cycling the area's mountain roads and inner tubing on a river.

A post from December 2016 reads, “Special training before the competition. Tham Luang Nang Non.” Attached are 10 photos from inside the cave of boys in soccer uniforms smiling and posing for photos, lit by the beam of a flashlight.

The conditions of those rescued Tuesday, including that of the coach, have not been revealed.