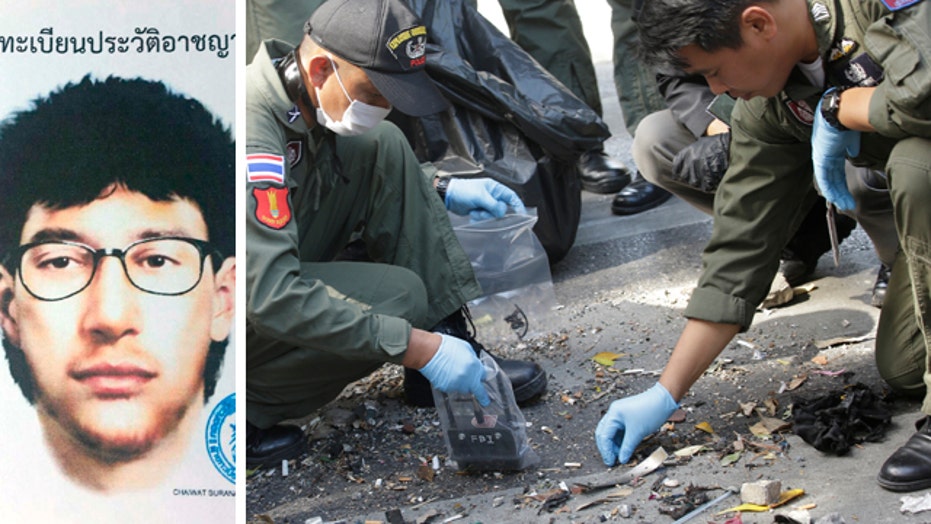 Police believe suspect did not act alone, part of a larger network

Thailand's military junta said Thursday that this week's deadly bombing in downtown Bangkok that killed 20 people was "unlikely" to have been carried out by international terrorists.

Military spokesman Col. Winthai Suvaree also said that Chinese tourists, who were among the victims, were not the "direct target."

"The security agencies have collaborated with intelligence agencies from a lot of countries and have come to the same preliminary conclusion that the incident is unlikely to be linked to international terrorism," he said in a televised statement.

Winthai did not give any details on how authorities reached this conclusion, which raised questions after police issued an arrest warrant for the prime suspect, describing him as an unidentified "foreign" man.

Two men identified as suspects after filmed by security cameras have been cleared by Thai authorities, the BBC reported.

At least 20 people were killed and more than 120 injured in Monday evening's blast at the Erawan Shrine, a popular tourist site that is known to attract Chinese visitors. Four Chinese citizens were among the dead.

A manhunt was underway for a man shown in a security video leaving a backpack at a popular Bangkok shrine just minutes before a bomb exploded there. Police released a sketch of the man on Tuesday depicting a young man wearing glasses, and the arrest warrant described him as a man with black, bushy hair, fair complexion with a prominent nose and thick lips.

Authorities have offered a 1 million baht ($28,000) reward for information leading to his arrest.

Two other people seen on the video near the man are also considered suspects in Monday's deadly bombing, police said late Wednesday.

The grainy security video shows the man, wearing a yellow T-shirt and shorts, sitting down on a bench at the shrine, taking off a black backpack and leaving it behind as he stands up and walks away. Time stamps show he left the shrine 15 minutes before the explosion, which struck just before 7 p.m.

The two possible accomplices are seen standing in front of the man, said police spokesman Lt. Gen. Prawut Thavornsiri. One of the men was wearing a red shirt and the other was in white, and they were seen leaving the area shortly before the man in yellow also leaves.

At a news conference, Prawut expressed uncertainty about the man's origin, saying the suspect "looks like a foreigner" but "might have been in a disguise and wearing a fake nose" to conceal his identity.

Prawut told reporters Wednesday night that police would continue to scrutinize closed-circuit TV footage of the area from before the blast for clues about suspects. He said that if the men in red and white shirts were innocent and aware of the suspicions against them, they should report to police.

Two days after the attack, which authorities have called the worst in Thai history, the shrine reopened to the public. No one has claimed responsibility for the blast at one of the capital's busiest intersections during evening rush hour.

The attack has raised concerns about safety in a city that draws millions of tourists.

Prime Minister Prayuth Chan-ocha "is worried about the security of people and tourists in Thailand," the police chief said.

Prayuth has called the attack "the worst incident that has ever happened in Thailand" and vowed to track down those responsible.

Thai authorities identified six victims as Thai and four as Malaysians, along with four Chinese, two people from Hong Kong including a British citizen, one Indonesian and one Singaporean. Two victims remain unidentified.

A funeral was held Wednesday for 45-year-old Waraporn Changtam, one of the victims of the bombing. Her grieving older sister, Sawaros Kumrit, had a message for those responsible for the blast.

"I don't know who you are mad at, but don't take it out on my family," she said, adding that those killed by the bomb "were good people. They were innocent."

Bangkok has seen politically charged violence in the past decade. The deadliest, in 2010, killed more than 90 people in two months and was centered on the same intersection where Monday's bomb went off. But none of those attacks included a bomb that seemed intended to produce mass casualties.