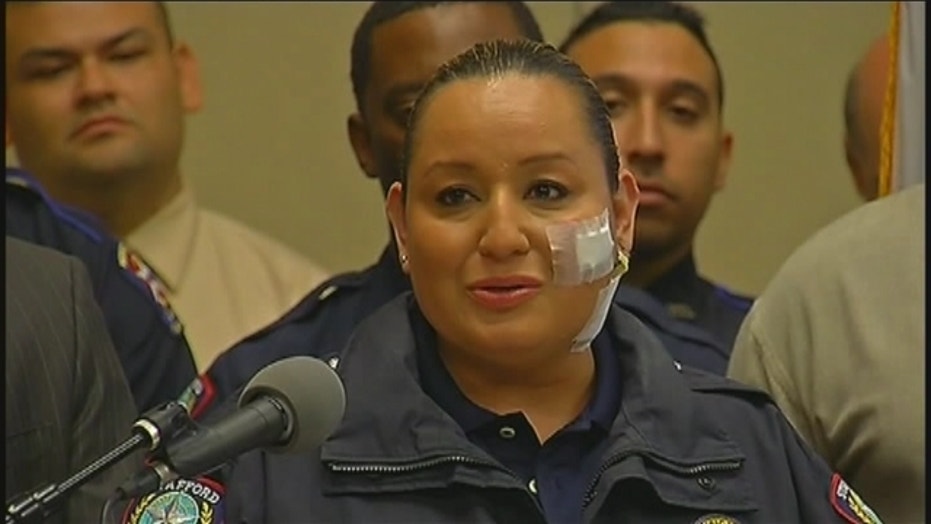 Reward Offered For Fugitives Who Shot Officer In The Face

Dash cam video released shows Officer Ann Carrizales moments after she was shot in the face and chest. Crime stoppers is offering a $10 thousand dollar reward for fugitives.

Giving up was not an option for Ann Carrizales. Not even when the Stafford, Texas police officer was shot in the face during an early morning traffic stop gone awry.

The 40-year-old former Marine and mother of two was on patrol around three in the morning last week when she pulled over three men in a four-door Nissan at a mobile home park. Her good police sense told her that something was not right as she approached the vehicle, which had suspiciously been idling at a green light moments before.

Within seconds of walking up to it, the front passenger leaned over and let out a spray of bullets, hitting Carrizales once in the cheek and once in her bulletproof vest before speeding away. With blood pouring down her face, the wounded officer returned fire, shattering the rear window of the fleeing car before calling for backup.

“Shots fired, shots fired, I’m hit,” she said into her radio in a grainy video taken from the dashboard of her patrol car.

Instead of waiting for fellow officers and an ambulance to arrive, Carrizales knew that if there was any chance of getting the thugs that shot her, she would have to give chase. And hopping in her patrol car, that’s exactly what she did.

“I knew that it was what I needed to do to catch these guys,” she told The Today Show on Thursday. “You can’t shoot me and drive away: It’s not allowed.”

She kept up with the fleeing men until they reached a neighboring area where they abandoned the car and took off on foot.

The alleged shooter, 21-year-old Sergio Francisco Rodríguez, was later found walking in the area and arrested. He is charged with aggravated assault on a police officer.

On Thursday, Carrizales and her fellow officers appealed to the public for information leading to the arrest of the other two men in the car, who are believed to be 28-year-old Freddy Henríquez and a man known as Daniel Cruz.

Rodríguez and Henríquez are both Honduran nationals who have been in the U.S. illegally for an extended period of time. The three men are suspected to be members of a local gang called the Houstones and may have ties with the Salvadoran crime group MS-13, the Houston Chronicle reports.

During a recent interview, Carrizales was shown wearing bandages on her cheek and neck. While she is off duty for the time being, she is adamant about returning to the streets and has no regrets about her actions that night.

“I had to stay in that fight because I am a mom and they shot me and they were absolutely not going to get away with that, because I will do everything I can to come home to my children every day,” she said.