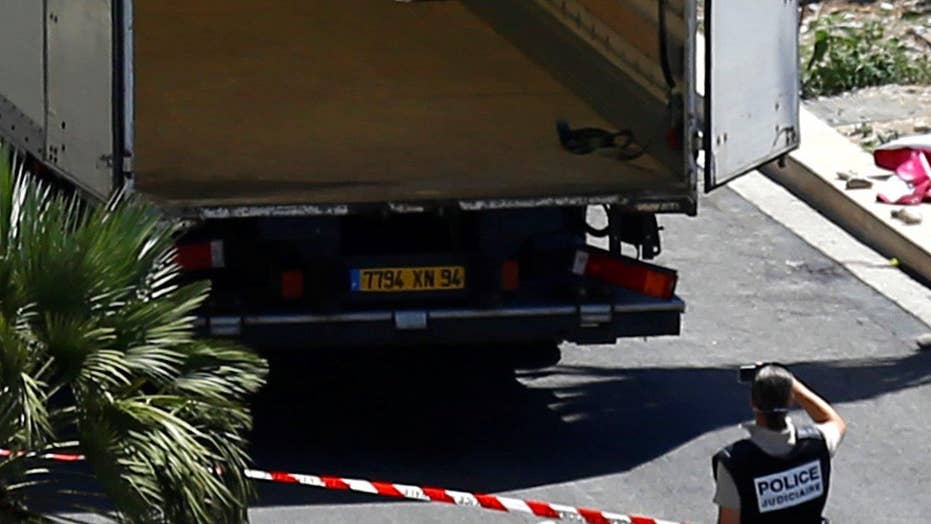 The monster behind the wheel of a box truck that plowed into Bastille Day revelers in Nice late Thursday - killing at least 84 - was a creepy petty criminal prone to violence, but not seen by police or neighbors as a religious fanatic, according to French reports.

Mohamed Lahouaiej Bouhlel, 31, once drove a delivery truck for a living, but he rented the 19-ton Renault that he turned into a killing machine on the seaside promenade where French citizens and tourists had just watched a fireworks show. Scores more were injured by what authorities called an act of terror that only ended when police shot and killed Bouhlel.

This ID, purportedly of the Nice terrorist who killed at least 84 people Thursday night, was found at the scene by police.

Although he had a string of run-ins with the law, Bouhlel was convicted of a crime for the first time in March, French Justice Minister Jean-Jacques Urvoas said.

"There was an altercation between him and another driver and he hurled a wooden pallet at the man," Urvoas told reporters.

Police found weapons and documents in the truck. (Reuters)

Bouhlel was given a suspended sentence and had to contact police once a week, which he did, Urvoas said.

Divorced, Bouhlel wore his hair like George Clooney and lived alone in an apartment in Nice’s Abattoirs neighborhood, according to French television station BFM TV.

Paris prosecutor Francois Molins told reporters police searched two locations in Nice on Friday, and confirmed that the ex-wife of the suspect has been arrested and is being held by police.

Bouhlel's neighbors on the city's east side recalled him as handsome, yet scary.

"I would say he was someone who was pleasing to women," a neighbor named Hanan told Reuters from the lobby of the apartment building where the madman lived. "But he was frightening. He didn't have a frightening face, but ... a look. He would stare at the children a lot."

No terror groups have taken credit for the attack, although ISIS-linked social media accounts have praised it. Al Qaeda has previously called on sympathizers to use trucks and cars to kill innocent civilians.

Bouhlel reportedly rented the truck earlier this week. While the promenade is typically closed to traffic, Bouhlel reportedly told police he was delivering ice cream to the festive crowd, then gunned the motor once past a checkpoint, zig-zagging through the terrified crowd as he weaved a path of carnage. Witnesses said he shoulted "Alahu Akhbar" when he jumped out and sprayed bullets at fleeing victims.

Citing Tunisian security sources, the Telegraph reported that Bouhlel was originally from that North African nation’s town of Msaken, near the coastal city of Sousse, where 38 people were gunned down by terrorists in June 2015. Bouhlel held a French residency permit for the last decade, but did not obtain French nationality, Tunisian sources said.

Other neighbors told BFM Bouhlel was not overtly religious, but had been depressed – and even aggressive - over his divorce and financial problems.

A neighbor the channel identified as Jasmine said Bouhlel was "rude and a bit weird” and had his hair cut like the famous actor.

"He kept to himself but would always rant about his wife,” she said. “He had marital problems and would tell people in the local cafe. He scared my children though."

Other neighbors told the channel Bouhlel was handsome, but creepy.

He had a police record that included assault with a weapon, domestic violence, threats and robbery but had no previous convictions for terrorism, the Telegraph reported.

Police raided several locations in and around Nice Friday. After the attack, they found a handgun, rifle and a number of fake weapons and grenades in the truck.