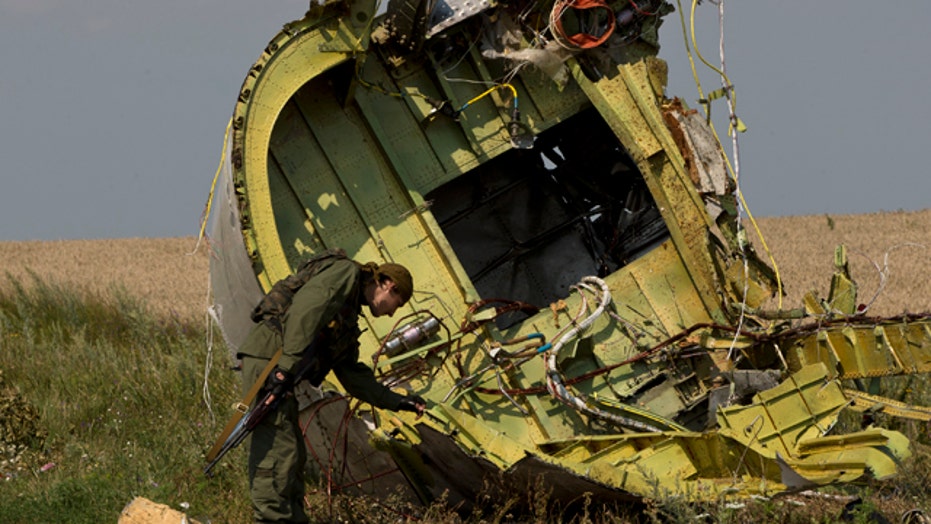 ROZSYPNE, Ukraine – As fighting continued to rage in eastern Ukraine, an international team of investigators on Thursday managed to reach the crash site of the Malaysia Airline Flight 17 for the first time since it was brought down by a missile two weeks ago.

Clashes along routes to the wreckage site between government troops and pro-Russian separatist rebels had kept the delegation from reaching the area to retrieve bodies that have been lying in open fields.

But the investigators were allowed through a checkpoint leading to the crash site at the village of Rozsypne early Thursday afternoon by a rifle-toting militiaman who then fired a warning shot to prevent reporters from accompanying the convoy.

The militiaman, who gave his name only as Sergei, told Associated Press journalists that fighting was still ongoing in Rozsypne.

The team of police and forensic experts, which comprises members from the Netherlands and Australia, are expected to initially focus their efforts on retrieving bodies still on the site and collecting victims' belongings.

Security for investigators has been a major concern as the Ukrainian army continues in its offensive to take back swathes of territory from the rebels.

National security spokesman Andriy Lysenko said a "day of quiet" was declared Thursday in response to a call for a cease-fire from UN Secretary General Ban Ki-moon.

"Ukraine has created all the conditions for the foreign experts to work," but the separatists continue to block access, he said.

Ukrainian authorities insist they are concentrating on securing highways surrounding the wreckage site. The aim, they have said, is to gradually squeeze out rebels forces.

But AP reporters near the crash site confirmed Thursday that clashes are taking place in the immediate vicinity of where the Boeing 777 came down.

Reporters who attempted to reach the crash site by another route were warned by local residents that some nearby roads have been mined. And AP journalists saw a mortar round land near Hrabove, another village around which fragments of the plane remain uncollected.

A monitoring mission from the Organization for Security and Cooperation spent Wednesday and early Thursday exploring safe routes from their base in the rebel-held city of Donetsk.

Thursday's drive took the convoy of investigators and OSCE officials from Donetsk through the town of Debaltseve, which was earlier this week retaken by the government, and later back into rebel territory.

Armored personnel carriers and waving the blue-and-yellow Ukrainian national flag could be seen in and around Debaltseve.

At one entrance to Debaltseve, local residents walked along a pontoon erected over the remains of a blown-up bridge.

It remains unclear precisely how many bodies remain at the Malaysia Airlines crash site and what condition they are in after being exposed for so long to the elements.

But Australian Foreign Minister Julie Bishop, speaking to the Australian Broadcasting Corporation from Ukraine, said she has been informed up to 80 bodies are still on the site.

A delegation from Russia's state aviation body said Thursday it also hoped to visit the site, an agency spokesman said.

Sergei Izvolsky told the AP that a delegation of Russian specialists from Rosaviatsiya was due in the Ukrainian capital, Kiev, Thursday to participate in the investigation.

Representatives of the Dutch and Ukrainian commissions would not comment on the arrival of Russian officials.

Yatsenyuk had said last week he was resigning after two parties left the coalition supporting him and parliament balked at passing laws he said were essential to fund the country's war against pro-Russian separatists.