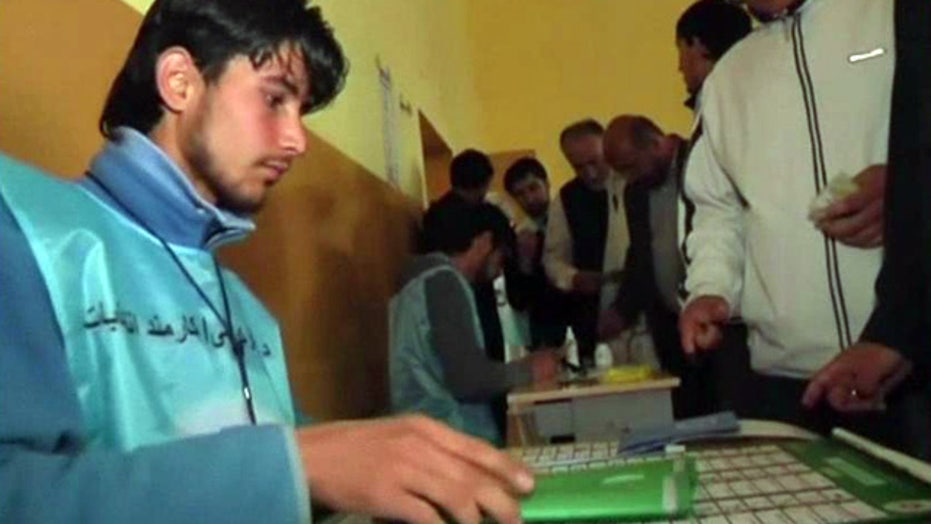 U.S. and international observers have praised Afghanistan's leaders for carrying out the country's first-ever democratic elections despite threats of violence from Taliban militants and concerns about possible fraud.

"We commend the Afghan people, security forces, and elections officials on the turnout for today's vote - which is in keeping with the spirited and positive debate among candidates and their supporters in the run-up to the election," President Obama said in a statement Saturday. "These elections are critical to securing Afghanistan's democratic future, as well as continued international support."

"I congratulate the millions of Afghan men and women from across the country who have cast their votes in presidential and provincial council elections with such an impressive turnout and enthusiasm," Rasmussen said.

The BBC reported that an estimated seven million Afghans out of 12 million eligible voters cast ballots for a new president and provincial councils Saturday. If that number is correct, it would be three million more than the number of voters in the previous presidential election in 2009. The turnout was so high that some polling centers ran out of ballots and others remained open an hour past scheduled to accommodate long lines.

Mosques and schools were converted into polling centers, and after the polls closed, ballot boxes were loaded onto trucks and donkeys to be taken to Independent Election Commission facilities to be tallied.

Officials have said partial results could be released as early as Sunday but caution it is likely to be at least a week before a complete picture emerges.

Another pressing concern for election officials was to avoid a repeat of the widespread vote-rigging that marred the 2009 vote. Strict protocols include bar codes on the ballot boxes being delivered to nearly 6,500 polling centers in all 34 provinces and plans to tally the results immediately after the vote closes and post a copy of the results at each center.

However, the BBC reported that police were preventing voters and observers from reaching polling stations in Kandahar province. The interior ministry said two police officers were arrested in Wardak province for stuffing ballot boxes. Concerns were also raised before the poll about the possible presence of "ghost" polling stations as well as the fact that the number of election cards in circulation appeared to be vastly more than the number of registered voters.

Eight candidates are vying to replace Hamid Karzai, who is constitutionally barred from running for a third term of office, having led Afghanistan since a U.S.-led invasion toppled the ruling Taliban in 2001. Of the eight, only three candidates are considered legitimate frontrunners: Abdullah Abdullah and Zalmai Rassoul, both former Foreign Ministers under Karzai, as well as former Finance Minister Ashraf Ghani Ahmadzai.

The BBC reported that analysts say Abdullah has run the most polished campaign, while Ghani has strong support among the new urban youth vote, and Rassoul is thought to be the choice of Karzai himself. All have promised to sign a security agreement with the United States that will allow thousands of foreign troops to remain in the country after 2014 -- which Karzai has refused to do. The candidates differ on some issues such as the country's border dispute with Pakistan. But all preach against fraud and corruption and vow to improve security.

A runoff to decide a winner might still be required if no candidate receives more than 50 percent of the vote. That runoff would take place May 28.

Karzai cast his ballot at a high school near the presidential palace.

Karzai's tenure has been heavily criticized as he has failed to end the endemic corruption and poverty in the country, which remains mired in violence after nearly 13 years of war. As international combat forces prepare to withdraw by the end of this year, the country is so unstable that the very fact the crucial elections are being held is touted as one of Karzai's few successes.

The eventual winner faces deep challenges. Security forces will be left to deal with the Taliban insurgency without international troops. Billions of dollars in international aid are at risk with the coalition forces' withdrawal. Expectations are high among Afghans that the new leader will alleviate poverty and clean up the government in a country that Transparency International last year ranked among the three most corrupt in the world alongside Somalia and North Korea.