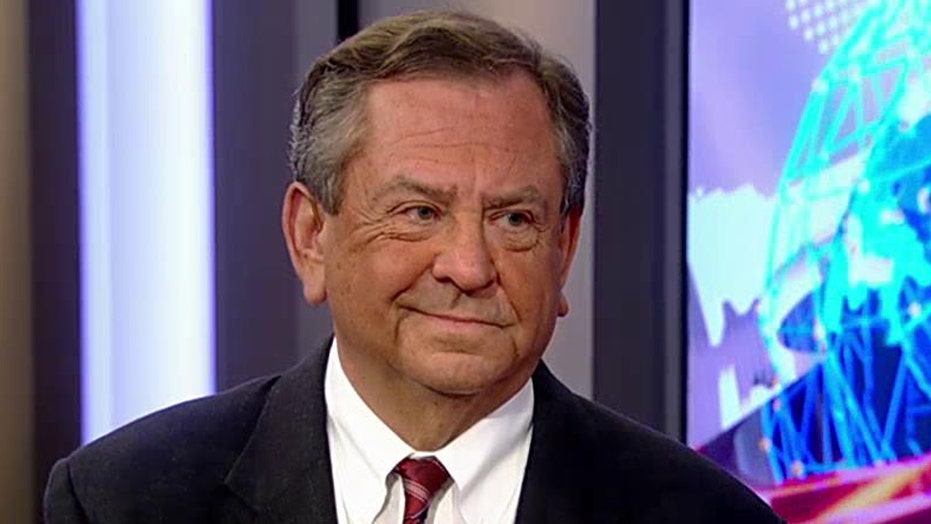 Kallstrom on vetting refugees: No databases in Syria

The number of Syrian refugees accepted into the U.S. is set for a massive increase in 2016, and critics say forged documents, a lack of access to vital Syrian government records and shorter vetting periods for the surging applicants creates a perilous cocktail that is ripe to be exploited by Islamic terrorists.

The U.S. has already accepted 1,869 Syrian refugees in 2015, but wants to increase that total more than five-fold to 10,000 in 2016 – all while cutting down the average vetting time from its current length of 18-24 months. The program has received increased attention in light of reports at least one of the terrorists responsible for Friday’s deadly attacks in Paris made his way into Europe posing as a Syrian refugee.

“Adequate vetting of refugees for failed states is impossible,” said Mark Krikorian, the executive director for the Center for Immigration Studies. “You could have Superman and James Bond and they wouldn’t do better than anybody else.”

The majority of refugees who have already come to the U.S. -- and most of those who hope to be among the next wave -- all began their journey in UN camps in countries such as Turkey, Jordan, Iraq and Egypt.

A sign welcoming Syrian refugees is placed at the entrance to the office of the Arizona governor during a rally at the Arizona Capitol. (AP)

Most of those camps are filled with Muslim migrants, as Christians and other religious minorities are generally too fearful of being targeted by violence or the sex trade.

“The Christians who leave the country stay away from the camps. Only the Muslims leave the country and stay on the border,” said one Syrian Christian who came to the U.S. a year ago. He spoke to FoxNews.com on the condition that his name not be used for fear that his family still living in Syria could face reprisal.

“Some of the men in the camps belong to ISIS,” he said. “Not all of them are actually from Syria – they just exited Syria, but are originally from Afghanistan or surrounding areas. They are joining the refugees.”

Those who wish to leave the camps and be resettled as refugees must first register with the Office of the United Nations High Commissioner for Refugees, or  UNHCR. Applicants are vetted through a procedure that now includes an iris scan. This is done so the same applicant can verifiably be tracked through each stage of the process. If an applicant gains refugee status and is tentatively placed with the U.S., American security agencies take over the vetting process.

The unclassified aspects of the process were described in detail to FoxNews.com and other outlets by three senior Obama administration officials who took part in a State Department conference call on Tuesday. Additional details were relayed to FoxNews.com by longtime officers within refugee placement organizations. The State Department and Department of Homeland Security are the primary vetting apparatuses; however, they compare information with the FBI, Department of Defense and other government agencies.

The first component is a “biometric” screening. That means an applicant’s name, fingerprints, date of birth and other biographical details are scrutinized by multiple international and domestic investigative bodies. If there are FBI or DOD records, they are looked at. A medical screening occurs. Passports and other government IDs are tested for forensic authenticity.

“If someone told us, ‘While the family was off at work, a barrel bomb fell on the house and their documents were destroyed,’ that could be a credible reason for not having one’s documents,” a senior administration official said. “But we would follow up on that and talk about where they lived and when this incident happened. And, again, we can check that with known country conditions, information, to see if that is a consistent explanation for having – for being missing certain documents that an applicant would otherwise be expected to have.”

But the scientific and data analysis championed by the administration is far from foolproof, experts say. Refugees could have forged or counterfeit passports and, even though DHS has a forensic document lab with genuine blanks of every country’s passports, the Syrian conflict still presents challenges. FBI Director James Comey acknowledged the issue at a congressional hearing last month.

"If someone has never made a ripple in the pond in Syria in a way that would get their identity or their interest reflected in our database, we can query our database until the cows come home, but there will be nothing show up because we have no record of them," he said.

There is also a “non-adversarial” in-person overseas interview of the applicant conducted by a DHS agent that’s been specially trained during an eight-week course in how to probe an applicant’s credibility.

“If somebody says, ‘I was at a demonstration in Aleppo and the soldiers came, or the police came, and something happening,’ we can actually look back and see, ‘Was that consistent with known country conditions at that time in that place?’” a senior administration official said. “And we can follow up lines of questioning that would be appropriate under those circumstances.”

Krikorian tells a story of a particularly skilled adjudicator he witnessed in the past who was trying to determine if a marriage between two people was legitimate. The agent asked the woman for some documents in her purse, which was on the floor. As she bent down to get it, she banged her head on a bulky computer screen that hung over the agent’s desk.

“The first thing the adjudicator did was look at the husband to see his reaction – was he blasé or was he concerned,” Krikorian said.

But Krikorian adds that interviewers aren’t mind readers and a talented liar can beat the most earnest agent.

“It’s a complement to the other kinds of screening, but it can’t be a substitute,” he said. “You can’t rely on it. There are limitations to interviewing as a means of smoking out bad guys.”

Any applicant who triggers an alarm goes through an additional interagency check, and any Syrian applicant must go through a special additional review conducted by a refugee specialist, who looks at classified and non-classified materials in an attempt to once again verify an applicant’s story.

“In terms of criminal history, we do the best we can with the resources that we have,” a senior administration official said.

But “the best” is not always perfect. One example is the case of two Iraqi refugees who were accepted into the U.S. and lived for a time in Bowling Green, Ky. – before they were outed as former Al Qaeda in Iraq terrorists who had shot at U.S. troops and planted IEDs.

“We need to take this as a case study and draw the right lessons from it, and not just high-five over this,” retired Army Lt. Gen. Michael Barbero told ABC about the case in 2013. “How did a person who we detained in Iraq – linked to an IED attack, we had his fingerprints in our government system – how did he walk into America in 2009?”

Once in the country, there is precious little oversight of refugees. What tabs are kept on the refugees are often limited to refugee resettlement agencies, such as the Church World Service.

“Once they’re here, we provide services for the first few months and typically we’re in touch for much longer even after that,” said Jen Smyers, the director of policy and advocacy with the immigration and refugee program at CWS. “But after they’re here for one year they can apply and get a green card and get that process started.”

Sometimes, refugees move on without notice. A case like that was brought to light on Tuesday when the Louisiana government discovered a Syrian refugee who had initially been resettled in Baton Rouge left after only a few days without providing a new address to Catholic Charities, the organization that helped settle him, according to WBRZ. State Police eventually found the refugee living in Washington D.C.

Problems with approving flawed applicants and losing track of refugees occurred when the program was limited to smaller numbers and had a lengthier review period. The administration is confident it can fix these issues even as it expands its refugee ranks and shrinks the vetting period.

“We screen vastly larger numbers than what we are talking about with respect to refugees already, so we can certainly scale on this population,” a senior administration official said. “It will require us adapting and flexing, but I think it’s well within our capacity.”

“Doing database checks doesn’t help much if you don’t have anything useful in the database on most people,” he said. “We don’t have any information on who these people are. We don’t have access on Syrian vital statistics or government records, if they even still exist.”