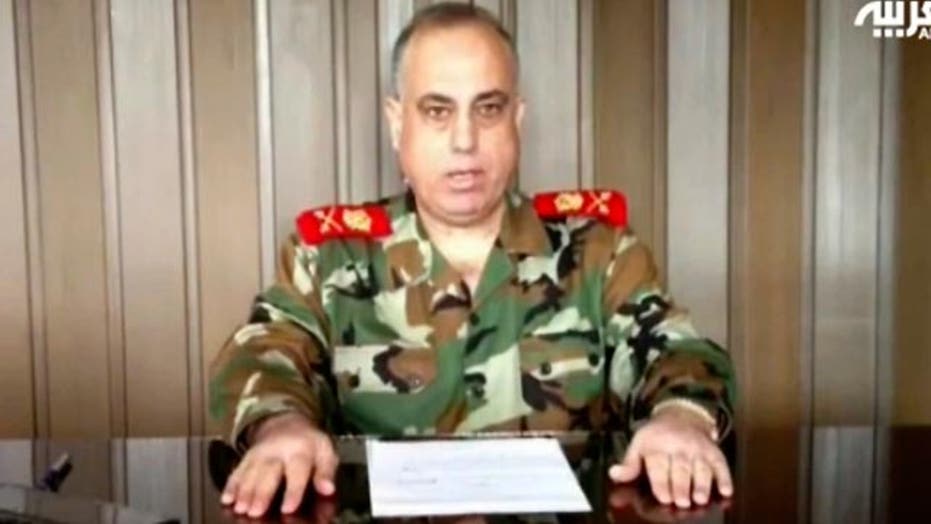 BEIRUT – The general who heads Syria's military police has defected and joined the uprising against President Bashar Assad's regime, one of the highest walkouts by a serving security chief during the country's 21-month uprising, a pan Arab TV station has reported.

Al-Shallal's defection comes as military pressure builds on the regime, with government bases falling to rebel assault near the capital Damascus and elsewhere across the country. On Wednesday, the Britain-based Syrian Observatory for Human Rights said government shelling in the northeastern province of Raqqa killed at least 20 people, including women and children.

Dozens of generals have defected since Syria's crisis began in March 2011. In July, Brig. Gen. Manaf Tlass was the first member of Assad's inner circle to break ranks and join the opposition.

Al-Shallal is one of the most senior and held a top post at the time that he left. He said in the video that the "army has derailed from its basic mission of protecting the people and it has become a gang for killing and destruction." He accused the military of "destroying cities and villages and committing massacres against our innocent people who came out to demand freedom."

Thousands of Syrian soldiers have defected over the past 21 months and many of them are now fighting against government forces. Many have cited attacks on civilians as the reason they switched sides.

The Observatory said the shelling in an agricultural area of Raqqa province near the village of Qahtaniyeh killed 20, including eight children, three women and nine others.

An amateur video showed the bodies of a dozen people including children lying in a row inside a room. Some of them had blood on their clothes, while weeping could be heard in the background.

The videos appeared genuine and corresponded to other AP reporting on the events depicted.

Also Wednesday, activists said rebels were attacking the Wadi Deif military base in the northern province of Idlib. The base, which is near the strategic town of Maaret al-Numan, has been under siege for weeks.

The Observatory said at least five rebels were killed in the fighting that started after midnight. It added that Syrian army warplanes attacked rebel positions in the areas.

"It is the heaviest fighting in the area in months," said the Observatory, which relies on activists throughout Syria.

In October, rebels captured Maaret al-Numan, a town on on the highway that links the capital Damascus with Aleppo, Syria's largest city and a major battleground in the civil war since July.

The attack on Wadi Deif comes a day after rebels captured the town of Harem near the Turkish border. The rebels have captured wide areas and military posts in northern Syria over the past weeks.

Syria's crisis began with protests demanding reforms but later turned into a civil war. Anti-regime activists estimate more than 40,000 have died in the past 21 months.

Their visit to Moscow comes two days after Assad met in Damascus with international envoy to Syria Lakhdar Brahimi. Brahimi, who is scheduled to go to Moscow before the end of the month, said after the talks Monday that the situation was "worrying" and gave no indication of progress toward a negotiated solution for the civil war.

Brahimi is still in Syria and met Tuesday with representatives of the opposition National Coordination Body, state-run news agency SANA said. Head of the group Hassan Abdul-Azim said Brahimi briefed them on the efforts he is exerting to reach an "international consensus, especially between Russia and the United Stated to reach a solution."

Rajaa al-Naser, NCB's spokesman, said his group has put forward proposals adding that there would be no exit but through halting violence and forming a "transitional government with full prerogatives."