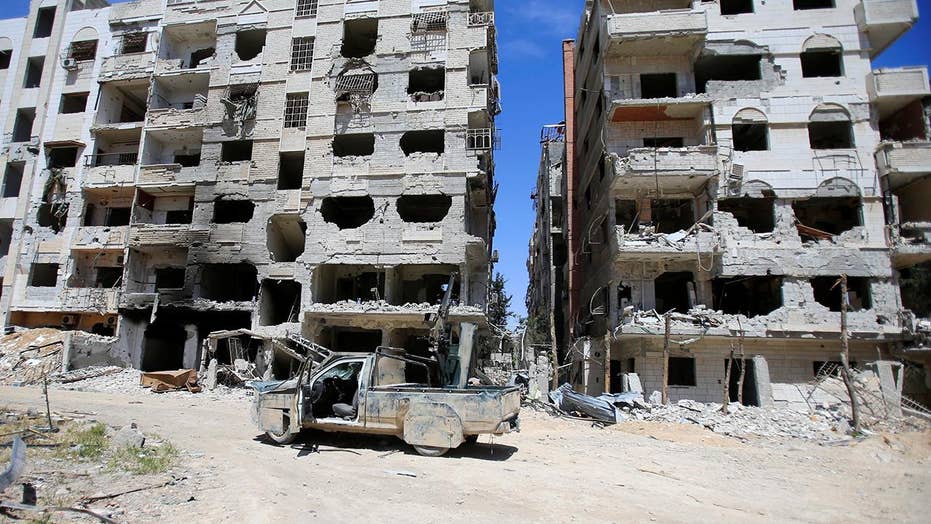 International investigators get access to site, according to Syrian state TV. Rich Edson reports from the State Department.

A member of an international watchdog tasked with investigating an alleged Syrian chemical weapons attack accused his superiors of inserting bias and language that “misrepresents the facts” in an early summary of his team’s findings, an email published by WikiLeaks shows.

The message, purportedly written by a member of the Organization for the Prohibition of Chemical Weapons, was sent to his higher-ups in June 2018, weeks after he says he and others “conducted the investigation into the alleged chemical attack in Douma” on April 7 of that year. The attack, which the Syrian government has been blamed for, left at least 43 people dead.

“After reading this modified report… I was struck by how much it misrepresents the facts,” the email reads. “Many of the facts and observations outlined in the full version are inextricably interconnected and, by selectively omitting certain ones, an unintended bias has been introduced in the report, undermining its credibility."

The email adds: “In other cases, some crucial facts that have remained in the redacted version have morphed into something quite different to what was originally drafted."

The headquarters of the Organization for the Prohibition of Chemical Weapons in The Hague, Netherlands. (AP/File)

The author takes issue with the draft version stating that the “team has sufficient evidence at this time to determine that chlorine, or another reactive chlorine-containing chemical, was likely released from cylinders,” writing that the line is “highly misleading and not supported by the facts.”

“The only evidence available at this moment is that some samples collected… were in contact with one or more chemicals that contain a reactive chlorine atom,” he said in the email. “Purposely singling out chlorine gas as one of the possibilities is disingenuous.”

The draft version of the report also “states that the gas was likely released from the cylinders,” the author notes, but “the original report purposely emphasized the fact that, although the cylinders might have been the sources of the suspected chemical release, there was insufficient evidence to affirm this.”

The member concludes his email by calling for the OPCW to release his team’s fact-finding report “in its entirety as I fear that this redacted version no longer reflects the work of the team.”

“If the redacted version is to be released, I respectfully request to attach my differing observations,” he adds.

Fox News has reached out to the OPCW but the watchdog has not yet responded to a request for comment.

The organization in March this year released its final report on the attack in Douma, saying that it found “reasonable grounds” that chlorine was used as a weapon. However, the report – which was delivered to the U.N. Security Council – did not go into who was behind the attack, The Associated Press says.

Fernando Arias, the OPCW's director-general, used his opening statement to the group's annual meeting in The Hague on Monday to defend the final report, which he says was written following careful consideration of all information.

“I stand by the impartial and professional conclusions reached by the fact-minding mission,” he said.

In a statement released in March, the OPCW said their team visited Douma, analyzed samples taken from the scene and from people affected, interviewed witnesses and studied toxicological and ballistics analyses.

The investigators were delayed by several days from reaching the scene by security concerns, leading to fears that evidence could degrade or be cleaned up.

But the data they eventually amassed and studied provided “reasonable grounds that the use of a toxic chemical as a weapon” took place, the OPCW said.

Survivors reached by The Associated Press in the aftermath of the attack said they were overwhelmed by the smell of chlorine on the night of April 7. Activists said many of the dead were found with foam around their mouths, an indicator for suffocation. Medical workers said they treated symptoms including difficulty breathing and fainting.

The United States, Britain and France blamed Syrian government forces for the attack and launched punitive airstrikes in the days afterward. Syria has denied responsibility.

Douma was the final target of the government’s sweeping campaign to seize back control of the eastern Ghouta suburbs of Damascus from rebels after seven years of revolt. Militants gave up the town days after their alleged attack.