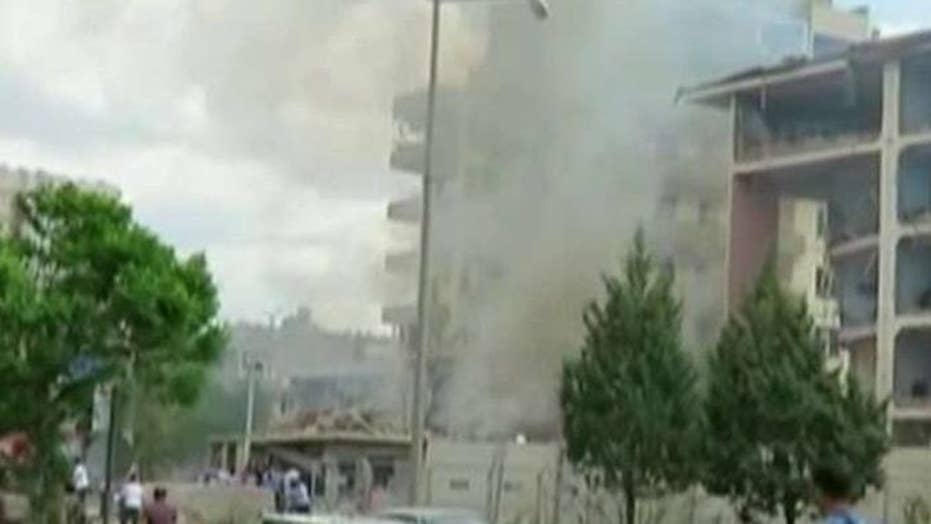 ANKARA, Turkey – A Kurdish rebel suicide bomber detonated an explosives-laden vehicle outside a police headquarters near Turkey's border with Syria Wednesday, killing at least three people and wounding some 30 others, officials said.

The attack in the town of Midyat, in Mardin province, came amid a surge in violence in the country and a day after a car bomb hit a police vehicle in Istanbul, killing 11 people during the morning rush hour. It took place as funerals for the Istanbul victims were underway.

Speaking in Istanbul, Prime Minister Binali Yildirim said the victims of the attack in the town of Midyat, in Mardin province, were a police officer and two civilians. It was not clear if the toll included the suicide bomber.

In televised remarks, Yildirim said the attack was carried out by the outlawed rebel Kurdistan Workers' Party, or PKK. He said concrete barriers and other security measures in place at the police headquarters had prevented a greater loss of life.

"Those who carried out the attack are (members of) the murderous PKK organization," Yildirim told reporters after visiting survivors of the Istanbul attack in hospital.

News reports said the assailant rammed the vehicle into protective concrete blocks surrounding the town's main police station located on a street lined with cafeterias, shops and businesses. Television images from the scene showed thick smoke rising from the site of the attack, which destroyed the facade of the police headquarters building and blew out windows of nearby buildings.

The private Dogan news agency said the vehicle was laden with a half-ton of explosives.

As with previous terror attacks, authorities on Wednesday imposed a media gag order, barring the broadcast and publication of graphic images from the aftermath of the Midyat attack and the reporting of details of the police investigation.

Turkey has been hit by a series of attacks in the past year. PKK rebels have targeted police and military personnel since July, when a fragile peace process between the rebels and the government collapsed. The Islamic State group has also been blamed for a series of deadly bombings in Turkey, which is part of the U.S.-led coalition against IS.

PKK has waged a decades-long insurgency against the Turkish state in a conflict that has claimed tens of thousands of lives. The group is considered a terror organization by Turkey and its allies.

The agency also said that 22 PKK militants were killed in previous strikes in northern Iraq on Sunday.

An estimated 500 Turkish security personnel have been killed while fighting with the Kurdish rebels since July 2015, according to the military, which claims to have killed 4,900 PKK militants in Turkey and northern Iraq.

Mardin, where government forces are battling Kurkish militants, has endured similar attacks in the past months. In May, three people were killed in a car bombing by Kurdish rebels against a gendarmerie station in Midyat. A soldier was killed and six others were wounded in a car bomb attack against their outpost in April.

Last week, the military announced that it had ended a large-scale operation to flush out Kurdish militants from the nearby Syrian border town of Nusaybin, also in Mardin province.