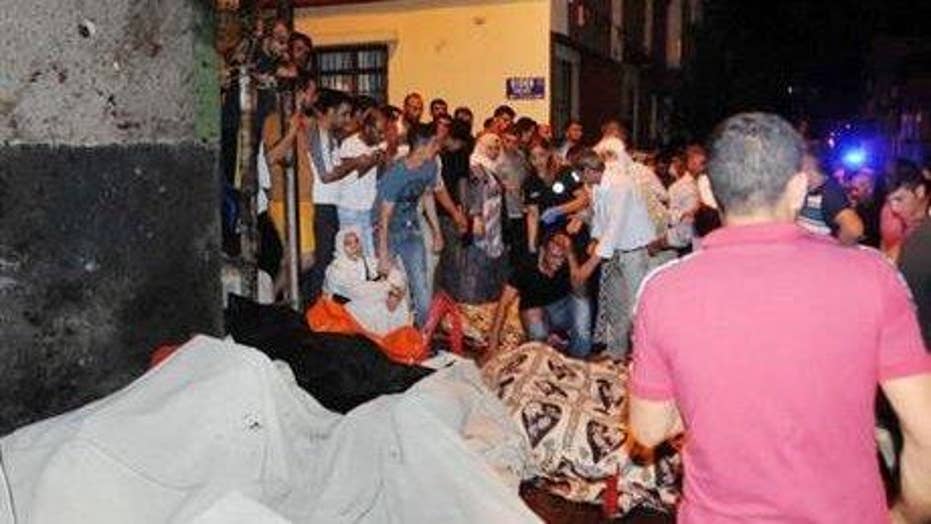 The suicide bomber in a Turkish wedding party attack that killed dozens of people was between 12 and 14 years old, Turkey's president announced Sunday, blaming the Islamic State terror group for the massacre.

Recep Tayyip Erdogan spoke in a live nationally-televised address in front of Istanbul city Hall. At least 51 people were killed and dozens of others wounded in the attack late Saturday in the southeastern city of Gaziantep.

Erdogan added that there was “absolutely no difference” between ISIS, Kurdish rebels and the movement behind the U.S.-based cleric Fethullah Gulen, calling them terrorists. He said 69 people were wounded, with 17 of them in critical condition.

The remains of a suicide vest have been recovered at the site, according to the state-run Anadolu Agency, citing a statement by the chief public prosecutor's office.

"We stand with the people of Turkey as they defend their democracy in the face of all forms of terrorism. We are in close touch with Turkish authorities," National Security Council spokesman Ned Price responded, calling the attack "barbaric."

The shoe of a young victim and a piece of metal lay near the scene just hours after Saturday's bomb attack in Gaziantep, Turkey. (IHA via AP)

Turkey has been the target of attacks in the past year that have been claimed by Kurdish militants linked to the outlawed Kurdistan Workers’ Party (PKK) or were blamed on ISIS. In June, suspected Islamic State militants attacked Istanbul’s main airport with guns and bombs, killing 44 people. A dual suicide bombing blamed on ISIS at a peace rally in Turkey's capital, Ankara, in October killed 103 victims.

Earlier this week, a string of bombings blamed on the PKK that targeted police and soldiers killed at least a dozen people. A fragile, 2 ½ year-long peace process between the PKK and the government collapsed last year, leading to a resumption of the three-decade-long conflict.

"This was a barbaric attack. It appears to be a suicide attack. All terror groups, the PKK, Daesh, the (Gulen movement) are targeting Turkey. But God willing, we will overcome,” Deputy Prime Minister Mehmet Simsek told NTV television.

Fatalities from Terrorist Attacks in Middle East and Africa | FindTheData

Daesh is an Arabic name for ISIS.

Simsek later traveled to Gaziantep along with the country's health minister to visit the wounded and inspect the site of the attack. He characterized the attack as “barbaric.”

"This is a massacre of unprecedented cruelty and barbarism," he told reporters in Gaziantep. "We ... are united against all terror organizations. They will not yield."

Prime Minister Binali Yildirim condemned the bombing that turned "a wedding party into a place of mourning" and vowed to prevail over the "devilish" attacks.

"No matter what this treacherous terror organization is called, we as the people, the state, and the government will pursue our determined struggle against it," he said.

A brief statement from the Gaziantep governor's office said the bomb attack on the wedding in the Sahinbey district occurred at 10:50 p.m.

Mehmet Tascioglu, a local journalist, told NTV television, that the huge explosion could be heard in many parts of the city.

Police sealed off the site of the explosion and forensic teams moved in. Hundreds of residents gathered near the site chanting "Allah is great" as well as slogans denouncing attacks.