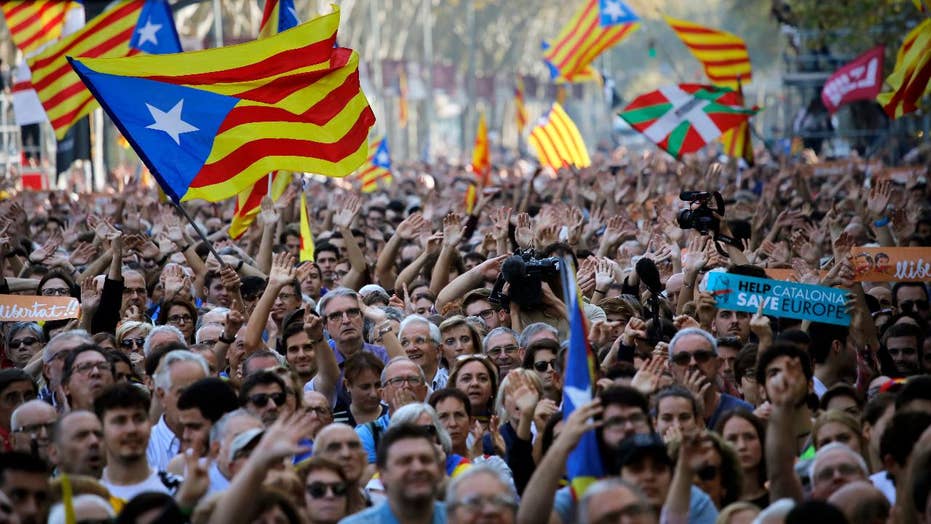 Spain's state prosecutor said Monday that he would seek charges of rebellion, sedition and embezzlement against members of Catalonia's ousted secessionist government, pushing the crisis over the region's independence declaration into an uncertain new phase.

Chief prosecutor Jose Manuel Maza said he would ask judges for preventive measures against the politicians and the governing body of the Catalan parliament that allowed a vote to declare independence last week. He didn't specify if those would include their immediate arrest and detention before trial.

The rebellion, sedition and embezzlement charges carry maximum sentences of 30, 15 and six years in prison, respectively. It wasn't immediately clear when judges would rule on the prosecutors' request.

Maza didn't name any of those facing charges, but they include regional leader Carles Puigdemont, his No. 2 Oriol Junqueras and Catalan parliamentary speaker Carme Forcadell.

The announcement came as Catalonia's civil servants returned to work for the first time since Spain dismissed the separatist regional government and imposed direct control.

In addition to the sedition charges, Spain's government has said the fired leaders could be charged with usurping others' functions if they attempt to carry on working.

Puigdemont traveled to Brussels, according to a Spanish government an official who requested anonymity because he wasn't authorized to be named in media reports. The trip came after Belgian Asylum State Secretary Theo Francken said over the weekend that it would be "not unrealistic" for Puigdemont to request asylum.

The uncertainty over Puigdemont's whereabouts and his plans continued the game of political cat-and-mouse with which the Catalan leader has tormented the central government.

Also Monday, Puigdemont's party indicated it is ready to fight in the Dec. 21 early regional election called by the national government, scotching fears the pro-independence parties might boycott the ballot to deny it legitimacy. The center-right PDeCAT party vowed to defeat pro-union political forces in Catalonia.

As dozens of journalists, curious onlookers and bemused tourists gathered in the square outside the Gothic government palace in central Barcelona, residents expressed confusion about who was actually in charge of Catalonia.

"What I really think is that nobody is in charge right now," she said.

At least one portrait of Puigdemont was still hanging on a wall inside the Catalan government's Generalitat building.

At least one member of the ousted government defied his dismissal by showing up at work and posting a photo on Twitter from his formal office.

"In the office, exercising the responsibilities entrusted to us by the people of Catalonia," said Josep Rull, who until last week was the region's top official in charge of territorial affairs.

Two police officers entered and left the building, followed minutes later by Rull, who told reporters and supporters that he would continue carrying out his agenda.

But there were no official events listed on the regional government's public agenda that is published online daily. Meanwhile, the two separatist parties in the former Catalan governing coalition held separate meetings to decide their next move.

Spanish authorities say deposed officials will be allowed to take their personal belongings from official buildings, but are barred from performing any official duties.

Interior Minister Juan Ignacio Zoido said Monday that the government was giving the separatist politicians "a few hours" of time because the goal was "to recover normality in a discreet way and under the principle of minimal intervention" from central authorities.

Catalonia's regional parliament proclaimed independence from Spain in a secret ballot Friday. The Spanish government dissolved the legislature, fired the government and regional police chief and called a new election for Dec. 21.

Spanish Foreign Minister Alfonso Dastis said Sunday that Puigdemont would be eligible to run in the election, provided he is not imprisoned.

"I don't know what kind of judicial activity will happen between now and Dec. 21. If he is not put in jail at that time I think he is not ineligible," Dastis told The Associated Press, speaking before prosecutors announced they were seeking charges.

The vote to secede came after an Oct. 1 referendum in favor of independence that was deemed illegal by Spain's constitutional court.

Puigdemont has vowed peaceful and "democratic opposition" to his Cabinet's dismissal, but he hasn't clarified if that means accepting an early regional election as a way out of the deadlock.

Separatist parties and grassroots groups have spoken of waging a campaign of disobedience to hamper the efforts by central authorities to run the region.

A key factor will be how Catalonia's estimated 200,000 public workers react to their bosses' dismissal, and whether any stay away from work in protest.

Secession moves by this wealthy northeastern region of 7.5 million have tipped Spain into its deepest crisis in decades.

On Sunday, hundreds of thousands took part in an anti-independence demonstration in Barcelona, calling for Catalonia to remain in Spain and backing Rajoy's use of unprecedented constitutional powers to wrest control from the pro-independence regional administration.

Spanish financial markets rose Monday after a poll suggested more Catalans oppose the declaration of independence than support it. The Ibex 35 stock index was up 1.4 percent at 10,338 points, about as much as it had fallen on Friday. Spanish government bonds were also higher.