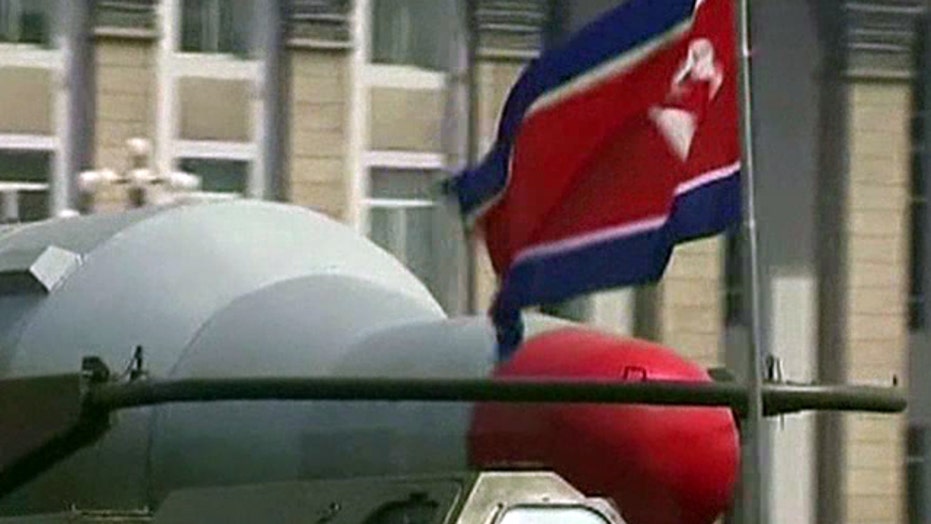 A top South Korean official said Monday he misspoke earlier in the day when he told lawmakers there is an "indication" that North Korea is preparing for a nuclear test. But that doesn't change what Seoul has been saying for months: that Pyongyang has already prepared a tunnel for a nuclear blast and can use it whenever it wants.

When a lawmaker asked whether there was an indication of increased personnel and vehicles at the North's nuclear test site, Unification Minister Ryoo Kihl-jae said "there is such an indication." He said he couldn't say more because it involved confidential intelligence.

The comments in a parliamentary session were recorded on video, but Ryoo later told lawmakers he couldn't remember making them and didn't mean to say them. He said he was "startled" by reports carrying his earlier comments.

A Unification Ministry official said that Ryoo had intended to say that North Korea has long been ready to conduct a nuclear test. She spoke on condition of anonymity because she wasn't authorized to speak publicly about the matter.

After Ryoo's initial comments, South Korean Defense Ministry spokesman Kim Min-seok said there are vehicle and personnel activities at the northeastern test site but they are seen as "usual" activities, not an "indication for a nuclear test." Kim said North Korea can conduct a nuclear test anytime if decides to do so.

South Korea has said the North prepared two tunnels for a nuclear test, but used only one Feb. 12.

The confusion over a possible nuclear test came a day after another top South Korean official said a North Korean missile test may be in the works around Wednesday.

Either a nuclear test or a missile test would escalate tensions that have been rising for weeks on the Korean Peninsula, and would likely invite a new round of U.N. Security Council sanctions over North Korea's nuclear and rocket activity. The U.S. and South Korea have been raising their defense posture, and foreign diplomats were considering a warning from Pyongyang that their safety in North Korea could not be guaranteed beginning Wednesday.

After Ryoo's initial comment, United Nations Secretary-General Ban Ki-moon urged North Korea on Monday not to carry out a new nuclear test, saying it would be a "provocative" act amid soaring tensions.

"I have repeatedly expressed my great concern about the continued inflammatory rhetoric from Pyongyang," Ban told reporters in the Netherlands after meeting Dutch Foreign Minister Frans Timmermans. "Making any threat relating to nuclear weapons is not a game."

North Korea has unleashed a flurry of war threats and provocations over U.N. sanctions for its last nuclear test, and over ongoing U.S.-South Korean military drills, which the allies say are routine but Pyongyang says is a preparation for a northward invasion.

Last week, North Korea warned nations with embassies in Pyongyang that it would not be able to guarantee the safety of their staffs as of Wednesday.

The warning prompted South Korean President Park Geun-hye's national security director to say that Pyongyang may be planning a missile launch or another provocation around Wednesday, according to presidential spokeswoman Kim Haing.

During a meeting with other South Korean officials, the official, Kim Jang-Soo, also said the notice to diplomats and other recent North Korean actions are an attempt to stoke security concerns and to force South Korea and the U.S. to offer a dialogue. Washington and Seoul want North Korea to resume the six-party nuclear talks -- which also include China, Russia and Japan -- that it abandoned in 2009.

The roughly two dozen countries with embassies in Pyongyang appeared to be staying put, for now at least.

Sweden, which looks after U.S. interests in North Korea because Washington and North Korea lack diplomatic relations, and Brazil have no plans to withdraw any diplomats from Pyongyang at this stage, according to their foreign ministries Sunday. Brazil said it is keeping a close eye on the situation but at this time see no reason to change the decision. There has been no advisory that staff at the Egyptian Embassy will leave or suspend their work.

The Pentagon has strengthened missile defenses and made other decisions to combat the potential threat, and postponed a missile test, scheduled for this week in California, to avoid raising tensions further. U.S. Gen. Martin Dempsey, the Joint Chiefs of Staff chairman, said Sunday that he doesn't believe North Korea will engage in military action soon, "but I can't take the chance that it won't."

Dempsey said the U.S. has been preparing for further provocations or action, "considering the risk that they may choose to do something" on one of two nationally important anniversaries -- April 15, the birth of North Korean founder Kim Il Sung, and April 25, the creation of the North Korean army.

Tensions between Seoul and Pyongyang led South Korea's Joint Chiefs of Staff to announce Sunday that its chairman had put off a visit to Washington. The U.S. military said its top commander in South Korea had also canceled a trip to Washington.

The South Korean defense minister said Thursday that North Korea had moved a missile with "considerable range" to its east coast, possibly to conduct a test launch. His description suggests that the missile could be the Musudan missile, capable of striking American bases in Guam with its estimated range of up to 4,000 kilometers (2,490 miles).

North Korea is not forcing South Korean managers to leave the factory complex, and about 500 of them remained at Kaesong on Monday. But the entry ban at the park, the last remaining inter-Korean rapprochement project, is posing a serious challenge to many of the more than 120 South Korean firms there because they are running out of raw materials and are short on replacement workers. More than a dozen of the companies have stopped their operations in Kaesong.

A high-level North Korean official visited the industrial zone on Monday, the official Korean Central News Agency reported. It said that Kim Yang Gon, secretary of the Central Committee of the Workers' Party of Korea, blamed South Korea for making it impossible to operate to zone as usual.

South Korea's finance minister, Hyun Oh-seok, said Monday that it is "quite ridiculous" for North Korea to be closing the border at Kaesong. "North Korea has nothing to gain from this kind of things," he said at a news briefing.

Hyun said the government is looking at ways to help Kaesong firms.

Chinese President Xi Jinping said Sunday -- without specifically mentioning North Korea -- that no one country should be allowed to upset world peace.

"The international community should advocate the vision of comprehensive security and cooperative security, so as to turn the global village into a big stage for common development rather than an arena where gladiators fight each other. And no one should be allowed to throw the region, or even the whole world, into chaos for selfish gains," Xi said Sunday at the Boao Forum for Asia, a China-sponsored talk shop for the global elite. He said China would work to reduce tensions over regional hotspots.

Seoul and Washington are taking the threats seriously, though they say they have seen no signs that Pyongyang is preparing for a large-scale attack.

Kim Jang-soo, the national security director, said the North would face "severalfold damages" for any hostilities. Since 2010, when attacks Seoul blames on North Korea killed 50 people, South Korea has vowed to aggressively respond to any future attack.

In recent weeks, the U.S. has followed provocations from North Korea with shows of force connected to the joint exercises with South Korea. It has sent nuclear capable B-2 and B-52 bombers and stealth F-22 fighters to participate in the drills.

In addition, the U.S. said last week that two of the Navy's missile-defense ships were moved closer to the Korean Peninsula, and a land-based missile-defense system is being deployed to the Pacific territory of Guam later this month. The Pentagon last month announced longer-term plans to strengthen its U.S.-based missile defenses.

North Korea successfully shot a satellite into space in December and conducted its third nuclear test in February. It has threatened to launch a nuclear attack on the United States, though many analysts say the North hasn't achieved the technology to manufacture a miniaturized nuclear warhead that could fit on a long-range missile capable of hitting the U.S.