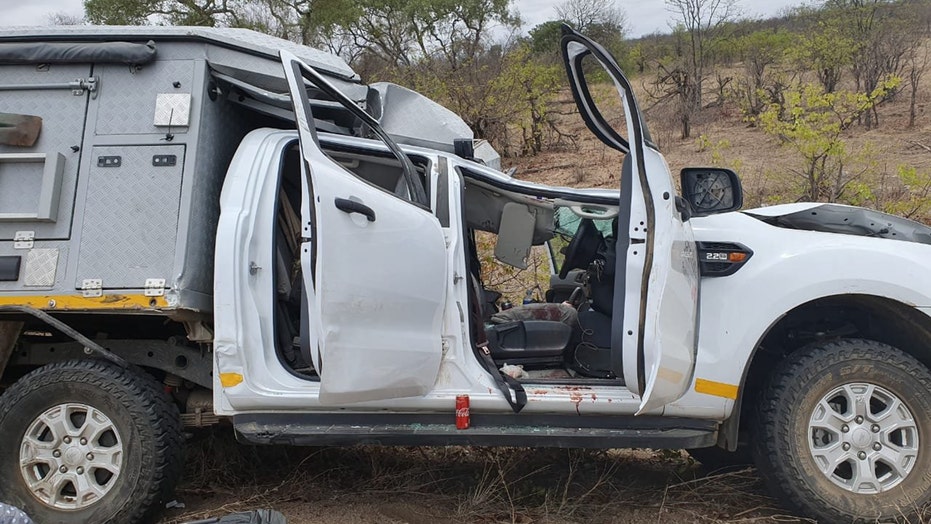 A tourist from Switzerland who was critically injured when a giraffe was struck by a minibus and fell on his safari vehicle at a national park in South Africa died from his injuries at a hospital on Wednesday, according to officials.

South African National Parks said in a news release the incident happened Sunday at Kruger National Park, when a minibus carrying 13 people struck a giraffe that stepped into the road, sending the animal careening onto an oncoming rental safari vehicle traveling in the opposite direction.

“The medical personnel who rushed to the scene of the accident stabilized the Swiss driver, before airlifting him to a medical facility," SANParks spokesman Ike Phaahla said in a statement. "The accident resulted in the death of the giraffe; whilst two occupants from the combi were also treated for minor injuries."

A total of four people were injured in the accident. Photos released by the national park showed the extent of damage to the minibus and rental safari vehicle.

A tourist from Switzerland died after his rental safari vehicle was crushed by a giraffe that was struck by another vehicle on Saturday. (Kruger National Park)

The Swiss tourist, identified by police as Roland Keller, was transferred to Milpark Hospital in Johannesburg, where he died Wednesday, Sowetan Live reported.

The giraffe was struck by a minibus and then sent careening into another vehicle. (Kruger National Park)

Park officials said the incident was being investigated by the South African Police Service.

A spokesperson told Sowetan Live that authorities have changed a case of reckless and negligent driving against the driver of the minibus that hit the giraffe to one of culpable homicide after Koller's death.

Giraffes are the world's tallest mammals, which can grow between 14 to 19 feet in height and typically weigh between 1,750 and 2,800 pounds, according to National Geographic.

"A giraffe's legs alone are taller than many humans — about 6 feet," according to the magazine. "These long legs allow giraffes to run as fast as 35 miles an hour over short distances and cruise comfortably at 10 miles an hour over longer distances."

Park officials said they are reminding the public to be aware of the various kinds of species that roam in the national park, and that those animals have a right of way.

The Swiss tourist was critically injured in the accident on Sunday, and died at a hospital from his injuries on Wednesday.

“We are approaching the festive season in a month’s time and encourage visitors to plan their trips between gates and camps so as to eliminate the need to hurry, please also exercise caution as the wildlife has no concept of traffic rules,” Phaahla said.

The incident in South Africa happened days after another tourist from Australia was killed by an elephant while on a camping trip in Namibia.