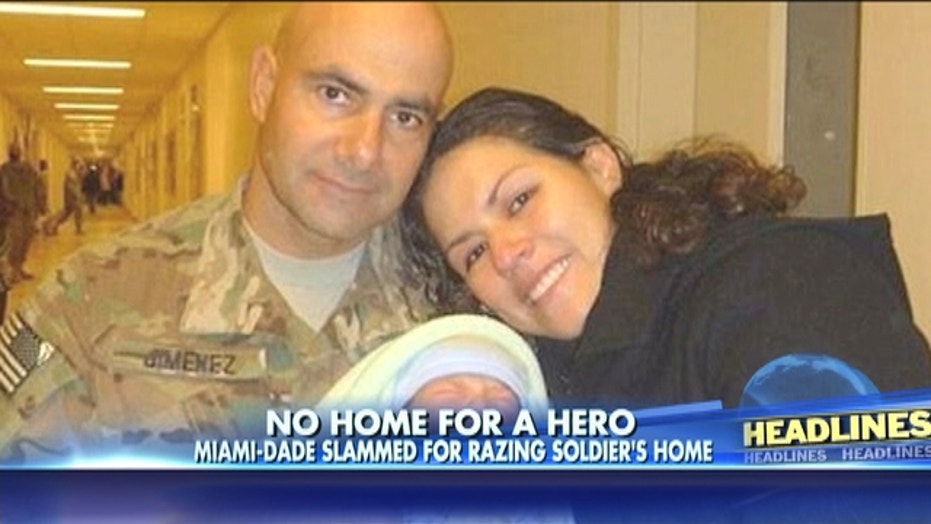 Soldier's home demolished while he was away

Army Staff Sergeant Jesus Jimenez home was demolished while he was away on training.

U.S. Army Staff Sgt. Jesus Jimenez fought two separate battles over the last seven years. He served one year in the Middle East as part of Operation Iraqi Freedom, and, while he was stationed overseas, he also fought Miami-Dade County in Florida to keep his home.

In 2011, while training for an upcoming deployment in California, his family home was torn down after county officials rejected a plea to delay demolition over home code violations.

Jimenez’s wife, kids, hearing-impaired brother and mother-in-law were able to get some personal items out before the 1947 house was razed.

“I didn’t think they would go and demolish it,” Jimenez told Fox News Latino from El Paso, Texas where he is currently stationed. “When the house came down, (the county) didn’t have a court order. It was spur-of-the-moment.”

The Jimenez family’s troubles with Miami-Dade County began in May 2007 when an inspector determined there were code violations in the house. Among the problems with the home that sparked the initial code citation were deteriorating porch beams, a deteriorated roof, a damaged door and an uncovered electrical junction box.

“I took down the list of things to do and asked if I would need permits for anything. (The inspector) said no,” Jimenez told FNL.

The soldier said he was getting ready to do the work, but more citations were issued against the home that made repair work unreasonable – especially since he was in the middle of preparing for a deployment.

“Everything they asked for was undoable,” Jimenez said. “It was bringing the house up to modern-day code or it will be demolished.”

Eventually the family hired an engineer to complete the work, but county officials said the problems were so extensive that it would be better to start from scratch.

“The intention was to demolish it anyways,” Jimenez said.

He accused county officials have making it a personal attack rather than being concerned about the actual safety of the house.

“It made no sense to me,” Jimenez said. “If I have to upgrade my house, my neighbors should be asked to upgrade their homes.”

County officials declined to comment on the case, citing ongoing litigation. But in court filings, Miami-Dade representatives said they had given Jimenez more than enough time – four years that included time in between deployments – to fix the violations in the home they deemed unsafe.

“It is my duty to remove individuals from structures which may cause a potential hazard to the safety and welfare of this family,” Miami-Dade Building Chief Charlie Danger wrote in November 2007, The Miami Herald reported. “This is why I cannot find a reasonable justification to allow the Jimenez family to continue to reside under these severe circumstances.”

Last week U.S. Judge Robert Scola Jr. ruled in favor of the father of four, saying the county should have delayed building-code violation proceedings against Jimenez while he was on duty oversees. He cited a World War II-era law, reinstated in 2003, that allows for the temporary suspension of legal or administrative proceedings that could affect active duty members’ civil rights.

The family’s attorney wants the city to drop all liens – including $13,713 in demolition costs – suspend all code-enforcement activities and pay $395,000 in 20 days. In exchange, the family would agree to sell the property where the house was demolished, as well as two other neighboring homes they own.

“I think (the judge’s ruling) is outstanding,” Jimenez said. “It’s great that we finally have come to a decision. I’m relieved.”