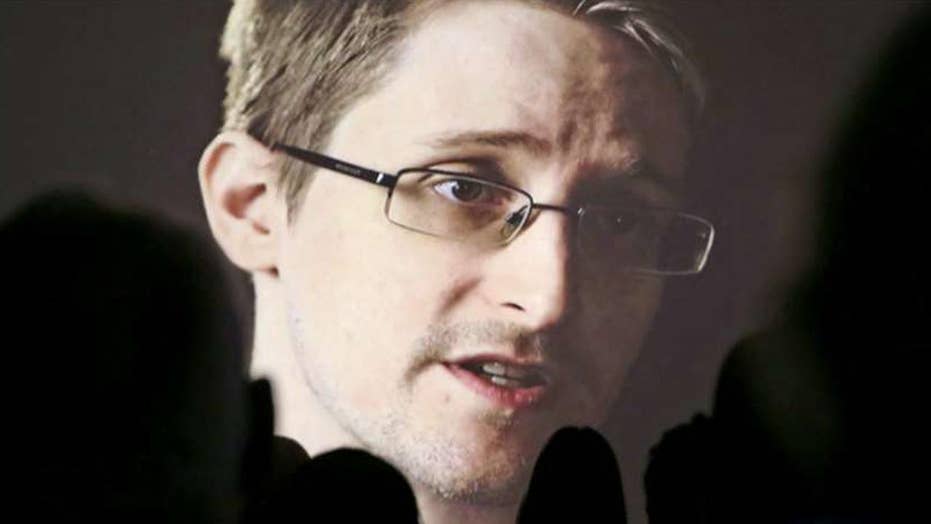 Corey Lewandowski: Snowden is the gift nobody wants

Edward Snowden, the former National Security contractor who leaked classified material in 2013, is using the report that Russia is considering handing him over to the U.S. as a "gift" as evidence that he is not a spy.

"Finally: irrefutable evidence that I never cooperated with Russian intel. No country trades away spies, as the rest would fear they’re next,” Snowden tweeted late Friday night.

Snowden linked his tweet to an NBC News report that claimed Russians are weighing a handover to "curry favor" with President Trump. The report cited an unnamed senior U.S. official who said he analyzed intelligence reports detailing the conversations.

'TUCKER CARLSON TONIGHT': SNOWDEN AND 'HOW AMERICA LOST ITS SECRETS

A government source told Fox News that Russia believes it has exhausted Snowden’s value and at this point he is more useful as a bargaining chip for Putin. The source could not speak to the concept of using Snowden as a “gift” to the U.S.

The Kremlin has long denied that Snowden was a spy. He was, however, granted asylum by Russia and is allowed to stay there for “a couple more years.”

Finally: irrefutable evidence that I never cooperated with Russian intel. No country trades away spies, as the rest would fear they're next. https://t.co/YONqZ1gYqm

Trump has not been shy in his opinion about Snowden.

“I said he was a spy and we should get him back. And if Russia respected our country, they would have sent him back immediately, but he was a spy. It didn’t take me a long time to figure that one out,” he said in a debate back in March.

Ben Wizner, the Snowden’s ACLU lawyer, told the network that he was unaware of any plans that would send Snowden back to the U.S.

The House intelligence committee recently released a bipartisan report to provide "a fuller account" of Snowden's crimes and the "reckless disregard he has shown for U.S. national security."

The 33-page unclassified report pointed to statements in June 2016 by the deputy chairman of the defense and security committee in the Russian parliament's upper house, who asserted that "Snowden did share intelligence" with the Russian government.

The report said, "Since Snowden's arrival in Moscow, he has had, and continues to have, contact with Russian intelligence services."

The following sentence was redacted, and there is nothing in the unclassified report that explains why the committee believes Snowden is still sharing intelligence with the Russians.

The committee's top Democrat, Rep. Adam Schiff of California, said Snowden isn't a whistleblower as he and his defenders claim.

"Most of the material he stole had nothing to do with Americans' privacy, and its compromise has been of great value to America's adversaries and those who mean to do America harm," Schiff said.

Wizner, Snowden's lawyer, dismissed the report and insisted that Snowden acted to inform the public.

Juan Zarate, a former deputy national security adviser, told NBC that  the Trump administration should be cautious in accepting Snowden from Russia as a sign of good will.

"It would signal warmer relations and some desire for greater cooperation with the new administration, but it would also no doubt stoke controversies and cases in the U.S. around the role of surveillance, the role of the U.S. intelligence community, and the future of privacy and civil liberties in an American context,” he said. "All of that would perhaps be music to the ears of Putin.