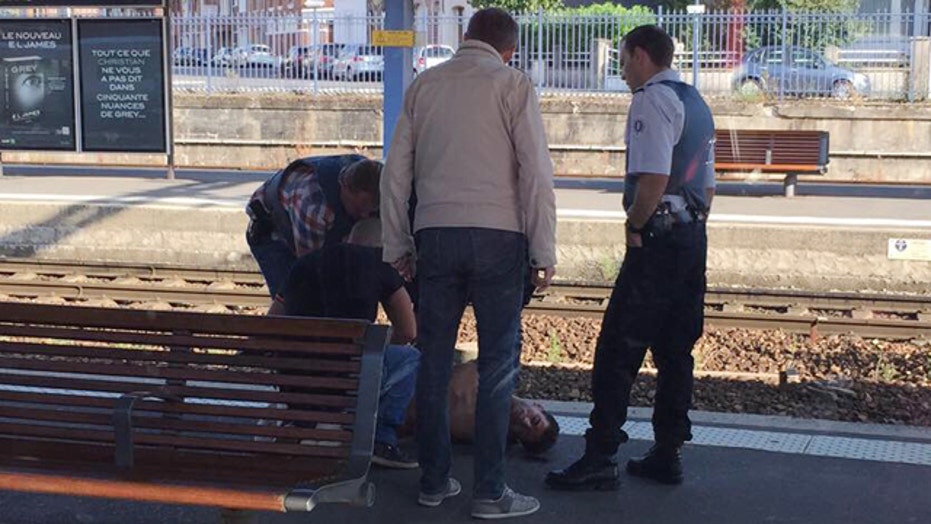 Was the thwarted France train attack part of a larger plot?

Belgian authorities have detained six people in connection with last year's foiled attack on a Thalys express train to France, they said Monday.

The Federal Prosecutor's Office said six houses in the greater Brussels area were searched in the operation. An investigating judge would decide later in the day whether the people taken in for questioning should remain in custody, it said.

No arms or explosives were found and the prosecutor's office said no further information would be made public about the six people detained or the items seized in the police searches.

In August 2015, a man on a Thalys train that had just crossed into France from Belgium tried to open fire with an assault rifle but was overpowered by three Americans, two of them off-duty members of the U.S. armed forces. French police termed it an Islamic extremist attack, but the gunman, Ayoub El Khazzani, maintained he wanted to commit robbery.

French authorities have linked El Khazzani to Abdelhamid Abaaoud, the ringleader of the Islamic State cell that attacked Paris and Brussels.

Brussels was on high alert Monday with increased security after another police sweep over the weekend that left three in jail facing terrorism charges, including relatives of two of the suicide attackers who struck Brussels targets on March 22.

The MIVB metro system said a half-dozen subway stations had reduced entry on request from authorities, but all subway lines in the Belgian capital were running during the morning rush hour.

On Saturday, authorities charged three men with terror-related crimes after raids and the detention of 40 people in a major investigation. Authorities said the probe required "immediate intervention" because they feared a new attack was close.

Among those arrested were relatives of the El-Bakraoui brothers, who were among the suicide bombers in the March attacks.

"We know that radicalism, violent extremism, is in a small minority of the Muslim community and it targets families," Interior Minister Jan Jambon said in an interview with RTBF radio, responding to a question about the family ties among those arrested. He declined to elaborate beyond saying that "it makes it easier to follow them, because we know where the links are."

Prime Minister Charles Michel said the nation would remain "extremely vigilant, hour by hour," and that the terror level across the country would remain at the second-highest level, meaning a threat of an attack "is possible and likely."