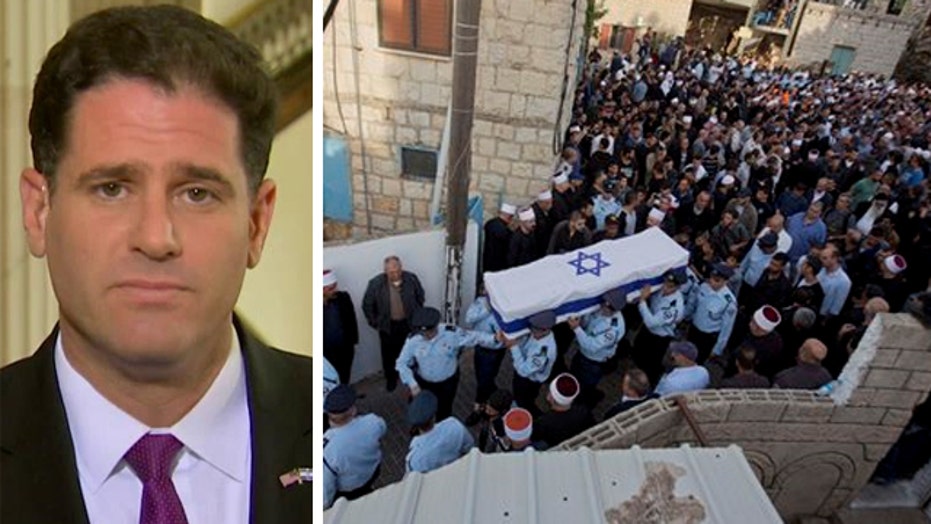 The hits keep coming in Israel, on the streets as well as the airwaves -- where yet another twisted tune from Palestinians praises the so-called "car intifada," in which Muslim radicals purposely drive into crowds of Israelis.

"Zionist run away, run away Zionist," go the lyrics to the latest song, which is accompanied by a chilling animated video and was first reported in The Jerusalem Post. "You are about to be killed by a car."

The song comes on the heels of another, similarly-themed tune called "Run Over the Settler," which also praises the disturbing trend that began on Oct. 22, when a Palestinian named Abd Al-Rahman Al-Shaloudi slammed his car into a crowded train station in Jerusalem in an apparently intentional act that killed a 3-month-old Israeli-American baby and an Ecuadorean woman in her 20s. It also comes as Israelis reel from a horrific attack Tuesday in a Jerusalem synagogue in which a pair of Palestinian cousins armed with meat cleavers and a gun slaughtered five people as they worshipped, in an incident that was widely celebrated in Palestinian territories.

The car attacks, coupled with random stabbings that have occurred with frightening frequency in recent weeks, have sparked fears of a new “intifada,” or uprising, in Israel. But in the Palestinian territories of Gaza and the West Bank, the attacks are being glorified in song, and in the words of leaders.

“Run them over, burn the next in line,” goes the song, sung by Anas Garadat and Muhammad Abu Al-Kayed and translated by Palestinian Media Watch. “Don't leave a single settler. Wait for them at the intersection. Let the settler drown in red blood.”

Earlier this month, Palestinian and known Hamas operative Ibrahim Al-Akari rammed a van into a group of pedestrians in Jerusalem, killing a police officer, and on Monday morning, two terrorist attacks occurred hours away from one another. In the first incident, an Israeli soldier died when he was stabbed close to a central Tel Aviv train station. The attacker in the second incident, at a traffic junction in the West Bank, stabbed three people, killing a 26-year-old woman. The victim, Dalia Lemkus, had survived a previous unprovoked stabbing attack at a similar location back in 2006.

In the earlier song, the apparently accidental death of a 2-month-old Palestinian girl is used as justification for the intentional attacks. In that case, the Israeli driver reportedly even called for an ambulance for the stricken child and her brother.

“Extra police units have been mobilized in different areas with the emphasis on Judea and Samaria [the West Bank], Jerusalem and Tel Aviv, following yesterday’s attack there,” Rosenfeld told FoxNews.com. “We have also stepped up Border Police operations around Palestinian areas such as Nablus, Bethlehem, and Hebron, and there is increased security being implemented on a ground level, including regular patrols and road blocks.”

But stopping Palestinian terrorists from suddenly veering onto sidewalks and striking with easily concealed knives is a daunting task, Rosenfeld acknowledged.

“We’re working both on an intelligence level and an operational level,” Rosenfeld said. “The intelligence level consists of finding potential suspects before they manage to reach the streets, and on an operational level we have larger numbers of undercover officers in public places ahead of time, that can immediately respond and react when necessary.”

He also confirmed that despite the violence of the last few weeks, regular co-operation is continuing between Israeli and Palestinian police.

Not so with Palestinian media and cultural institutions, however. Local newspapers and television programs have used cartoon images to laud the killings, adding fuel to an already combustible situation.

Last week, the Hamas-supported Al Quds University in Jerusalem proudly unveiled an exhibit glorifying Mutaz Hijazi, who attempted to assassinate the controversial Rabbi Yehuda Glick at the Begin Center in Jerusalem on Oct. 29.

Glick, who was shot four times at close range, had been in the forefront of calls for Jews to be allowed to pray freely on the Temple Mount, site of the Golden Dome and Al Aqsa Mosque, and previously of the Second Jewish Temple. Their demands, supported by only a handful of extreme right-wing politicians who have been subjected to heavy criticism in the Israeli media for inflaming religious tensions, seek to change the status quo at the religious site that has existed since Israel gained control of Jerusalem in 1967.

Glick is recovering from his injuries, but Hijazi, a long-standing member of Islamic Jihad, was tracked down by Israeli security services and killed. He is being hailed as a heroic martyr by Palestinian media and by some Palestinian politicians who, in contrast to their Israeli counterparts, appear to be doing little publicly to ease the spiraling situation.

But while Israeli leaders have called for Glick to stifle demands to pray at the sacred site, Palestinian leaders continue to praise violent terrorists. A spokesman for Palestinian Authority President Mahmoud Abbas recently referred to terrorist killers as “heroic martyrs... saturating the land of the homeland with their pure blood and igniting the flames of rage.”