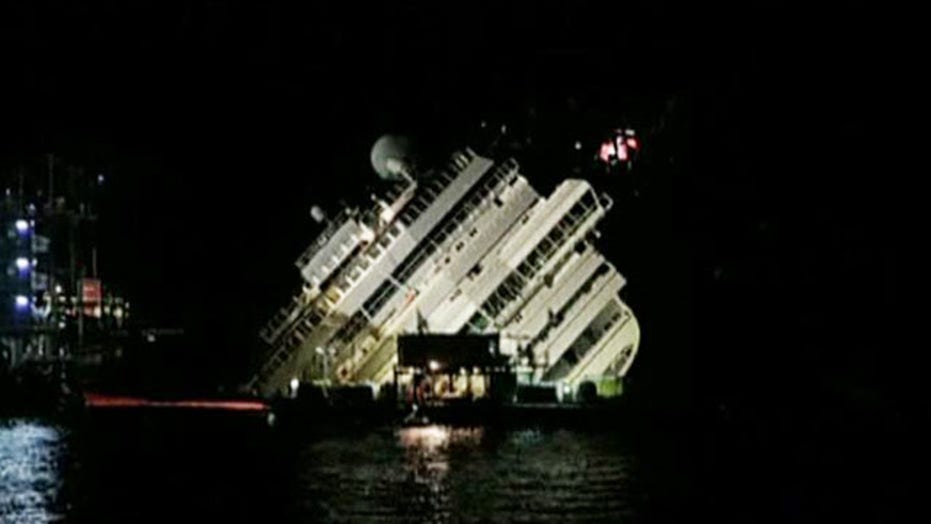 GIGLIO ISLAND, Italy – Engineers declared success on Tuesday as the Costa Concordia cruise ship was pulled completely upright during an unprecedented, 19-hour operation to wrench it from its side where it capsized last year off Tuscany.

The remarkable maritime salvage project now allows for a renewed search for the two bodies that were never recovered from the 32 people killed in the shipwreck, and for the ship to eventually be towed away.

Nick Sloane, the South African chief salvage master, received a hero's welcome after he came ashore from the floating barge that served as the command and control room for the operation. At one point he had a phalanx of Carabineri police serving as bodyguards to keep television crews from mobbing him.

"She was heavier than I expected," Sloane told reporters after getting a few hours of sleep. "But you have to be patient. You can't do it with a stopwatch."

The Concordia's submerged side suffered significant damage during the 20 months it bore the weight of the massive, 300-meter long (1,000-foot long) ship on the jagged reef. The daylong operation to right it stressed that flank as well. Exterior balconies were mangled and entire sections looked warped, though officials said the damage probably looked worse than it really was.

The damage must be repaired to stabilize the ship so it can withstand the coming winter, when seas and winds will whip the luxury liner, which is to be towed and turned into scrap sometime in 2014.

Shortly after 4 a.m., a foghorn boomed off Giglio Island and the head of Italy's Civil Protection agency, Franco Gabrielli, announced that the ship had reached vertical and that the operation to rotate it -- known as parbuckling -- was complete. It was a dramatic operation that unfolded in real time as TV cameras recorded the final hours when the rotation accelerated, with gravity pulling the ship into place.

"We completed the parbuckling operation a few minutes ago the way we thought it would happen and the way we hoped it would happen," said Franco Porcellacchia, project manager for the Concordia's owner, Costa Crociere SpA.

"A perfect operation, I must say," with no environmental spill detected so far, he said.

For Italy, it was a moment of pride after the horror and embarrassment of the Jan. 13, 2012, collision. The Concordia slammed into a reef off Giglio Island after it came too close to shore in an apparent stunt. Capt. Francesco Schettino earned the public's contempt when he abandoned the ship before everyone was evacuated, and then refused coast guard orders to go back on board. He is now on trial.

The Concordia drifted, listed and capsized just off the island's port. Now that the ship is upright, a new attempt can be made to locate the two missing bodies aboard the ship, though Gabrielli stressed that the wreckage must be secured again before divers and other recovery crews can go in.

"We hope that will happen in the next few days," he said.

With the ship is upright and about two-thirds submerged, a search can also be conducted cabin to cabin to open the safes and return valuables to their rightful owners, officials said.

Premier Enrico Letta phoned Gabrielli to congratulate him and thanked him in person at a ceremony in Rome on Tuesday afternoon at the government palace.

"Things went well, exactly as it was hoped they would, but what counts is the concept of assuming responsibility," Letta told Gabrielli. He said the success would help "turn the page" of Italy's reputation internationally.

Sloane said the most critical moment of the operation came at the beginning, when the Concordia failed to dislodge itself from the reef embedded in its starboard side even after some 6,000 tons of force was applied.

The operation had been expected to take no more than 12 hours, but dragged on after an initial weather delay and emergency maintenance on the system of steel cables, pulleys and counterweights that were used to roll the 115,000-ton, half-submerged carcass of steel upright. But Sloane said there were no errors, even if there were some tense moments -- "alarms started to ring" -- when the ship didn't immediately settle onto the artificial seabed platforms made to support the flat keel. Once it settled, the control room announced to all the vessels involved in the operation that it was completed successfully.

Parbuckling is a standard operation to right capsized ships but never before had it been used on such a huge cruise liner.

Sloane said an initial inspection of the starboard side, covered in brown slime from its 20 months under water, indicated serious damage that must be assessed and fixed in the coming months. But Sloane seemed confident: "She was strong enough to come up like this, she's strong enough to be towed."

The starboard side of the ship, which was raised 65 degrees in the operation, must be stabilized to enable crews to attach empty tanks on the side that will later be used to help float the vessel away.  Such tanks were affixed to the exposed port side of the ship and were filled with water to help pull the port side down.

After receiving cheers, embraces and a kiss from his wife on shore, Sloane said he wanted to get some sleep, a beer "and maybe a barbeque tomorrow."

"I think the whole team is proud of what they achieved," he said as he was mobbed by well-wishers and television crews, still wearing an orange life vest and carrying a South African flag that was handed to him by his wife.

About an hour before the rotation was complete, observers said the ship seemed to suddenly settle down upon its new perch, with a clear brown-green line of algae drawn across its front delineating the half of the liner that had been underwater.

Mayor Sergio Ortelli said the island felt a wave of relief as soon as the Concordia was freed. But he said there was also the realization that two bodies still have yet to be found.

"While there is happiness today, there is no triumphalism," he told The Associated Press.

The Concordia's captain is on trial for alleged manslaughter, causing a shipwreck and abandoning the ship during the chaotic and delayed evacuation. Schettino claims the reef wasn't on the nautical charts for the liner's weeklong Mediterranean cruise. Five other Costa employees were convicted of manslaughter in a plea bargain and were sentenced to less than three years apiece.

Costa is a division of Miami-based Carnival Corp., the world's largest cruise company.