Analysis from Nile Gardiner, the Heritage Foundation's director of the Margaret Thatcher Center for Freedom.

Japanese Prime Minister Shinzo Abe landed in Iran on Wednesday on a mission to ease tensions between Washington and Tehran, just hours after Iranian-backed rebels in Yemen fired a missile at Saudi airport.

Abe, who is close to President Trump and hosted him last month, is attempting to de-escalate the months-long heightened tensions between the two countries, which has included attacks on oil tankers suspected of being carried out by Iran, as well as alleged threats to Americans in Iraq by Iranian proxies.

“There are concerns over rising tension in the Middle East region,” Abe he said before departing for Iran. “Japan wants to do as much as possible towards peace and stability in the region.”

“There are concerns over rising tension in the Middle East region. Japan wants to do as much as possible towards peace and stability in the region.”

IRAN NEWSPAPER TO JAPAN: 'HOW CAN YOU TRUST A WAR CRIMINAL?'

Yet the visit coincided with a scathing attack on the U.S. in the Iranian media and the Houthi rebel attack on Saudi Arabia’s Abha regional airport that reportedly wounded 26 people.

The front page of the Iranian daily Farheekhtegan, meanwhile, published Wednesday morning a picture of a mushroom cloud from a nuclear blast, referring to the U.S. bombing of Hiroshima and Nagasaki at the end of World War II and asked: “How Can You Trust A War Criminal, Mr. Abe?” 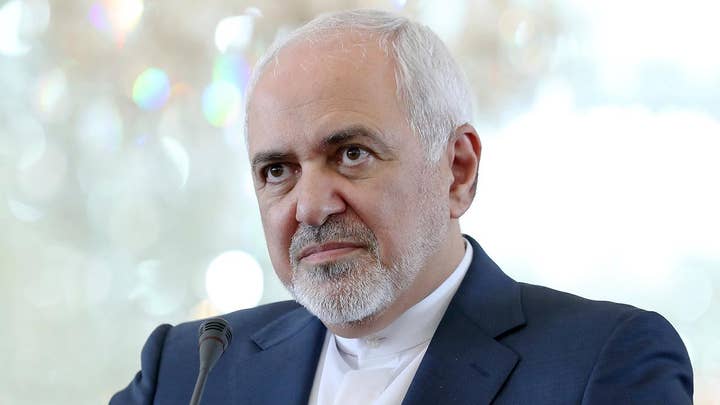 While no people died in the missile attack on the airport, this appears to be the largest number of civilians to be injured in Saudi Arabia by an attack by the rebels since the beginning of the Saudi-led war in Yemen over four years ago.

The rebels’ news channel Al-Masirah said the missile hit the intended target and halted air traffic at the airport. Saudi Arabia has been criticized for constant airstrikes against the Arab world’s poorest country, leading to the deaths of tens of thousands.

Mohammed Abdel-Salam, A Houthi spokesman, said Wednesday’s attack was in response to Saudi Arabia’s “continued aggression and blockade on Yemen.” He said earlier this week that attacks on Saudi airports are an effective strategy to combat the blockade of the airport in Yemen’s capital, Sanaa, which the Houthis overran in 2014.

In the midst of the proxy war, Iran has warned that it will resume enriching uranium closer to weapons-grade level on July 7 if European allies fail to offer new terms for the nuclear deal.

The U.S., meanwhile, blames Iran for a mysterious attack on oil tankers off the coast of the United Arab Emirates and sent an aircraft carrier and B-52 bombers to the region, along with hundreds more troops to back up the tens of thousands already deployed in the region.

Amid intelligence reports suggesting that Iran-backed militias moved rockets closer to American bases, the U.S. also ordered all non-essential personnel to leave the U.S. Embassy and consulate in Iraq.