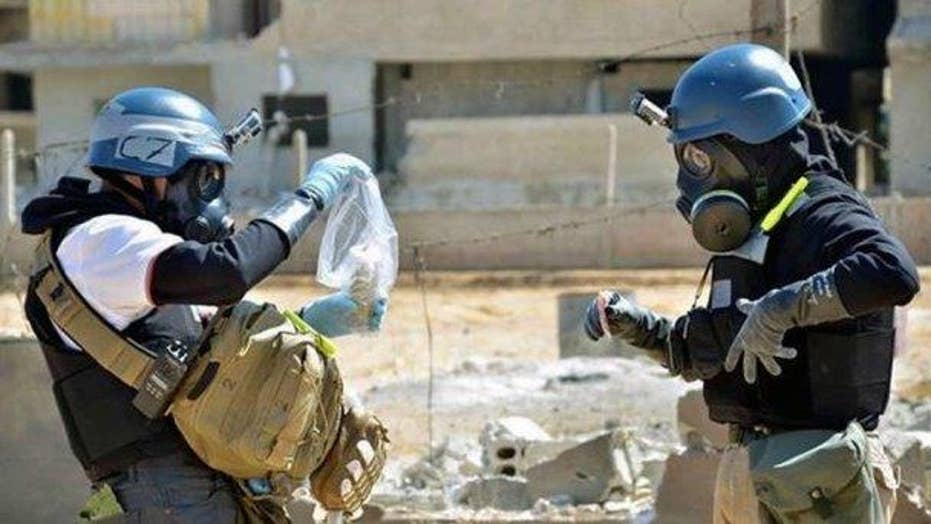 A suicide attacker driving a truck packed with explosives barreled through Syria's border with Jordan on Tuesday, setting off a blast that killed six members of the Jordanian security forces and wounded 14.

King Abdullah II said Jordan will "respond with any iron fist" against anyone harming its borders or security, but did not lay out specifics.

Government spokesman Mohammed Momani said Jordan is sealing the border area for the time being, leaving it unclear how international aid will reach some 64,000 Syrian refugees stranded on the other side.

It was the deadliest attack along the tense border in recent memory and raised new concerns about the pro-Western kingdom's vulnerability to spillover from long-running conflicts in neighboring Syria and Iraq.

There was no immediate claim of responsibility for the assault, the third against Jordanian security installations in seven months. The previous two attacks had targeted security compounds inside Jordan.

Jordan does not yet know who is behind the attack, Momani said.

The military said Tuesday's explosion went off at 5:30 a.m. (0230 GMT) near an encampment for tens of thousands of Syrian refugees who are stranded in a remote area on the border and await entry into Jordan. The attack targeted a military post serving Syrian refugees in an area known as Ruqban, the army said.

"It was a suicide attack," Momani told reporters. "It was a truck driven in a very fast speed, and it reached our side of the border and it ended up exploding with the driver inside."

He said Jordan decided to "close that crossing area and consider this area a closed military zone."

A Ruqban resident said that sometime after 5 a.m., he saw a pickup truck speeding toward a Jordanian border gate and crashing through it. Seconds later, a blast went off, followed by the sound of shooting, said the resident, who spoke to The Associated Press over the phone from the area. He spoke on condition of anonymity for fear of repercussions from the authorities.

Cellphone photos from the camp show a cloud of gray smoke rising in the distance, with tents in the foreground.

Ruqban and the smaller Hadalat camp house about 64,000 Syrians, according to estimates by international aid agencies. Both camps are located near an earthen mound, or berm, that runs along the border. Ruqban is just a few miles from the point where Syria, Jordan and Iraq meet.

Ariane Rummery, a spokeswoman for the U.N. refugee agency in Geneva, said the attack "underlines how challenging the relief operation is at the berm."

She said the U.N. agency is "concerned about the level of security issues at the berm and for humanitarian agencies working there."

Several aid groups, including the World Food Program, said they were not able to reach distribution points near the berm Tuesday.

With crowds at the berm swelling rapidly in recent weeks, the situation for refugees in the two encampments has become increasingly dire.

Jordanian officials have said they have evidence that Islamic State militants have infiltrated the two camps and are attempting to slip into Jordan, pretending to be refugees.

For months, Jordan has "been warning the international community and everybody of the increased number of people on the other side of the border," Momani said Tuesday. "We have strong evidence of the presence of terrorist elements and Daesh elements ... and today is clear proof of that." Daesh is an Arabic acronym for the Islamic State group.

Jordan is a member of the U.S.-led military coalition fighting to drive IS out of the areas it controls in Syria and Iraq. Jordan has fortified border defenses, including with U.S.-funded surveillance systems, to try to stop attackers and infiltrators.

Jordan has also widened a crackdown on IS sympathizers at home, jailing hundreds in the past two years for promoting the group's ideas on social media.

Jordanian security installations were targeted twice before in the past seven months.

In November, a Jordanian police captain opened fire on instructors at an international police training center in the capital, Amman, killing five people, including two Americans, before being shot dead by security forces.

Two weeks ago, a gunman armed with an assault rifle killed five people in an office of Jordan's intelligence agency. The assailant, said to have previous ties to Islamic militant groups, was arrested several hours later. The government said he was a lone wolf and imposed a gag order, preventing further reporting.

Jordanian officials have played down concerns that militant groups, including IS, pose an external and internal threat to the kingdom, seen as a crucial ally by the West in combating extremism.