Carvan members hoping to board 'Beast' cargo train to border

Train through Mexico would cut trip time to U.S. in half; William La Jeunesse reports from alongside the migrants in Villa Comaltitlan, Mexico.

A second migrant caravan is forming at the Honduran border and is expected to follow the larger caravan of more than 7,000 from Central America towards the U.S.-Mexico border, The Wall Street Journal reported on Tuesday.

The remaining migrants in the first group are about 1,100 miles from the border town of Reynosa, which is across from McAllen, Texas, the paper reported.

Guatemalan authorities on Sunday estimated the new group -- which gathered in a Guatemalan city near the border of Honduras -- to be at 1,000. But the group appears to be growing. The Journal, citing estimates from church-run charities and activists, reported that the group is now made up of about 2,500. By Monday evening the group had entered the eastern Guatemalan town of Chiquimula.

The new caravan reportedly plans to follow in the footsteps of the larger group, who passed through the southern Mexico border over the weekend. The group is believed to have begun its journey in San Pedro Sula, where the first caravan began with less than 200 participants.

CARAVAN OF MIGRANTS GROWS AHEAD OF PUSH INTO MEXICO

"We know this won't end in a few days and will be a long progress of migration," said a migrant shelter worker in Guatemala City, cited by Reuters.

The vast majority of the migrants are from Honduras are escaping crime and extreme poverty. Activists say migrants opt to travel in large numbers to avoid the dangers of crime and human traffickers. 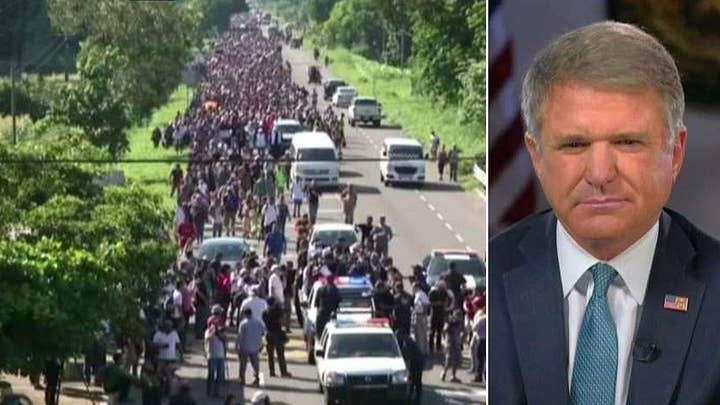 President Trump told USA Today in an interview that "people from the Middle East” are among the thousands of migrants in the caravan, echoing remarks he made on Twitter Monday morning when he complained there were MS-13 gang "criminals and unknown Middle Easterners mixed in."

A spokesman from the Department of Homeland Security on Tuesday said the agency could confirm that there are individuals in the caravan who are gang members or have significant criminal histories. The spokesman also confirmed Trump’s claim that some are citizens from outside Central America, like the Middle East.

Trump has declared the first migrant caravan a "national emergency" and has threatened to cut millions in aid to El Salvador, Guatemala, and Honduras for their inability to stop migrants from "coming illegally to the U.S."

The three countries combined received more than $500 million in funding from the U.S. in the fiscal year 2017.

The report of the caravan comes on the heels of a surge in apprehensions of families at the southern border, which has given Trump a fresh talking point to rally his base ahead of next month's midterm elections.

Nearly a third of all people apprehended at the U.S.-Mexico border during the budget year 2018 were families and children — about 157,248 out of 395,579 total apprehensions.