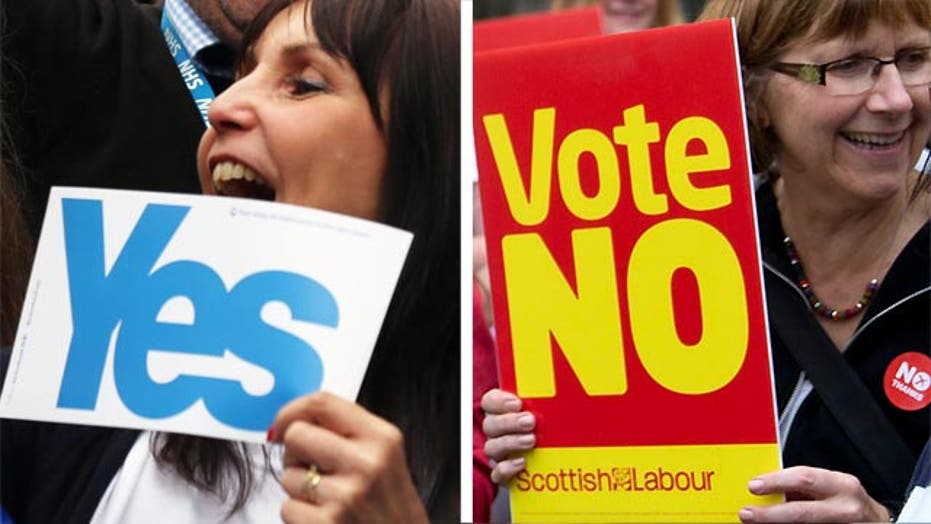 Scotland to vote on independence from United Kingdom

What is at stake?

EDINBURGH, Scotland – Voters in Scotland turned out in unprecedented numbers for an independence referendum and early results Friday suggested they wanted to keep Scotland's 307-year union with England.

With 26 of 32 regional electoral centers reporting, the No side had about 54 percent of the vote to 46 percent for the Yes side. Those against independence also scored a big win by strongly taking Aberdeen, Scotland's oil capital.

The average turnout was 86 percent — a record high.

Scottish Conservative leader Ruth Davidson told the BBC she was confident the "silent majority" of Scots would deliver a No victory.

After the polls closed late Thursday, a nationwide count began immediately. Many Scots stayed up overnight in homes and bars, awaiting the result.

"Why not roll the dice for once?" Yes supporter Thomas Roberts said at one Edinburgh polling station. "I'm going to sit with a beer in my hand watching the results coming in."

At Highland Hall outside of Edinburgh, where the final result will be announced later Friday, vote-counters at dozens of tables sorted through paper ballots, watched keenly by monitors from the Yes and No camps.

Eager voters had lined up outside some polling stations even before they opened Thursday. More than 4.2 million people had registered to vote — 97 percent of those eligible — including residents as young as 16.

For some, it was a day they had dreamed of for decades. For others, the time had finally come to make up their minds about the future — both for themselves and for the United Kingdom.

"Fifty years I fought for this," said 83-year-old Isabelle Smith, a Yes supporter in Edinburgh's maritime district of Newhaven, a former fishing port. "And we are going to win. I can feel it in my bones."

But financial consultant Michael MacPhee, a No voter, said he would observe the returns "with anxiety."

Scottish independence is "the daftest idea I've ever heard," he said.

After polls closed, some No campaigners said they were confident they had swayed enough undecided voters to stave off independence. They may have been helped by a last-minute offer from Britain's main political parties to give Scotland more powers if voters reject secession, and by fears about the future of Britain's pensions and the National Health Service in an independent Scotland.

British Prime Minister David Cameron was to make a televised address about Britain's future Friday morning after the result was announced.

The question on the ballot could not be simpler: "Should Scotland be an independent country?"

Yet it divided Scots during months of campaigning, generating an unprecedented volume and intensity of public debate and participation. The Yes side, in particular, energized young people and previously disillusioned working-class voters.

Many questions — the currency an independent Scotland would use, its status within the 28-nation European Union and NATO, the fate of Britain's nuclear-armed submarines, based at a Scottish port — remained uncertain or disputed after months of campaigning.

One thing was known: A Yes vote would trigger 18 months of negotiations between Scottish leaders and London-based politicians on how the two countries would separate their institutions before Scotland's planned Independence Day on March 24, 2016.