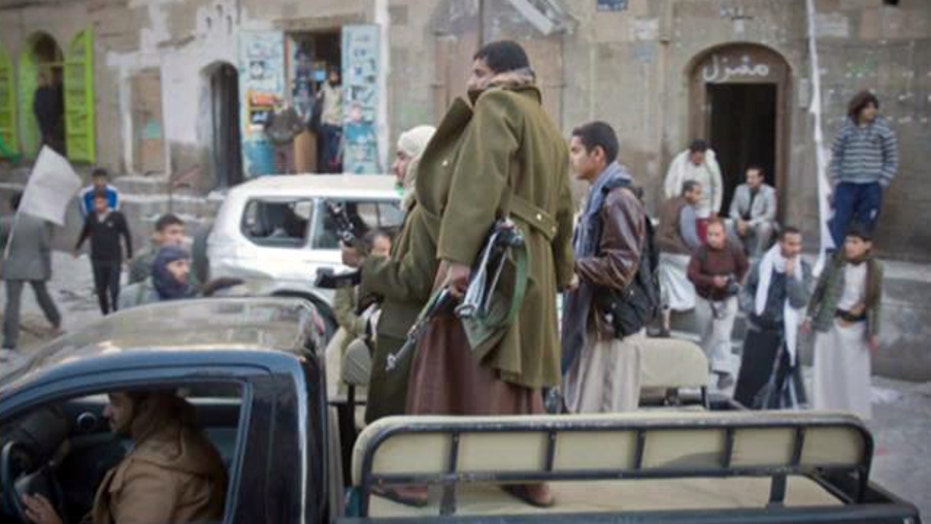 Chaos in Yemen: Veteran reporter shares view from the ground

SANAA, Yemen – Saudi Arabia bombed the northern stronghold of Yemen's Shiite rebels and key military installations on Friday, the second day of a campaign that military officials said was aimed at neutralizing air defenses ahead of a possible ground invasion.

The intervention that began early Thursday is aimed at halting the advance of the Iran-backed rebels, known as Houthis, who have allied with a powerful former president and seized the capital and several provinces.

The airstrikes have struck at least six provinces, including one rich in oil and gas, and opened a new front in the regional rivalry between Riyadh and Tehran. Yemeni President Abed Rabbo Mansour Hadi, a close U.S. ally, has fled the country, and the turmoil could bolster a powerful local Al Qaeda affiliate as well as militants inspired by the Islamic State group.

The airstrikes have destroyed nearly 40 percent of Yemen's air defenses, including radar installations, according to Yemeni Brig. Gen. Saleh al-Subaihi. The strikes have also hindered the ability of the Houthis and military units loyal to former President Ali Abdullah Saleh to send reinforcements to the main front in the south, he said.

Retired army officer Nasser al-Marqashi said he expects the airstrikes to continue for a week to weaken the air defenses before a ground offensive, which would likely be launched from the port city of Aden, former capital of the once-independent south, or the country's sparsely populated far east. Hadi has supporters in both areas.

Three Egyptian security officials, who spoke on condition of anonymity because they were not authorized to discuss future operations with the press, said troops would invade from Saudi Arabia and land on Yemen's coast.

The airstrikes early Friday targeted Saada, the northern stronghold of the Houthis, and were aimed at locations where rebel leader Abdul-Malek al-Houthi might be, military officials said. The grave of his brother Hussein al-Houthi, founder of the rebel group, was demolished in the strikes.

Saudi warplanes also bombed the al-Sana army camp northeast of Sanaa, run by commanders loyal to Saleh. An autocrat who ruled Yemen for more than 30 years until he stepped down following a 2011 Arab Spring uprising, Saleh enjoys the loyalty of some of the country's strongest military units, who now fight alongside the Houthis.

The officials said other strikes targeted army camps outside Sanaa in al-Dhale and Lahj provinces, including al-Annad base, where about 100 U.S. military advisers had been based but were forced to withdraw last weekend due to deteriorating security conditions.

In oil and gas-rich Marib, strikes destroyed radar that the rebels could use to track Saudi warplanes.

In Dhamar and Taiz -- two areas overrun by the rebels -- thousands of demonstrators staged protests in support of the Saudi airstrikes.

In the capital Sanaa, heavy airstrikes came in waves overnight. Explosions rocked the city and anti-aircraft guns were heard returning fire. At least 18 civilians, including six children, have been killed and the casualty count was expected to rise.

Saudi Arabia and fellow Sunni-led allies in the Gulf and the Middle East view the Houthi takeover as an attempt by Iran to establish a proxy on the kingdom's southern border. Iran and the Houthis deny that Tehran arms the rebel movement, though it says it provides diplomatic and humanitarian support.

Yemeni Foreign Minister Riad Yassin told Saudi-owned Al-Arabiya TV that the offensive is also meant to stop outside supplies coming from Iran. "We have a lot of evidence that there is a group from the Iranian Revolutionary Guard and foreign experts" heading to Sanaa, he said. The Houthis have denied such allegations in the past.

Iranian Foreign Minister Mohammed Javad Zarif said in a statement Friday that Tehran was "ready to cooperate with its brothers in the region, to make it easier for different groups in Yemen to have dialogue to protect the (country's) integrity and facilitate restoration of stability."

The comment came after Turkish President Recep Tayyip Erdogan said in an interview that his country could provide logistical support for the Saudi-led military operation. Zarif said Iran respects its strategic relations with Turkey.

In the air assault, codenamed "Operation Decisive Storm," Saudi Arabia deployed some 100 fighter jets, 150,000 soldiers and other navy units, Al-Arabiya reported. Also involved were aircraft from the United Arab Emirates, Bahrain, Qatar, Kuwait, Jordan, Morocco, Sudan and Egypt, though it was not clear which carried out the actual strikes.

On Friday, Egypt's President Abdel Fattah el-Sissi reiterated Cairo's commitment to Gulf security in a phone call with Saudi King Salman, saying "the security of the Gulf is a red line and part and parcel of Egyptian national security," according to presidential spokesman Alaa Youssef.

Yassin, the Yemeni foreign minister, said Egyptian naval forces are heading toward the Bab al-Mandab strait, the narrow opening to the Red Sea.

A high-level delegation from Pakistan was traveling to Saudi Arabia on Friday to hold talks on Yemen, following a meeting in Pakistan chaired by Prime Minister Nawaz Sharif to assess the situation.

"If the sovereignty or territorial integrity of Saudi Arabia is threatened, Pakistan will defend it," Pakistani Defense Minister Khawaja Muhammad Asif told parliament in remarks carried live on state-run television. He said there had been no decision to take part in the Yemeni conflict.

According to defense officials in Washington, the U.S. is providing refueling tankers and surveillance flights for the Saudi operations, and there are several U.S. troops working in the operations center. The White House said the U.S. was not taking direct military action.

Al-Houthi, the leader of the rebels, has accused the United States, Saudi Arabia and Israel of launching a "criminal, unjust, brutal and sinful" campaign aimed at invading and occupying Yemen.

"Yemenis won't accept such humiliation," he said in a televised speech Thursday night, calling the Saudis "stupid" and "evil."

President Hadi fled the country by boat on Wednesday and arrived in Riyadh the following day after transiting through Oman. He was expected to attend a meeting of Arab leaders this weekend in the Egyptian resort town of Sharm el-Sheikh.

Brig. Gen. Ahmed Asiri, the spokesman for Operation Decisive Storm, denied that a ground assault was part of the current operation but said the coalition was ready "to deter any aggression of any kind."

He told reporters in Saudi Arabia on Thursday that the airstrikes were destroying Houthi air defense systems and targeting bases, on-the-ground aircraft and ballistic missiles. Within the first 15 minutes of airstrikes, the Saudis had "complete control on the skies of Yemen," he said.

Each air sortie was led by Saudi warplanes and included several other support aircraft with teams for refueling, early warning, reconnaissance and search and rescue.