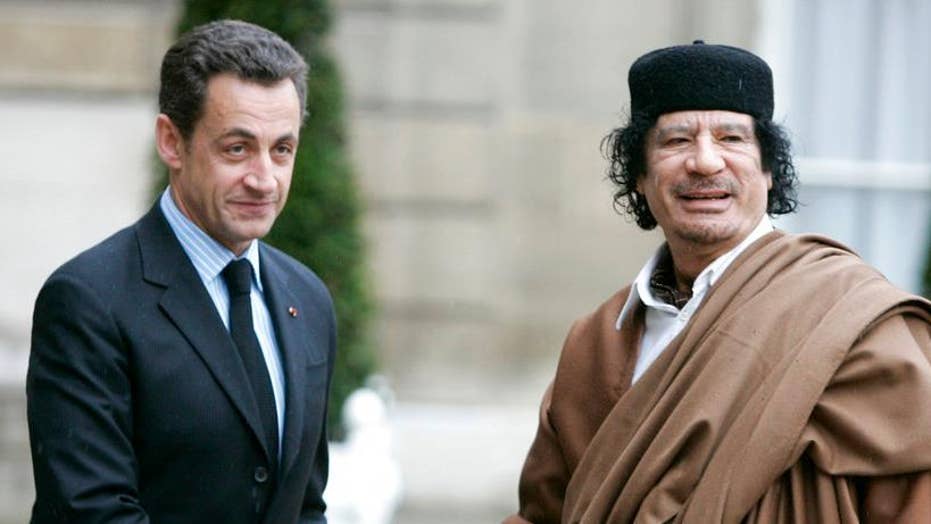 The charges reportedly include illicit funding of a campaign, receiving money from Libyan embezzlement, and passive corruption.

Sarkozy, 63, was in custody Tuesday but was freed on bail Wednesday following days of questioning. It remained unclear if he can travel outside France.

He denied any wrongdoing and said his Libyan accusers were seeking revenge on him for his decision to send warplanes during the uprising in 2011 that led to Gadhafi's downfall and death, the BBC reported.

Investigators are looking into whether the former president secretly accepted $61.6 million in total for his 2007 campaign from the late Libyan dictator. The figure is more than twice the allowed funding for a campaign at the time.

The payments would also violate the country’s rules against foreign financing.

The investigation into the alleged dealings with the Libyans began in 2013, but gained steam in 2016 when Lebanese businessman Ziad Takieddine told Mediapart that he gave suitcases containing $6.2 million in cash to Sarkozy and his former chief of staff Claude Gueant.

The allegations were reportedly corroborated by Bashir Saleh, who ran Libya’s sovereign wealth fund at the time, according to French daily Le Monde.

Guéant denied the allegations, telling French media Tuesday that he had "never seen a penny of Libyan financing,” according to the BBC.

A former Sarkozy aide, Alexandre Djouhri, is currently fighting extradition to France after his arrest in London earlier this year on suspicion of money laundering as part of the case, the broadcaster reported.

A number of Sarkozy’s political opponents have jumped on the issue, demanding answers about the allegations.

Ségolène Royal, who ran against Sarkozy in 2007, said in a tweet that the election result may have been swayed to her opponent because of illegal funds. “Millions of citizens have the right to know if (we) were on an equal footing,” she said, according to the Times of London.

Marine Le Pen, leader of France's right-wing National Front, said the money could have influenced Sarkozy’s decision in 2011 to join military intervention against the Gadhafi regime.

“We are talking about a war which was decided about the elimination of a head of state, about the destabilization of a country and about the wave of migration that has followed,” said Le Pen, according to the paper.

“The judges must complete their inquiries and not allow themselves to be manipulated. They must give their decision with great seriousness because it could have particularly important consequences, notably at an international level.”

If found guilty, Sarkozy could get up to 10 years behind bars, although many are skeptical that a former president could be imprisoned and he much more likely would be given a fine.