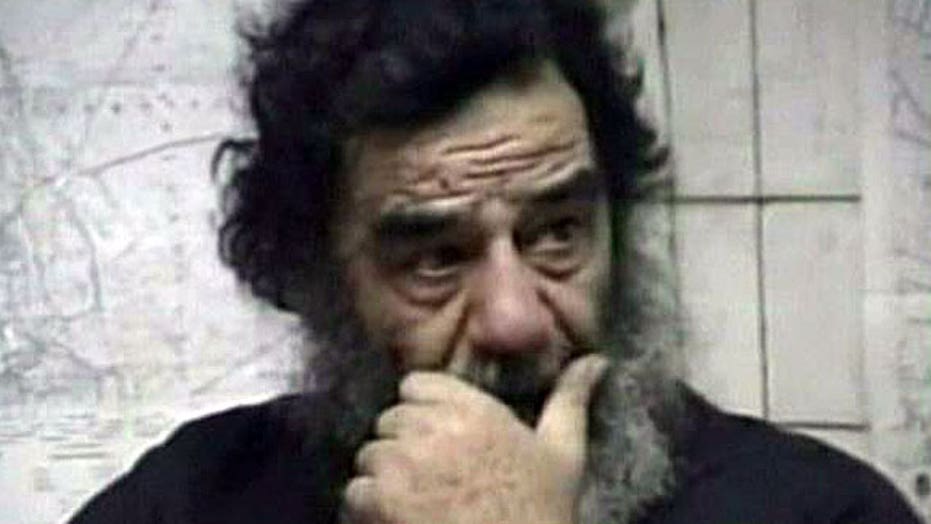 Searching for Saddam: Inside story of dictator's capture

Tactics that led to discovery of Iraqi leader

Nine months into one of the most intense manhunts in history, U.S. forces captured Saddam Hussein on this date 10 years ago as the Iraqi dictator hid in a hole under a farmhouse in Adwar, Iraq.

Hussein, then 63, had been on the run since the fall of Baghdad to U.S. forces on April 9. Videotape of the capture showed Hussein with a long, graying beard and unkempt black hair as he was being examined following his capture.

“He was caught like a rat,” said Maj. Gen. Rey Odierno, of the 4th Infantry Division, during a press conference in Tikrit, Hussein’s birthplace and roughly 100 miles north of Baghdad. “It was ironic that he was in a hole in the ground across the river from the great palaces he built using all the money he robbed from the Iraqi people.”

Another soldier at the scene reportedly said Hussein, who was once obsessed with hygiene, seemed “resigned” to his fate. Some Iraqi journalists gathered in a throng to witness the historic capture shouted, “Death to Saddam!” and “Down with Saddam!” Elsewhere, in Baghdad, radio stations played celebratory music and residents fired gunshots to mark Hussein’s apprehension, which occurred without a single shot fired.

“In the history of Iraq, a dark and painful era is over,” President Bush told the world a day later. “A hopeful day has arrived. All Iraqis can now come together and reject violence and build a new Iraq.”

Bush warned Americans that Hussein’s capture, however, did not signal an end to violence in the country he had controlled for more than two decades.

“We still face terrorists who would rather go on killing the innocent than accept the rise of liberty in the heart of the Middle East,” Bush said on Dec. 14, 2003. “Such men are a direct threat to the American people, and they will be defeated.”

British Prime Minister Tony Blair also hailed the capture, characterizing it as a chance to bring “unity, reconciliation and peace” to all Iraqis.

Roughly 600 troops took part in the hunt, dubbed Operation Red Dawn, according to Lt. Gen. Ricardo Sanchez, the top American general in Iraq. Two other unidentified Iraqis were captured alongside Hussein and authorities recovered two Kalashnikov rifles, a pistol, a taxi and $750,000 in U.S. currency at the site. The stealth operation was launched less than 24 hours after tips were received from local residents, Sanchez said.

A team of 60 soldiers from myriad military units would later cordon off an area of two square kilometers and ultimately uncover a Styrofoam lid atop the hole where Hussein was hiding.

Troops with Task Force 21, a special forces unit established to hunt Hussein, surrounded a farmhouse and looked for the former dictator in two specific locations — dubbed Wolverine One and Wolverine Two — but initially did not locate him.

The search of the home continued and troops discovered something in the ground called a "spider hole” — six to eight feet deep, with enough space to lie down, camouflaged with bricks and dirt and supplied with an air vent to allow long periods inside.

Odierno said Hussein was disoriented and bewildered as he came out of the hole. Based on the fact that he still had clothing in wrappers, Odierno believed Hussein hadn’t been in the hideout for very long.

“I do believe it will have an overall effect,” said Odierno. “Now that he is in coalition custody, there is no doubt that he will never return to power.

Asked about Hussein’s state at the time of his capture, Sanchez said: "He was a tired man, a man resigned to his fate … This success brings closure to the Iraqi people.”

Hussein would later be executed on Dec. 30, 2006, just one month after he was convicted of crimes against humanity — including charges related to the 1982 killing of 148 Iraqi Shi'ites — by a special tribunal and was sentenced to death by hanging.

Weapons of mass destruction, however, were never found in Iraq despite prolonged searches. In July 2003, months after the U.S. led coalition forces into Iraq to topple Hussein’s government, Blair said he had no regrets about ousting the brutal ruler and stood by his country's intelligence that Iraq was seeking uranium from Africa to build nuclear weapons. The White House also continued to press its case that while the intelligence may have been shaky, all intelligence agencies agreed that Hussein was trying to reconstitute his weapons program.

"I take responsibility for making the decision, the tough decision, to put together a coalition to remove Saddam Hussein, because the intelligence — not only our intelligence, but the intelligence of this great country — made a clear and compelling case that Saddam Hussein was a threat to security and peace," Bush told reporters during a press conference at the White House. "We won't be proven wrong. I believe that we will find the truth, and the truth is, he was developing a program of weapons of mass destruction.”