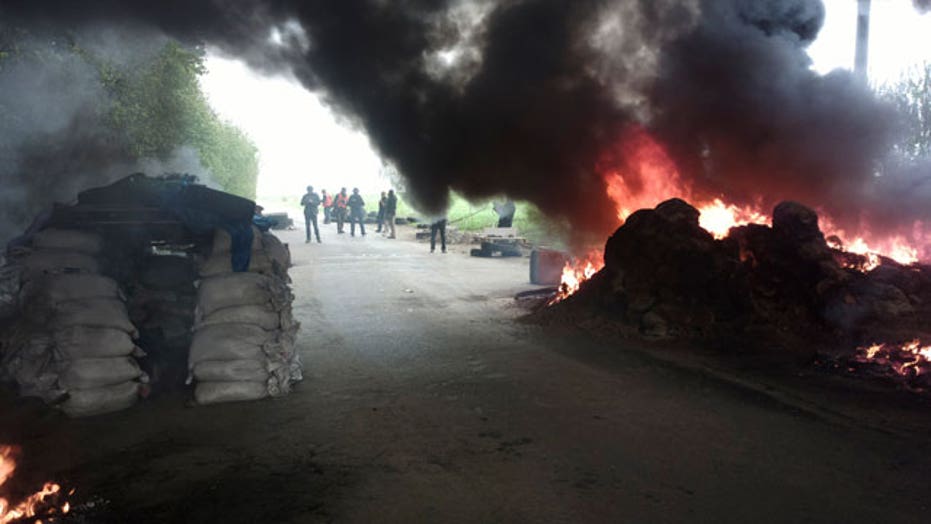 MOSCOW – Accusing the West of plotting to control Ukraine, Russian Foreign Minister Sergey Lavrov declared Friday that the pro-Russia insurgents in eastern Ukraine will only lay down their arms if the Ukrainian government clears out the Maidan protest camp in Kiev.

"The West wants -- and this is how it all began -- to seize control of Ukraine because of their own political ambitions, not in the interests of the Ukrainian people," Lavrov said.

He added the pro-Russia insurgents will disarm and vacate buildings "only if Kiev authorities get down to implementing the Geneva accords, clear out that shameful Maidan and liberate the buildings that have been illegally seized."

"The world has not yet forgotten the second World War, but Russia is already keen on starting a third world war," acting Prime Minister Arseniy Yatsenyuk retorted.

President Barack Obama, speaking to reporters in Seoul, said he will call key European leaders later Friday to discuss what's happened since a deal was reached last week in Geneva to try to de-escalate Ukraine's worst security crisis since the 1991 Soviet collapse.

The West, meanwhile, has accused Russia of fueling the unrest in Ukraine's east and failing to use its influence on the pro-Russia insurgents.

"For seven days, Russia has refused to take a single concrete step in the right direction," U.S. Secretary of State John Kerry said Thursday. "Not a single Russian official, not one, has publicly gone on television in Ukraine and called on the separatists to support the Geneva agreement, to support the stand-down, to give up their weapons and get out of the Ukrainian buildings."

At issue is who is adhering to the Geneva deal and what is an illegal occupation. In Geneva, Russia and Ukraine agreed that all illegal groups in Ukraine should be disarmed and all illegally occupied public buildings and spaces should be vacated.

Pro-Russia militia have seized and been occupying government buildings in more than 10 cities in eastern Ukraine.

In the capital of Kiev, pro-Ukrainian demonstrators continue to operate a tent camp on the city's main square, known as the Maidan, and occupy several buildings nearby, including city hall. Yulia Torhovets, spokeswoman for the Kiev city government, said Ukrainian nationalists have promised to free city hall by the end of this week.

Ukraine authorities, however, say the Kiev occupations are at least tacitly legal because authorities have allowed them.

"Without a doubt, they have all the rights to do this," Viktoriya Syumar, a deputy head of Ukraine's Security and Defense Council, told The Associated Press.

Elsewhere, there were scattered reports of violence Friday. Ukraine's Defense Ministry said a grenade fired from a launcher caused an explosion in a helicopter at an airfield outside the eastern city of Kramatorsk that injured a pilot.

In southern Ukraine, seven people were injured by a blast at a checkpoint set up by local authorities and pro-Ukraine activists outside the Black Sea port of Odessa. Police spokesman Volodymyr Shablienko said unknown men had thrown a grenade at the checkpoint.

Moscow in March took control of Ukraine's Black Sea peninsula of Crimea and annexed it weeks later with the blessing of residents, attracting condemnation of the West as well as sanctions targeting individuals.

Russia's economy is hurting from its involvement in Ukraine.

The Standard & Poor's credit agency on Friday cut Russia's credit rating for the first time in more than five years, citing the flight of capital and the risk to investment in Russia since the Ukraine crisis blew up late last year.

Credit ratings are important because they determine the cost of borrowing on international markets. But Russian Economic Development Minister Alexei Ulyukayev sought to play down the downgrade, calling it "partly politically motivated