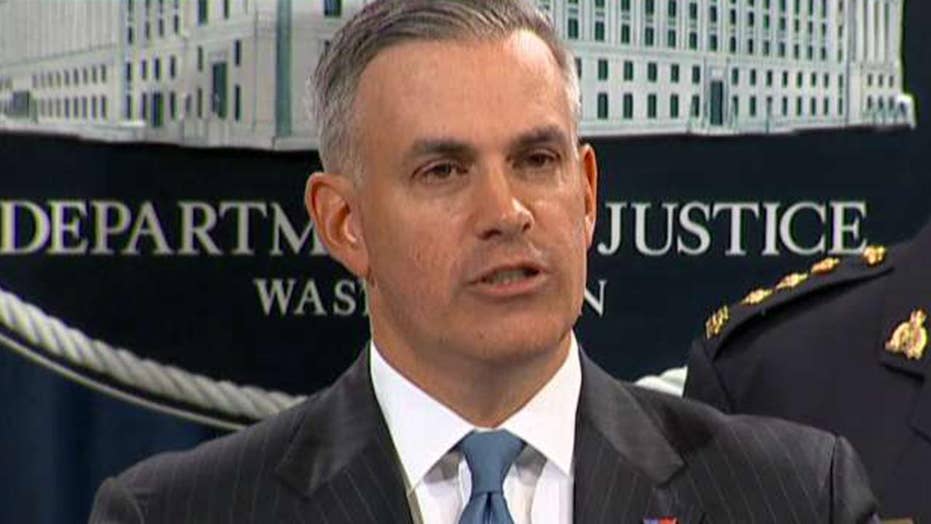 Russia's military spy service has been behind a wave of massive cyber attacks in the recent years, with targets ranging from the international chemical weapons watchdog group to the probe into the downing of a Malaysian Airlines plane over Ukraine, officials said Thursday.

In a report from the United Kington's National Cyber Security Centre, Britsh spy chief said that Russia's GRU has engaged in "indiscriminate and reckless" cyber attacks that have targeted "political institutions, businesses, media, and sport."

"This pattern of behavior demonstrates their desire to operate without regard to international law or established norms and to do so with a feeling of impunity and without consequences," U.K. Foreign Secretary Jeremy Hunt said.

Among the cyber attacks blamed on the GRU by the British on Thursday include the 2016 hack of the Democratic National Committee, whose documents were subsequently published online by WikiLeaks, and the leaking of top athletes' medical records.

An indictment announced in Washington said that the GRU targeted the hacking victims because they had publicly supported a ban on Russian athletes in international sports competitions, and because they had condemned Russia's state-sponsored athlete doping program.. rosecutors said the Russian spies also targeted a Pennsylvania-based nuclear energy company and an international organization that was investigating chemical weapons in Syria and the poisoning of a former GRU officer.

"We are determined to achieve justice in these cases and we will continue to protect the American people from hackers and disinformation," U.S. Attorney General Jeff Sessions said.

In this image released by the Dutch Defense Ministry, four Russian officers of the Main Directorate of the General Staff of the Armed Forces of the Russian Federation, GRU, are escorted to their flight after being expelled from the Netherlands on April 13, 2018, for allegedly trying to hack into the chemical watchdog OPCW's network. (Dutch Defense Ministry)

“Today’s charges further highlight the illegal and aggressive tactics Russia uses to undermine international institutions and wage disinformation campaigns," Senate Intelligence Committee Chairman Richard Burr, R-N.C., and Vice Chairman Mark Warner, D-Va., said in a statement. "We commend the Department of Justice and our Dutch and British allies on the steps they’ve taken to hold Russia accountable. Collectively, we will continue to combat Russia’s illegal activities and make clear that this reckless and belligerent behavior will not be tolerated.”

The allegations by the British and the U.S. came as Dutch officials claimed at a news conference that the GRU tried to hack the Organization for the Prohibition of Chemical Weapons in April before authorities disrupted it.

At a news conference at the Hague, Dutch authorities showed passport pictures of the four people -- three cyber officers and a case officer -- who arrived at Schipol airport from Moscow on April 10, Sky News reported.

Authorities also released photos on Thursday showing the car the group of men used with a wifi antenna and technical equipment in the trunk of a vehicle, thought to be used to hack the network. The men then attempted to destroy smartphones and take their garbage with them to not leave behind any DNA evidence.

After their hacking attempt was disrupted, the four Russian intelligence officers were immediately expelled from the Netherlands, Dutch Defense Minister Ank Bijleveld said.

Britain's ambassador to the Netherlands, Peter Wilson, said the GRU would no longer be allowed to act with impunity. Britain blames the secretive military intelligence unit for the nerve agent attack in March on former Russian spy Sergei Skripal and his daughter, Yulia, in the English city of Salisbury.

Wilson said Russia's actions against the Netherlands-based OPCW in April came as the agency was conducting an independent analysis of the nerve agent used against the Skripals.

Bijleveld added that Dutch officials "have been aware of the interest of Russian intelligence services" regarding the investigation into the downing of MH17 over Ukraine, and have taken appropriate measures.

"We remain very alert about this," she said.

British Prime Minister Theresa May and Dutch Prime Minister Mark Rutte released a joint statement, saying the attacks "demonstrate again the GRU's disregard for the global values and rules that keep us all safe."

Russian President Vladimir Putin has continually denied that Russia was involved in the attempted assassinations of Sergei Skripal and his daughter Yulia. On Wednesday, the Russian leader took a sharper done against the ex-Russian spy, referring to him as a "scumbag."