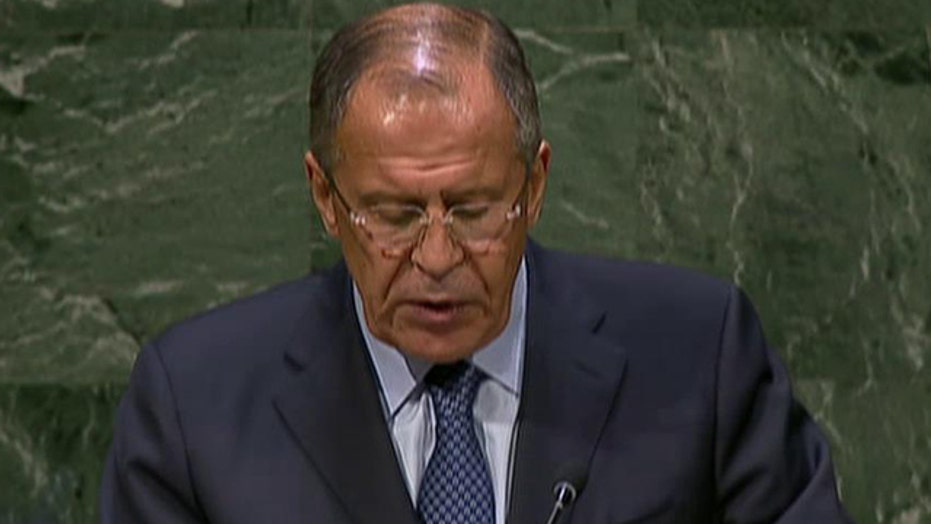 Russian Foreign Minister Sergey Lavrov  issued a blistering attack on the United States and its NATO allies on Saturday at the United Nations, accusing them of being unable to change their Cold War “genetic code” and demanding the U.S. drop its claims to “eternal uniqueness.”

"The U.S.-led Western alliance that portrays itself as a champion of democracy, rule of law and human rights within individual countries ... (is) rejecting the democratic principle of sovereign equality of states enshrined in the U.N. Charter and trying to decide for everyone what is good or evil," Lavrov said in remarks at the U.N. General Assembly on Saturday in the latest example of deteriorating relations between Moscow and the West.

Lavrov's assault appeared to be an extension of the increasingly anti-Western stance of Russian President Vladimir Putin, who is riding a wave of popularity at home with his neo-nationalist rhetoric and policies.

"Washington has openly declared its right to unilateral use of force anywhere to uphold its own interests," Lavrov said. "Military interference has become a norm - even despite the dismal outcome of all power operations that the U.S. has carried out over the recent years."

Lavrov’s list of alleged U.S. failures included the 2003 invasion of Iraq, the war in Afghanistan and the 2011 NATO intervention in Libya.

Speaking at the United Nations General Assembly, Lavrov reiterated Moscow’s view that the crisis in Ukraine was the result of a coup d'etat in that country backed by the United States and the European Union for the purpose of pulling Kiev out of its "organic role as a binding link between" East and West, denying it the opportunity for "neutral and non-bloc status."

Lavrov also said the Russian annexation of Crimea earlier this year was the choice of the largely Russian-speaking population there. Former Soviet leader Nikita Khrushchev transferred control over the strategic Black Sea region to Ukraine from Moscow in the 1950s.

"Russia has, with its annexation of Crimea, unilaterally changed existing borders in Europe and thus broke international law," Frank-Walter Steinmeier said in his address to the world body. He spent considerable time speaking about what the West sees as Russian meddling in Ukraine, a nation on the verge of bankruptcy after a series of corrupt post-independence regimes.

Russia has also criticized the U.S. over airstrikes against the Islamic State, questioning the legality of U.S. and Arab airstrikes taken without the formal approval of Syrian President Assad.