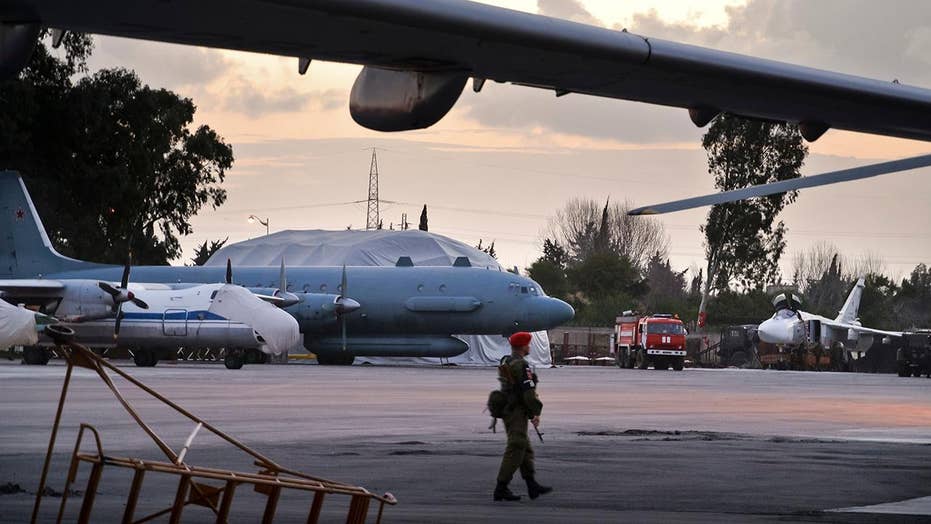 A Russian military spy plane carrying 15 over the Mediterranean Sea was downed by an anti-aircraft missile from Syrian forces. Moscow says the Syrian forces were responding to an Israeli strike that used the Russian plane as cover; Benjamin Hall reports.

A Russian military spy plane carrying 15 over the Mediterranean Sea was downed Monday by an anti-aircraft missile from Syrian forces, prompting finger pointing by Moscow over what is called an "intentional provocation" by Israel.

The Russian Defense Ministry said in a statement Tuesday that the Il-20 "coot" jet was hit 22 miles off the coast as it was returning to the Russian base near the Syrian city of Lattakia.

The Il-20 is a military version of the Il-18 passenger airplane, which first flew in 1957 and is seen as one of the most durable planes from the Soviet era (iStock)

"The Israeli pilots were using the Russian aircraft as a shield and pushed it into the line of fire of the Syrian defense," Ministry spokesman Maj. Gen. Igor Konashenkov said in a statement.

Russia said Israel did not warn it of its operation over Latakia province until one minute before the strikes, which did not give the Russian plane enough time to escape.

RUSSIA: WEST IS OBSTRUCTING AID TO SYRIA, RETURN OF REFUGEES

The Russian defense minister told his Israeli counterpart that Israel is "fully to blame," according to Russian reports.

Konashenkov called Israeli military's actions "irresponsible" and viewed them as "hostile," according to Reuters.

"This absolutely does not correspond to the spirit of Russian-Israeli partnership,” Konashenkov said, according to the wire service, citing Interfax news agency.

The ministry accused the Israeli army of "intentional provocation."

“We reserve the right to take commensurate measures in response,” Konashenkov said, according to the report. He did not specify what the measures would be.

RUSSIA SAYS DRONE ATTACKS ON ITS SYRIA BASE HAVE INCREASED

A recovery operation in the Mediterranean Sea is underway.

Israeli and French fighters were attacking targets at the time, Moscow said, according to Reuters.

A spokesman for France’s military denied any involvement.

The Il-20 is a military version of the Il-18 passenger airplane, which first flew in 1957 and is seen as one of the most durable planes from the Soviet era. Kitted out with electronic equipment and external antennae, it is still used by the Russian Air Force today, according to globalsecurity.org.

Russia has been a key backer of Syrian President Bashar Al Assad and it has two military bases in the country, including one close to the Mediterranean coast.

Capt. Bill Urban, a spokesman for the United States Central Command, referred questions on the incident to the Russian Defense Ministry, the New York Times reported.

“The U.S. was not involved in any strikes in Western Syria or in the shoot down of any planes tonight,” Urban said on Monday evening, according to the paper.

Sima Shine, a former senior Mossad official and ex-deputy director-general at the Strategic Affairs Ministry, told Israel's Army Radio station that the shooting down is problematic both militarily and internally from a Russian perspective.

"I think it will impose very serious restriction on Israel's freedom of activity," she said.