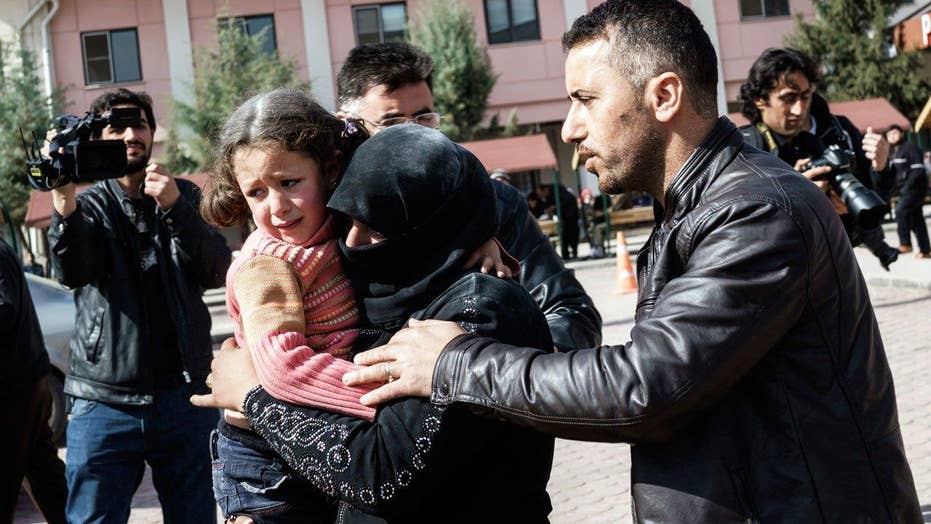 Russia blamed for strikes that hit hospital, school in Syria

Russian warplanes are being blamed for carrying out what is being called a "deliberate attack" on two makeshift hospitals and a school in northern Syria Monday that killed nearly 50 people, according to the United Nations.

Doctors Without Borders -- also known by its French acronym MSF -- said in a statement that the hospital in the town of Maaret al-Numan was hit four times in at least two attacks that were minutes apart.

"This appears to be a deliberate attack on a health structure, and we condemn this attack in the strongest possible terms," said Massimiliano Rebaudengo, MSF's mission chief. "The destruction of the hospital leavesthe local population of around 40,000 people without access to medical services in an active zone of conflict."

In the neighboring Aleppo province, two missiles struck a children's hospital in the town of Azaz, killing at least five people, including pregnant women and children, and wounding dozens, the chief liaison officer at the Syrian Civil defense said.

The hospital was hit four times in two series of at least two attacks within a few minutes of each other #MSF pic.twitter.com/HGFxdWK96S

A third air raid hit a school in a nearby village, killing seven and wounding others.

The Britain-based Syrian Observatory for Human Rights said the attacks were carried out by Russian warplanes. The Observatory, which tracks the casualties in Syria's five-year civil war, said nine people were killed, including a nurse and eight civilians, and dozens were also wounded.

The airstrikes came as the White House confirmed the President Obama had spoken Sunday with Russian President Vladimir Putin, calling on Russia to play "a constructive role by ceasing its air campaign against moderate opposition forces in Syria."

U.S. Military Spokesman Col. Steve Warren, on Twitter, said the destruction of the Doctors Without Borders hospital was "terrible news."

He added that the only U.S. coalition-led airstrikes carried out in Syria Monday were in the cities of Raqqa and Hasakah.

MSF said the hospital had 30 beds, 54 staff members, two operating theatres, an outpatients department and an emergency room. The statement added that MSF has been supporting the hospital since September and covered all its needs, including providing medical supplies and running costs.

Russian Prime Minister Dmitry Medvedev issued a blanket denial over the weekend that Moscow was targeting civilians and civilian facilities within Syria, The Guardian reports.

But since the start of the Russian campaign that launched in October, the NGO Physicians for Human Rights documented seven Russian attacks on medical facilities in Syria, according to the newspaper.

#Idlib: “The destruction of the hospital leaves around 40,000 people without medical services." #Syria pic.twitter.com/6NSaD5qy48

Last week, MSF said at least 13 health facilities in Syria have been attacked this year alone.

Syrian troops have been on the offensive over the past week in the country's north under the cover of Russian airstrikes. The ground offensive has been focused on the northern province of Aleppo while Monday's airstrike struck the clinic in the nearby Idlib province.

"The entire building has collapsed on the ground," said opposition activist Yahya al-Sobeih, speaking by telephone from Maaret al-Numan. He added that "all members of the medical team inside are believed to be dead."

Paramedics and volunteers were now working on removing the rubble, he added. The four-story building once was a cement company but had served as a makeshift clinic during the war, said al-Sobeih.

In Turkey, the private Dogan news agency reported that more than 30 of those wounded in Russian air strikes in Azaz, primarily children, were transferred to a hospital in southern Turkey. It showed footage of ambulances arriving at the Kilis State hospital and medical personnel unloading children on stretchers and a girl wrapped in a blanket as well as a handful of adults.

Meanwhile in Brussels, European Union officials on Monday called on Turkey to halt its military action in Syria after Turkish forces shelled positions held by a U.S.-backed Kurdish militia over the weekend.

The EU's foreign policy chief, Federica Mogherini, said that "only a few days ago, all of us including Turkey, sitting around the table decided steps to de-escalate and have a cessation of hostilities."

She said more fighting "is obviously not what we expect."

Dutch Foreign Minister Bert Koenders, whose country holds the EU's rotating presidency, said "we have the plan for a cessation of hostilities and I think everybody has to abide by that."

Syria's main Kurdish faction, the People's Protection Units, has been most effective in combating the Islamic State group, but Turkey appears uneasy over the group's recent gains.