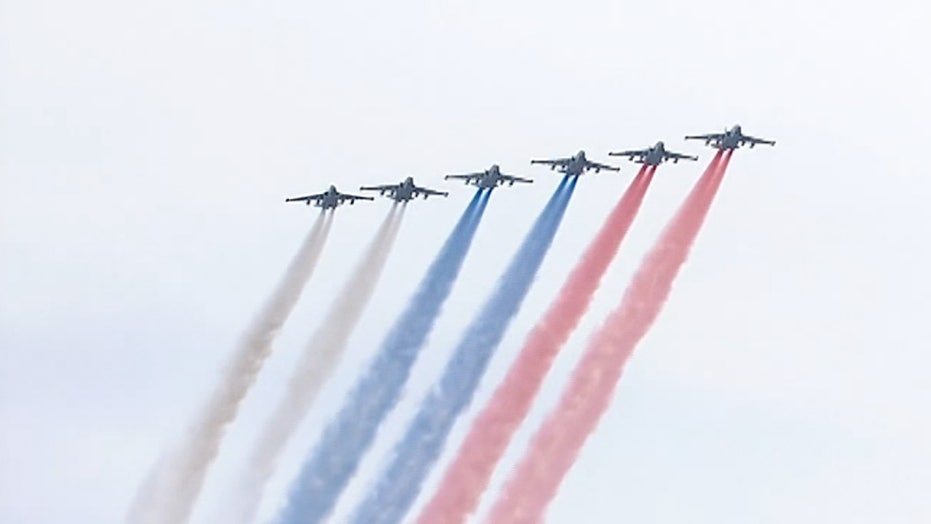 Russia held a stripped-down Victory Day celebration Saturday as its coronavirus cases spiral, making it the fifth highest-infected country in the world.

When Nazi Germany signed its surrender on May 8, 1945, it was already May 9 in Russia. As such, Russia proceeded with commemorations on Saturday while the rest of Europe had already celebrated on Friday.

President Vladimir Putin laid flowers at the tomb of the Unknown Soldier outside the Kremlin and gave a short address honoring the valor and suffering of the Soviet army during the six-year conflict. The ceremony was the first public appearance by Putin in about a month.

“We will, as usual, widely and solemnly mark the anniversary date, do it with dignity, as our duty to those who have suffered, achieved and accomplished the victory tells us,” Putin said.

“There will be our main parade on Red Square, and the national march of the Immortal Regiment — the march of our grateful memory and inextricable, vital, living communication between generations.”

In this two photo combination picture, top photo shows People carry portraits of relatives who fought in World War II, during the Immortal Regiment march through the main street toward Red Square celebrating 74 years since the victory in WWII in Red Square in Moscow, Russia on taken on Thursday, May 9, 2019, and bottom photo shows an almost empty main street during the 75th anniversary of the Nazi defeat in World War II in Moscow, Russia, Saturday, May 9, 2020. (AP Photo/Denis Tyrin)

The Red Square military parade and The Immortal Regiment were postponed as part of the measures to combat the pandemic. Russia has confirmed a total of 198,676 cases as of Saturday, with 1,827 deaths.

Russia recorded its peak numbers of new cases, with 11,231 new cases confirmed on Thursday. Russia has recorded over 10,000 cases a day for the entire week, rapidly transforming Russia into the fifth-most infected country in the world.

Russia had stoked expectations of the celebration in the run up due to the fact that it is the 75th anniversary of the Nazi defeat in World War II, but the only remnant of Russia’s typical military display was a flyover of central Moscow by 75 warplanes and helicopters.

Meanwhile, across the border in Belarus, full celebrations proceeded with tens of thousands in attendance. A full military parade of roughly 3,000 soldiers marched through Minsk.

Few of the spectators wore any protective equipment, and no social distancing restrictions were observed.

People attend the Victory Day military parade that marked the 75th anniversary of the allied victory over Nazi Germany, in Minsk, Belarus, Saturday, May 9, 2020. Belarus remains one of the few countries that hadn't imposed a lockdown or restricted public events despite recommendations of the World Health Organization. (AP Photo/Sergei Grits)

President Alexander Lukashenko, who has dismissed concerns about the virus as a “psychosis,” said at the parade that Belarus’ ordeal in the war “is incomparable with any difficulties of the present day.”

Belarus has suffered a smaller impact from the virus, but the situation is growing worse with each day. As of Saturday, Belarus has confirmed 22,052 total cases, with 126 deaths. Belarus confirmed 933 new cases on Saturday alone.