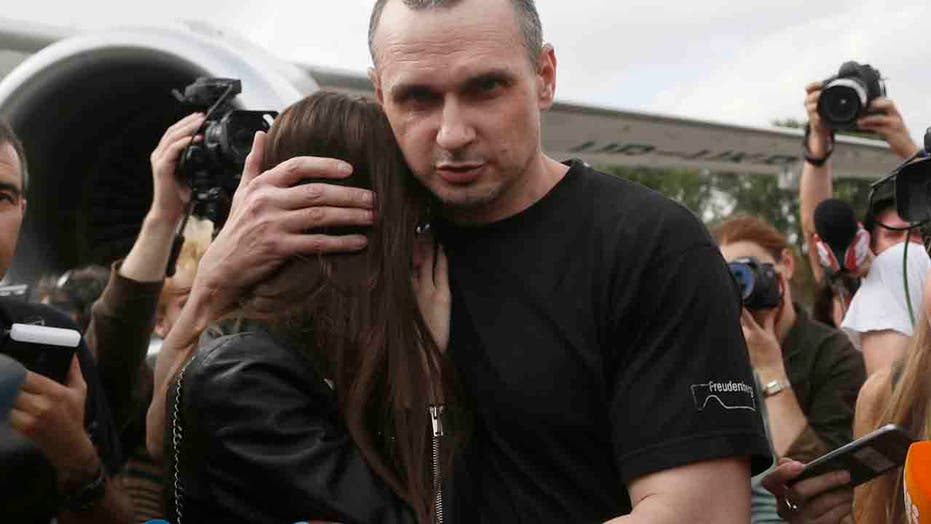 Some of the highest-profile prisoners caught up in a bitter standoff between Ukraine and Russia have been released in a major prisoner exchange.

The 70 people - 35 from each country - arrived in their respective countries Saturday after their overnight release, marking a deal that could help advance relations between the two countries and end 5 years of fighting in Ukraine’s east.

President Trump praised both countries in a tweet Saturday morning, calling it “perhaps a first giant step to peace.”

Among the prisoners released by Russia was Ukrainian film director Oleg Sentsov, whose conviction for preparing terrorist attacks was strongly denounced aboard.

Also released were 24 Ukrainian sailors taken with a ship the Russian navy seized last year in the Kerch Strait, located between the Black Sea and the Sea of Azov next to Russia-annexed Crimea.

"Hell has ended; everyone is alive and that is the main thing," Vyacheslav Zinchenko, 30, one of the released sailors, said.

PUTIN AGAIN THREATENS TO DEVELOP PREVIOUSLY BANNED MISSILES IF US DOES

Ukrainian President Volodymyr Zelenskiy greeted the freed prisoners as they stepped down from the airplane that had brought them from Moscow to Kyiv's Boryspil airport.

"We have made the first step. It was very complicated. Further, we will come closer to the return of our (war) prisoners," Zelenskiy said of the prisoner exchange.

Most of the ex-detainees appeared to be in good physical condition, although one struggled down the steps on crutches and another was held by the arms as he slowly navigated the steps.

The prisoners released by Ukraine included Volodymyr Tsemakh, who commanded a separatist rebel air defense unit in the area where a Malaysian airliner was shot down in 2014, killing all 298 people aboard.

Volodymyr Tsemakh, suspected of involvement in the downing of the Malaysia Airlines flight MH17 plane in 2014, stands inside a defendants' cage during a court hearing in Kiev, Ukraine September 5, 2019. (Reuters)

At Moscow's Vnukovo airport, the released prisoners remained on the plane for about 15 minutes for unknown reasons. When they came off, a bus drove them to a medical facility for examination.

Russia said it would release a full list of its citizens freed by Ukraine later Saturday.

The exchange comes amid renewed hope that a solution can be found to the fighting in Ukraine's east that has killed 13,000 people since 2014.